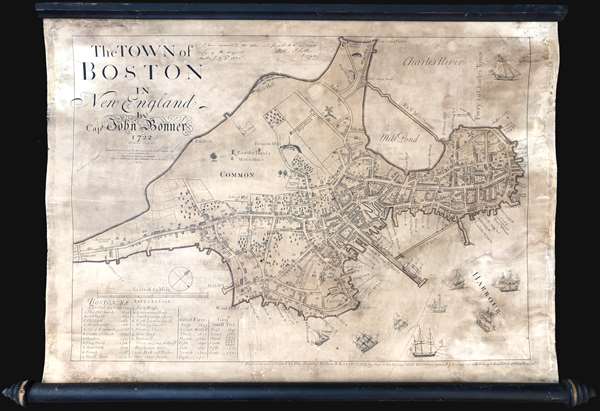 Smith edition of the first printed map of Boston!

This is George Girdler Smith’s (1795-1878) rare 1835 reissue of John Bonner’s 1722 map of Boston. Considered the first printed map of Boston, Bonner’s map covers the peninsula of Boston as it appeared in the early 18th century. The map includes a wealth of fascinating information about pre-Revolutionary War Boston, including street layouts, the Boston Common, Beacon Hill, the Mill Dam, churches, public buildings, and more. Bonner also illustrates Boston's importance as a port city, detailing the location of docks, shipyards, wharves, and ropewalks. An index in the lower left helps to identify various locales on the map. The harbor around Boston is full of engraved sailing ships – evidence of Boston’s lively trade and prosperity.

Smith’s 1835 reissue is far from a slavish copy of the original an includes various updates to reflect changes made to Boston in the subsequently 100+ Years, making the map unique and significant in its own right. According to the Massachusetts Historical Society,

The 1835 version of the map also includes alterations to the topography of Boston since the first printing of Bonner's map in 1722. These alterations--new streets, buildings, and waterfront developments--appear in red, blue, and green ink. Alterations in red occurred between 1722 and 1733; in blue, between 1734 and 1743; and in green, between 1743 and 1769. The map does not reflect changes made to the Mill Pond area near the North End which the city filled in 1804 with earth taken from Beacon Hill. The map includes an index to points of interest and chronological lists of ‘Great Fires’and ‘Genll. small pox.’

The Smith version also features an amusing error, as it identifies Bonner’s age as 60, when in fact, it was 80 when the original was made.

Smith based his reissue on the 1725 3rd sate of the Bonner map, of which only a single surviving example, at the Massachusetts Historical Society, remains extant.

The present example is attractively presented on its original 19th century rollers and has been fully stabilized and restored.

John Bonner (1643 - January 30, 1726) was a captain, navigator, map-seller and shipwright active in Pre-Revolutionary War Boston. He was admired for his skill in navigation and was considered one of the best pilots in North America. Bonner was married to Mary Clarke Bonner (1665 - 1697), daughter of Elder Jonas Clark of Cambridge. He was survived by his wife and son, also John Bonner. His is best known for producing the first printed map of Boston, in 1722. Learn More...


George Girdler Smith (September 8, 1795 – December 18, 1878) was an American map and bank note engraver based in Boston throughout the 19th century. Smith was born in Danvers Massachusetts, the son of George Girdler Smith Sr. of Danvers and Sarah Girder of Marblehead. He was the grandson of Silas Smith, a privateer in the early part of the American Revolutionary War. He studied engraving under Abel Bowen Smith until 1815 and subsequently maintained an engraving studio on Boston’s Washington Street. In 1823 (although some suggest as early as 1818) he partnered with fellow Bowen apprentice, William B. Annin to found ‘Annin and Smith’. They were one of Boston’s earliest lithographic printers. As an engraver he worked with several other engravers and printers. In the 1850s he partnered with Charles A. Knight and George H. Tappan as ‘Smith, Knight, and Tappan’. In addition to his engraving work, he was an active churchman and a high-ranking Freemason Learn More...