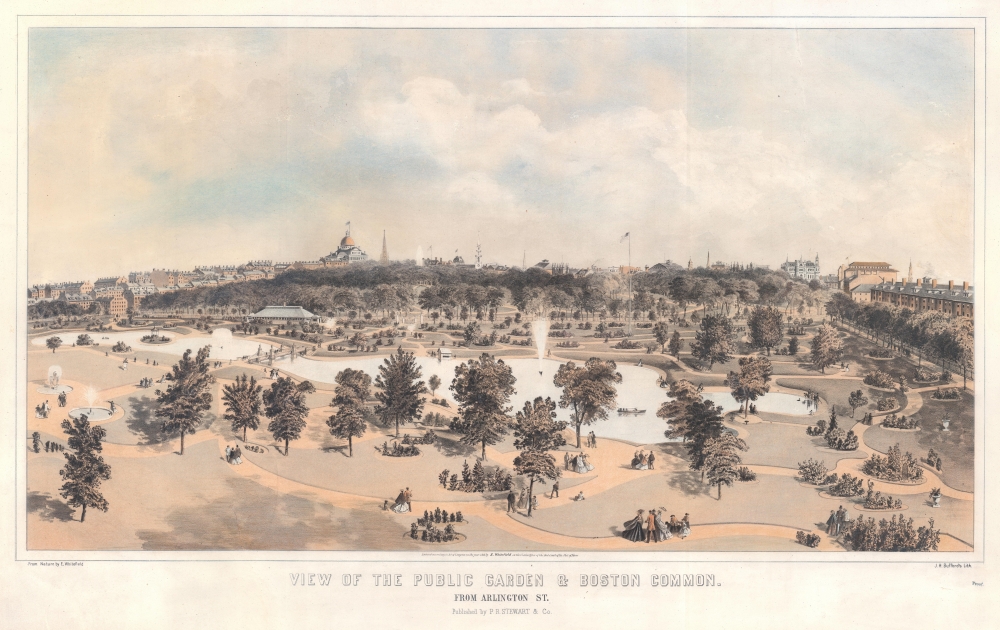 This is an 1866 Edwin Whitefield view of Boston Common and the Public Garden. Looking east over the area from a point above Arlington Street, the Public Garden and its Duck Pond dominate the foreground. Bostonians walk the Public Garden's many paths and enjoy their lovely park. The dome of the Massachusetts State House appears on the left in the background at the end of a row of apartment buildings. The Park Street Church's white steeple soars above Boston Common's trees near center. The steeple of the Old North Church is illustrated to the right of the Park Street Church steeple.

The Boston Common, more commonly the 'Common', is the oldest city park in the United States. It occupies some 50 acres of land in central Boston bounded by Tremont Street, Park Street, Beacon Street, Charles Street, and Boylston Street. The common land predates the founding of Boston and was originally owned by European settler William Blaxton (1595 - 1675). For years Blaxton lived there alone, before inviting the settlers of nearby Charlestown, which were suffering from a water shortage, to relocate to the Shawmut Peninsula. Charlestown founder Isaac Johnson and his settlers promptly relocated. One of Johnson's last acts before his death was to rename the new settlement 'Boston. As Boston grew, the need for public lands was fast recognized. Governor John Winthrop (1587/88 - 1649) purchased the former Blaxton land through a one-time tax on Boston residents amounting to 6 shillings (around $50 adjusted) a head. This land became a town commons open to public grazing and now forms the bulk of Boston Common.

This view was drawn and copyrighted by Edwin Whitefield, lithographed by J. H. Bufford, and published by P. R. Stewart and Company in 1866. We note three cataloged examples in OCLC: American Antiquarian Society, the State Library of Massachusetts, and the Boston Athenaeum.

Edwin Whitefield Pennie (September 22, 1816 - December 26, 1892) was an English-American landscape painter active in the middle part of the 19th century. Whitefield was born in East Lulworth, England, the son of a Dorset schoolmaster. He emigrated to America, probably Canada, in 1835, leaving his first wife (Maria) and son in England. Some speculate that the move may been motivated by unwanted pressure from his family to embrace onerous medical or legal work. He taught school in Canada, and there married again, taking a second wife, Kate, who was probably one of his students. Seeking to develop as an artist, he moved to the United States around 1837 or 1838, establishing himself as an itinerant traveler/artist/journalist. He travelled up and down the Hudson, creating views of various American cities along the river, doing commission work, and selling lithographs of his work by subscription. This turned into a series of views of North American cities, of which there were at least 37, possibly more. Among the cities in his portfolio are views of Brooklyn, Toronto, Quebec City, Montreal, Ithaca, Jamestown, Poughkeepsie, Williamsburg (Brooklyn), Niagara, Philadelphia, Salem, Albany, and Boston, among many others. He separated from Kate, his Canadian wife, in 1853. Whitefield moved to Minnesota in 1856, settling in Kandotta with a new wife, Lillian, to engaged in land speculation. He had some success there, where Whitefield township, established in 1870, was named after him. Nearby Lake Lillian is named after his third American wife. He briefly lived in Chicago around 1861, before moving to Reading, Massachusetts in 1863 to paint the historic homes of New England, a project that he obsessed over until 1889, when the three-volume Homes of our Forefathers was finally published. In addition to his views, Whitefield is said to have published maps (we have not identified any), playing cards, and patented the Notosericum embroidery stamping technique. Whitefield returned to England in 1888, but returned to Massachusetts in 1892, settling in Roslindale, then in Dedham, where he died. Learn More...