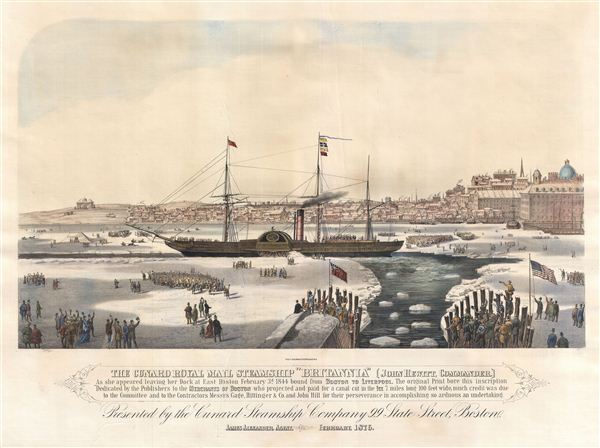 A fine 1876 view of Boston Harbor published by Ferdinand Meyer. This view, centered on the Royal Mail Steamship RMS Britannia, commemorates the exceptionally cold winter of 1844. By February of that year Boston Harbor was completely closed by ice. Commerce, long Boston's lifeblood, was largely being directed to New York and other cities further south. The Merchants of Boston, feeling the pinch, banded together to hire John Hill and the firm of Gage, Hittinger and Company to clear a channel some 7 miles long from the Boston's shipping docks to open water. This impressive achievement revived Boston's endangered shipping economy. Among the first ships to leave Boston via the channel was the RMS Britannia, a Royal Mail Steamship of the Cunard Line.

The 'British and North American Royal Mail Steam Packet Company,' later renamed after its founder, Cunard, acquired the British government contract to deliver the U.S. Transatlantic mail in 1838. To facilitate the contract they commissioned three steamships. With three majestic masts complementing a great smokestack, the first and largest of these was the RMSBritannia, commissioned in 1840. The RMS Britannia was also first steamship in the Cunard Line. The Britanniasailed from Liverpool, in england to New York, thence to Boston, from which it returned to Liverpool, a round trip journey of about 13 days.

This lithograph view of the event was commissioned by James Alexander. Alexander represented Cunard's interests in Boston and was a passionate advocate for the development and expansion of Boston Harbor. He was responsible for construction of the Boston Cunard Warf as well as east Boston's first grain elevator. Alexander commissioned this view in 1876 to celebrate the tenacity of the Boston Merchant class and possibly to woo the directors of the Cunard Company back to Boston, which they had abandoned as a freight port in 1874.

Ferdinand Mayer (c. 1817 - c. 1877) was prosperous lithographer based in New York during the latter part of the 19th century. Mayer was born in Germany but fled to the United States following the 1848 March Revolutions that swept through the German Confederation. Initially Mayer was associated with various partners including Nagel and Korff - also German immigrants. By 1855 he has established himself at 96 Fulton Street and, within a few years, expanded to the neighboring property at 98 Fulton Street. Meyer produced an enormous corpus of varied work that included music sheets, bank notes, broadsides, maps, and views. His career was probably jumpstarted through an early partnership with the important cartographer Henry Walling, many of whose maps and atlases bear the Ferd. Mayer imprint. His most important publicaiton is mostly likely Egbert L. Vielé’s 1865 Topographical Map of the City of New York, one of the most important and influential maps of New York City ever published. The Mayer imprint appears on documents as, variously, Ferd. Meyer, F. Mayer, and Mayer and Sons. Learn More...

Good. Backed on archival linen. Professionally repaired tear through center of image - see zoom. Margin repairs.
Looking for a high-resolution scan of this?