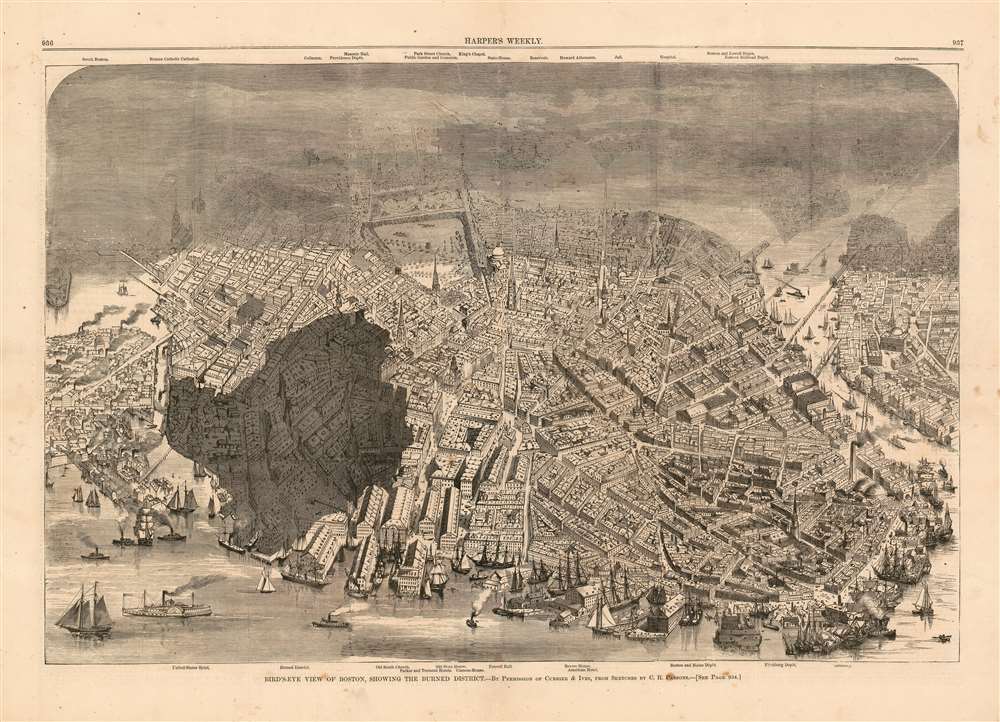 The first view to illustrate the devastation following the Great Boston Fire of 1872.

A dramatic 1872 view of Boston, illustrating the extent of the devastation caused by the Great Boston Fire of November 7-8, 1872. Issued just three weeks later, this is one of the first depictions of the fire. In order to satisfy the immediate demand for information about the disaster, Harper's Weekly turned to Currier and Ives, who had already contracted illustrator Charles R. Parsons to collect material to produce a grand view of the city. Parsons - already employed as head of Harper's art department - was in a unique position, consolidate the resources of both firms to swiftly produce this timely view. It therefore predates the famous grand format Currier and Ives The City Of Boston by a year.

The city is viewed from the northeast, displaying the bustling waterfront, with its ships,, wharves, warehouses and shipyards. The city's bridges link Boston with Charlestown, Cambridge, Dorchester, and the rest of the mainland fading into the background. Many, if not all of the landmarks to be highlighted in the 1873 view are shown here, twenty seven of which are named at the top and bottom of the view including Faneuil Hall, Old South Church, and Revere House. Marked on the bottom, and shaded on the map itself, is 'Burned District,' the area destroyed by the fire. It is interesting to note that the 1873 map - based on the same draughts as this one - is derived from pre-fire surveys, presenting the city as if it had never happened.

The map was a two-page spread in the November 30, 1872 issue of Harper's Weekly. It is scarce on the market. OCLC shows a single copy, at the Leventhal Map Center.


Charles Parsons (1821 - November 9, 1910) was an American artist and lithographer active in New York. Parsons was born in Hampshire, England in 1821. He emigrated to the united States at 9, apprenticing as a lithographer under George Endicott from 1833. Parsons produced numerous views and lithographs for Endicott and Company, but also engraved or Nathaniel Currier, later Currier and Ives. In 1863 he became the art director for Harper’s Publishing, a position he held until 1889, when he retired. Parson's was influential in the development of American illustration and lithography. His son, Charles R. Parsons, was also an artist based first in Manhattan, then Brooklyn. Learn More...