1763 Terreni Map of Boston, Massachusetts and its Vicinity 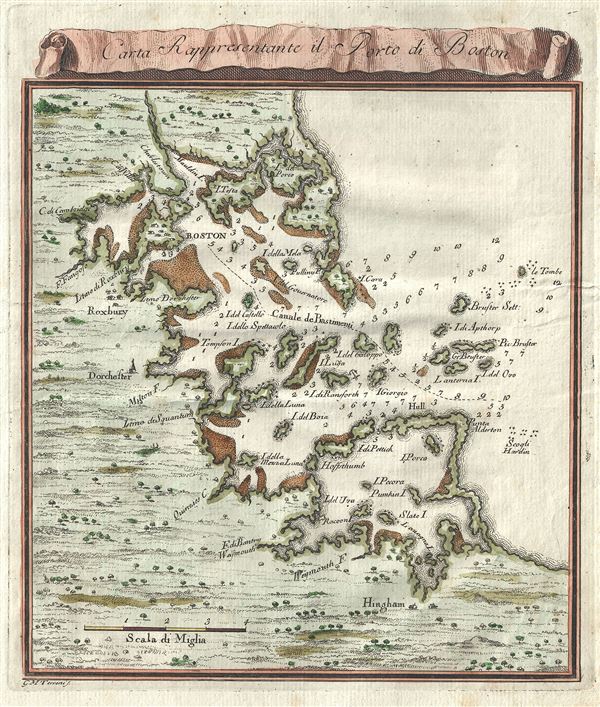 1763 Terreni Map of Boston, Massachusetts and its Vicinity

Issued between the French and Indian War and the American Revolutionary War, this is a fascinating 1763 map of Boston, Massachusetts, and its vicinity by G. M. Terreni. Centered on Boston Harbor, this map covers the Boston area from Hingham to Charlestown. Terreni offers extensive detail both inland as well as along the coast, noting several islands, capes, shoals, reefs and depth soundings. Relief is beautifully rendered in profile. This map was issued by G. M. Terreni in 1763 and published in the Masi's Atlante dell'America.

Giuseppe Maria Terreni (1739 - 1811) was an Italian engraver, merchant, artist, and painter active in the middle to latter part of the 19th century. Terreni was born in Livorno, Italy, where he completed most of his artistic works. Between 1783 and 1785 Terreni executed a series of 18 engraved city views of Livorno in the style of Giuseppe Zocchi and Jakob Philipp Hackert. He also published several engraved maps and views in partnership with Lodovico Coltellini for issue in various Italian atlases. He was also, apparently, involved somewhat loosely with the antiquities trade.