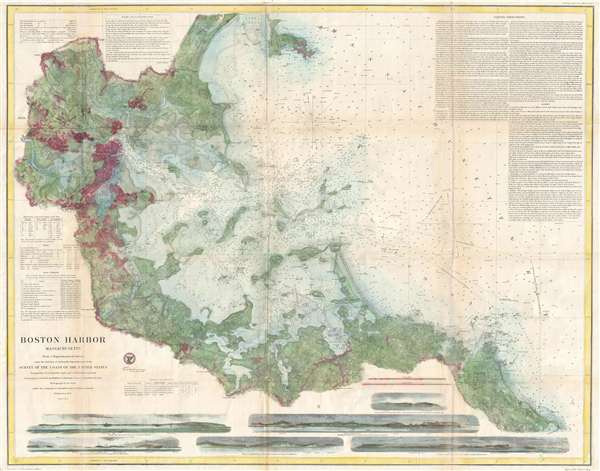 This is a hand colored 1857 U.S. Coast Survey chart of Boston Harbor. The chart depicts from Massachusetts Bay through Boston Bay and into Boston Harbor and Boston itself. The detail of the chart is incredible. The bay is shown in precise detail; all the islands are labeled and the coastline of these islands and of Massachusetts are rendered with an intense attention to detail. Inlets, coves and bays abound, as well as river mouths. Boston is not the only city which is labeled, Cambridge, Charleston, Winnissimmet, Quincy Village, Newcomb's Landing and several others are depicted on the chart. The wharves of Boston Harbor are easily distinguished.

More information is included on this chart than simply the depiction of the bay and harbor. Depth soundings are given throughout the bay and harbor. A large paragraph of sailing instructions dominates the upper right corner, followed by a long list of ranges and dangers. 'Remarks on the set of the Tidal Currents' sit above Centre Village and several other urban areas along the upper border. Along the left side, near Roxbury, is a table of abbreviations used on the chart, as well as a table of tides and tidal currents. Along the bottom margin is a table of lighthouses and light vessels, as well as six different coastal views to aid mariners in navigation of the bay and harbor.