1868 Valentine Map of The Bowery in Old New York City 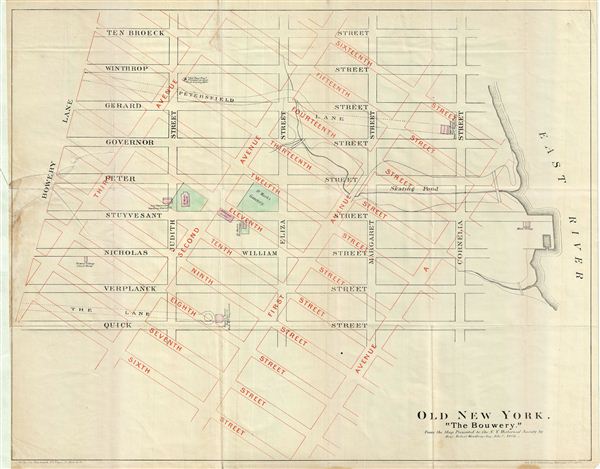 1868 Valentine Map of The Bowery in Old New York City

This is a fascinating example of the 1868 map of the Bowery, New York City. The map overlays the pre 1811 street grid with the modern street grid as laid out by the Commissioner's Plan. The contemporary grid covers the neighborhood in Lower Manhattan from Sixteenth Street to Sixth Street and from Third Avenue to Avenue A. The old street grid is also covered from Bowery Lane to Cornelia Street and from Ten Broeck Street to Quick Street. This map identifies various important landmarks, including the Bowery Village School House, St. Mark's Parsonage, Bowery House, and the Historical Society. St. Mark's Cemetery and St. Mark's Church (which used to be the Stuyvesant Manor House) are now the site for the St. Mark's Church-in-the-bowery. The map marks the site for Governor Stuyvesant's Dwelling, burnt down in 1777 and Petersfield, Peter Stuyvesant's mansion. The site of the 'Old Pear Tree,' planted in 1647 from a Dutch seedling and considered to be the most popular tree in all of America at the time, which was later uprooted in 1867, is marked. Today, spurred by the Lower east Side Revival of the 1990s, the Bowery is a vibrant neighborhood full off fine restaurants, nightclubs, and designer boutiques. This map was engraved in 1868 by George Hayward based upon on 1862 manuscript map presented to the New York Historical Society in 1862. Prepared for the 1868 edition of D. T. Valentine's Manual.

Good. Original fold lines visible. Minor wear near left margin and a repaired tear extending 2 inches into the printed area. Professionally flattened and backed with archival tissue.
Looking for a high-resolution scan of this?