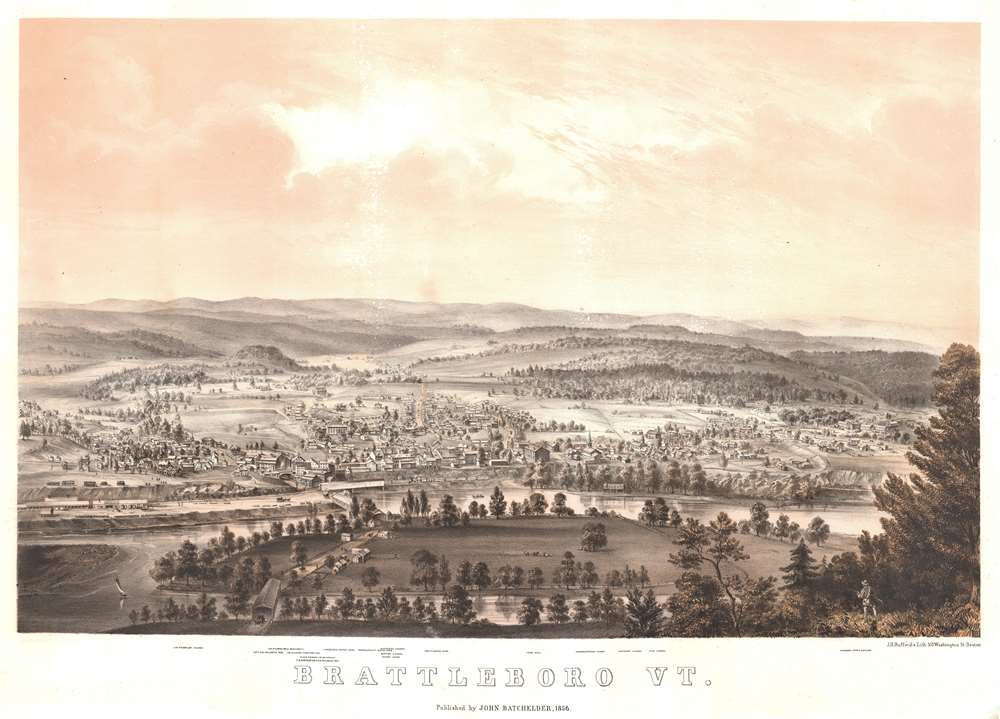 Brattleboro by one of the Great American viewmakers.
$2,750.00

A striking 1856 Batchelder (Bachelder) / Bufford two-color chromolithograph bird's-eye view map of Brattleboro, Vermont. The view looks east on Brattleboro from Wantastiquet Mountain, just across the Connecticut River in New Hampshire. The Green Mountains rise in the background, while in the foreground, a hunter on Wantastiquet Mountain looks for game. Brattleboro occupies the center, with important buildings, including churches, state buildings, and notable businesses, labeled below the view. There are several covered bridges, for which Vermont remains famous, servicing both roads and the railroad. Here, the Vermont and Massachusetts Railroad, which reached Brattleboro in 1849, steams into town.

Island Park, the large island in the Connecticut River, fills much of the foreground. Located between Brattleboro, VT, and Hinsdale, NH, Island Park was a 22 acre island near the mouth of Whetstone Brook. It was an ideal connection point between the two cities, and, in 1804, the two covered bridges shown here, were constructed by a private investment concern - thus establishing a profitable east-west trade corridor. The rest of the island, as here, was dedicated pasturage. A flood just a few years after this view was issued, devastated the island, leaving just 8 acres of land. In the 1880s it became the site of a brewery and saloon. Being technically in New Hampshire, although physically closer to Brattleboro, the brewery flew in the face of Vermont's Temperance laws - and was considered a den of vice.

This view was drawn by John Bachelder (here his name is alternately spelled as 'Batchelder', an affectation he later dropped) and published by John H. Bufford of Boston in 1856. It is based on an ambrotype photograph produced by John Lyman Lovell, whose imprint is just barely visible in the lower left. Deák notes only one example, at the New York Public Library. We note an additional example at the Boston Atheneum and a third in private hands.


John Lyman Lovell (December 17, 1825 - December 3, 1903) was an American artist and photographer. Lovell was born in Holden, Massachusetts. He studied at Amherst College where he was the 'Class Photographer'. Afterwards, he lived with his family near Brattleboro, Vermont. Later he relocated to Newport, New Hampshire. His work on Amherst, entitled the 'Amherst Picture Gallery' was the first in Hampshire County. His work was featured in exhibitions at the Musée National des Beaux-Arts du Québec and the Galerie Roger Bellemare. Lovell died in Newport, New Hampshire. Learn More...

Reps, John, Views and Viewmakers of Urban America (University of Missouri, Columbia, 1984), #4043.
Looking for a high-resolution scan of this?