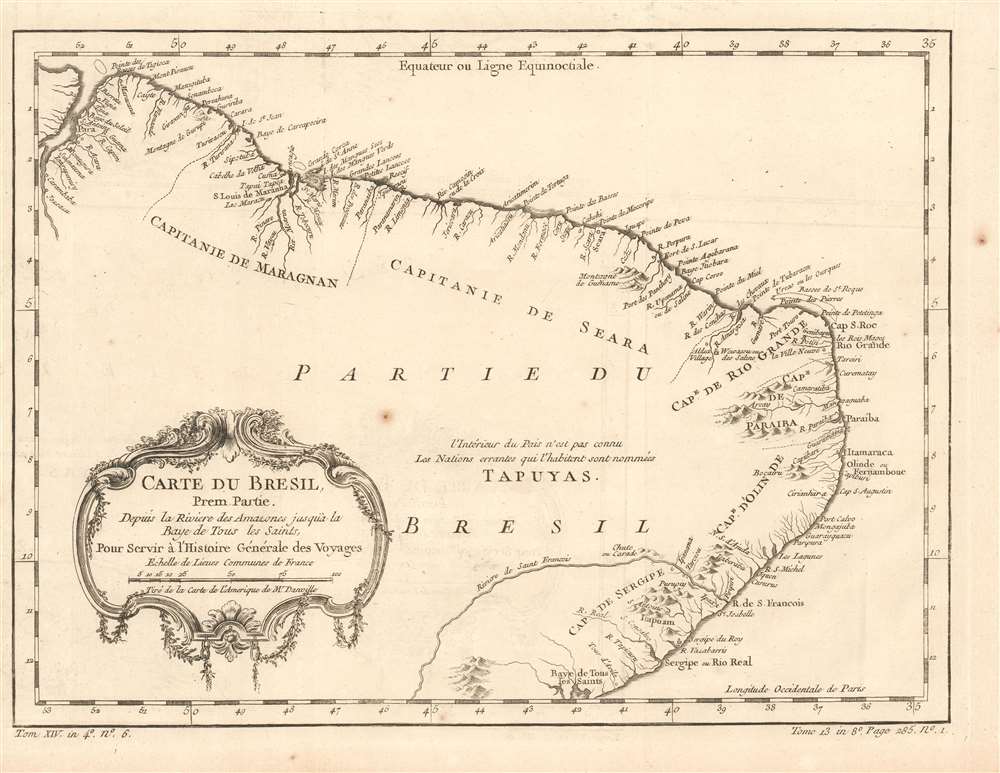 This is a beautifully engraved 1780 map of the coast of Brazil, extending from the mouth of the Amazon River to the Baía de Todos los Santos. It names and marks the coastal borders of the Portuguese colonial Captaincies of Maranhão, Ceará, Rio Grande do Norte, Paraiba, Olinda (actually Pernambuco, of which Olinda was the capital), and Sergipe. Coastal settlements and the mouths of rivers are named, and prominent mountain ranges near coastal areas are shown pictorially. While most rivers are not shown at length, the Rio São Francisco does appear, and its sharp turn to the southwest is suggestive of the actual course of that river. Waterfalls are marked in the vicinity of the Paulo Afonso Falls, and settlements are named along the lower course of the river.

Away from the coastline the map is largely blank, with a text note in French indicating that The interior of the country is unknown; the nomadic nations who live in it are named 'Tapuyas.' This refers to the Pira-tapuya, who now live in the extreme headwaters of the Amazon tributary regions along the Vaupés River in Colombia and in the state of Amazonas, Brazil. Their estimated numbers, as of 2014, have dwindled to less than two thousand.

The separate map appears on the market from time to time but is somewhat neglected in institutional collections: OCLC lists perhaps fifteen examples of this map in its various editions. La Harpe's Abrégé de l'histoire générale des voyages is well represented in institutions.