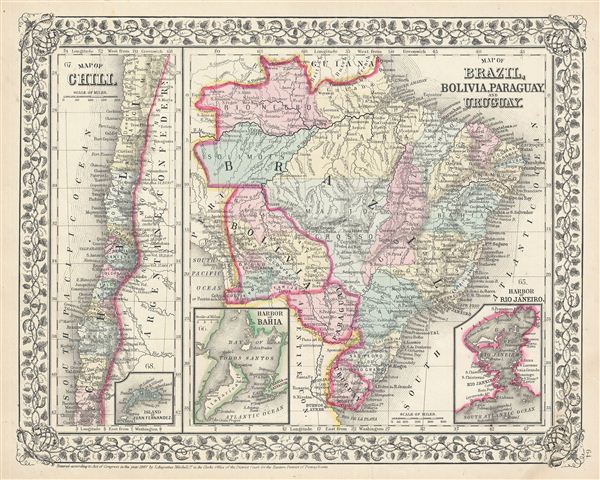 A beautiful example of the legendary American map publisher Samuel Augustus Mitchell Jr.'s 1867 map of Brazil, Bolivia, Paraguay, Uruguay and Chili. The map is divided into two parts. The map on the left depicts Chile with an inset map of the Island of Juan Fernandez. The right hand maps show Brazil, Bolivia, Paraguay and Uruguay with inset plans of the Harbor of Bahia and the Harbor of Rio de Janeiro. Shows Bolivia with an outlet to the Sea and Patagonia as separate from the Argentine Republic and Chile. Following General Jose de san Martin's defeat of the Royalist forces and the subsequent liberation of Argentina, european and other Latin American settlers flocked to the region with dreams of rich farm lands and other natural wealth. This map also identifies various cities, towns, rivers and an assortment of additional topographical details. Map is color coded according to political boundaries with elevation rendered by hachure. One of the most attractive American atlas maps of this region to appear in the mid-19th century. Features the vine motif border typical of Mitchell maps from the 1866 - 1882 period. Prepared by S.A. Mitchell for inclusion as plate no. 64 in the 1867 issue of Mitchell's New General Atlas. Dated and copyrighted, 'entered according to Act of Congress in the Year 1867 by S. Augustus Mitchell Jr. in the Clerks Office of the District Court for the eastern District of Pennsylvania.'