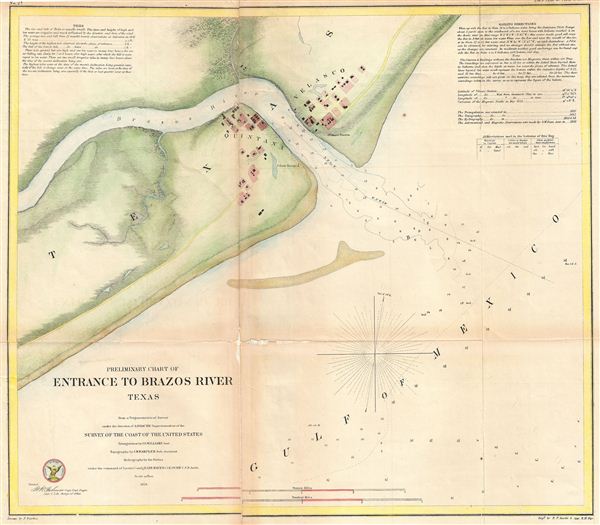 An uncommon example of the 1858 U.S. Coast Survey nautical chart or maritime map of the entrance to the Brazos River, Texas. The map focuses on the Brazos River's outlet into the Gulf of Mexico an includes the Texas towns of Quintana and Velasco, both of which are now incorporated into the city of Freeport, Texas. As a nautical map it further includes countless depth soundings (in feet) and a wealth of practical information for the mariner. The triangulation for this map was completed by J. S. Williams. The topography is the work of J. M Wampler. The hydrography was accomplished by a team under the command of e. J. De Haven and J. K Duer. The whole was compiled under the direction of A. D. Bache, one of the U.S. Coast Survey's most influential and prolific superintendents, for issue in the 1858 annual report to Congress.

Bache, A. D., Report of the Superintendent of the United States Coast Survey, (Washington) 1858.

Good. Some discoloration and loss on original fold lines. Backed with archival tissue for stability.
Looking for a high-resolution scan of this?