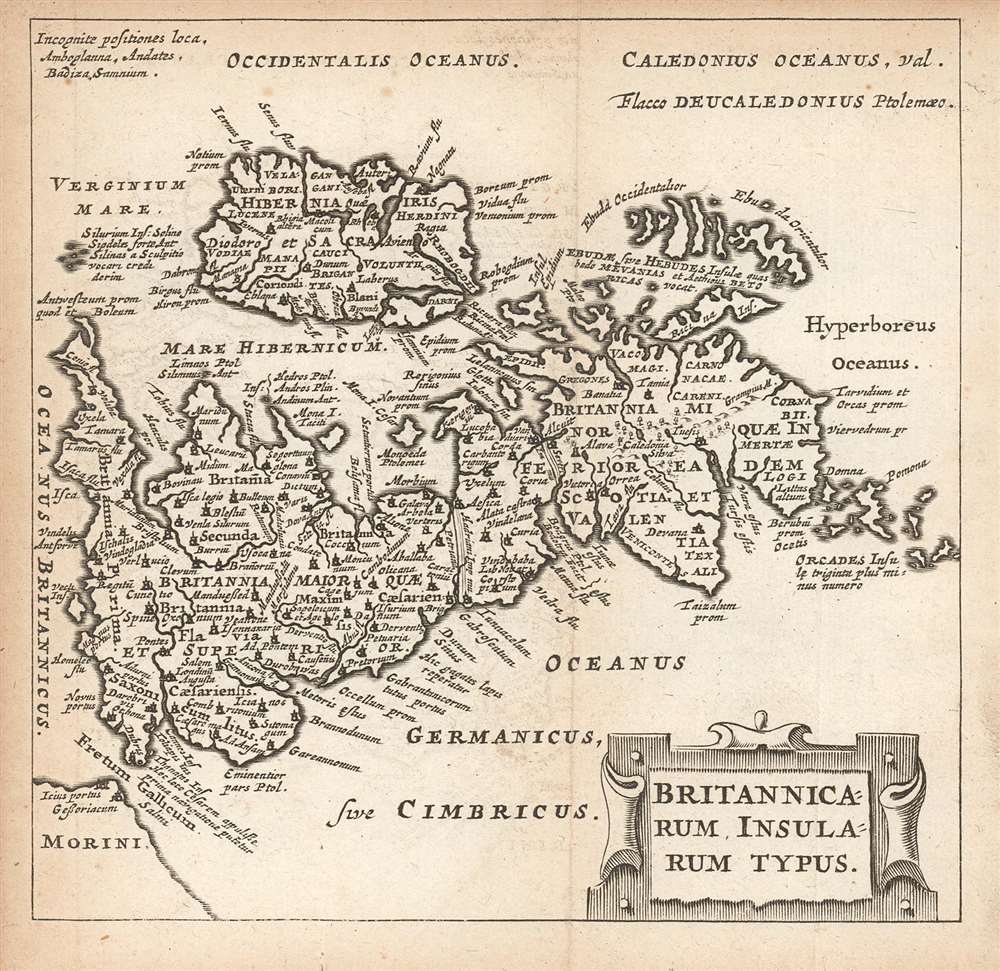 Miniature map of the British Isles under the Roman Empire.
$275.00

This is a finely-engraved miniature map of the British Isles, printed in a 1661 Elzevir edition of Philipp Clüver's Introductionis in Universam Geographiam. This westward-oriented map follows the model of Abraham Ortelius' 1595 map of the same title. As with the Ortelius, this map presents modern geographical information (the outline follows that of Mercator's 1564 and Saxton's 1579 maps) but employs toponomy derived from classical sources, including Pliny, Strabo, and Julius Caesar. It therefore depicts the Britain known to Ancient Rome - Britannia - divided into its Imperial provinces. Celtic tribal names are given as well. The Roman walls built by Hadrian and Antoninus Pius are shown, and historical details, such as Caesar's landing site in his 55 BCE invasion are marked as well. Forests and mountains are indicated pictorially.

The house of Elzevir (active c. 1600 - 1712) were a celebrated family of Dutch booksellers, publishers, and printers of the 17th and early 18th centuries; their specialty tended to be small - format 'duodecimo' books. The firm came to prominence with the work of Lodweijk, or Louis, Elzevir (1546-1617) who got his start as a bookbinder in Leuven and after some years became a bookseller and publisher in is own right in Leiden. Louis published about 150 works during his lifetime. He had seven sons, five of whom carried on their father's trade. Of these, Bonaventura Elzevir (1583–1652) is the most celebrated. He began publishing in 1608, joined in 1626 by his nephew Abraham Elzevir (1592-1652). In 1617 another nephew, Isaac Elzevir (1596–1651), acquired a press allowing the family business to take over the production end of the publishing process. Abraham's son Jean Elzevir (1622-1661) joined the partnership in 1647; he would carry on the Leiden business until his death in 1661. Jean's wife, Eva van Alphen Elzevier (active 1651-1663; died 1681) then became head of the business, producing work of a very high quality. Bonaventura's son Daniel. (1626-80) would join his cousin Louis' press in Amsterdam in 1654, but many of their productions were actually manufactured at Eva's press in Leyden. It is likely that the quality work of this period can be credited to her: it dropped sharply after her death in 1681, at which point the business fell into the hands of her feckless son Abraham, whose incompetence brought the company to an end with his own death in 1712. Learn More...

Very good. Marginal mend at one fold, not impacting image.