1814 Thomson Map of the English Channel 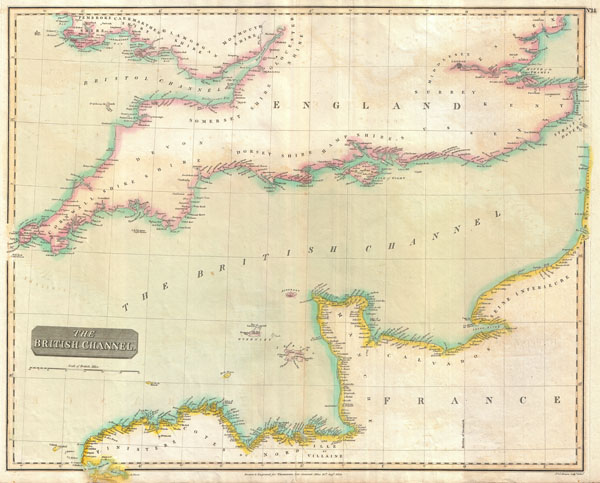 1814 Thomson Map of the English Channel

A fine example of John Thomson's 1814 map of the British or English Channel. Depicts England from Cornwall eastward as far as Canterbury and the Strait of Dover. Extends northward as far as Pembroke Shire and St. Brides Bay. Includes London and the Isle of Wright. On the opposite side of the English Channel this map covers from Goulet Harbor eastward to Boulogne. Minimal inland detail but excellent coastal coverage is offered throughout. During the Napoleonic Wars, which would end at Waterloo just one year after this map was engraved, the English Channel became a major hotbed of smuggling and war profiteering, with English textiles flooding into continental Europe. Thomson maps are known for their stunning color and size, and represent some of the finest cartographic art of the 19th century. Engraved by J. and G. Menzies of Edinburgh for issue as plate no. 15 in the 1817 edition of Thomson's New General Atlas.