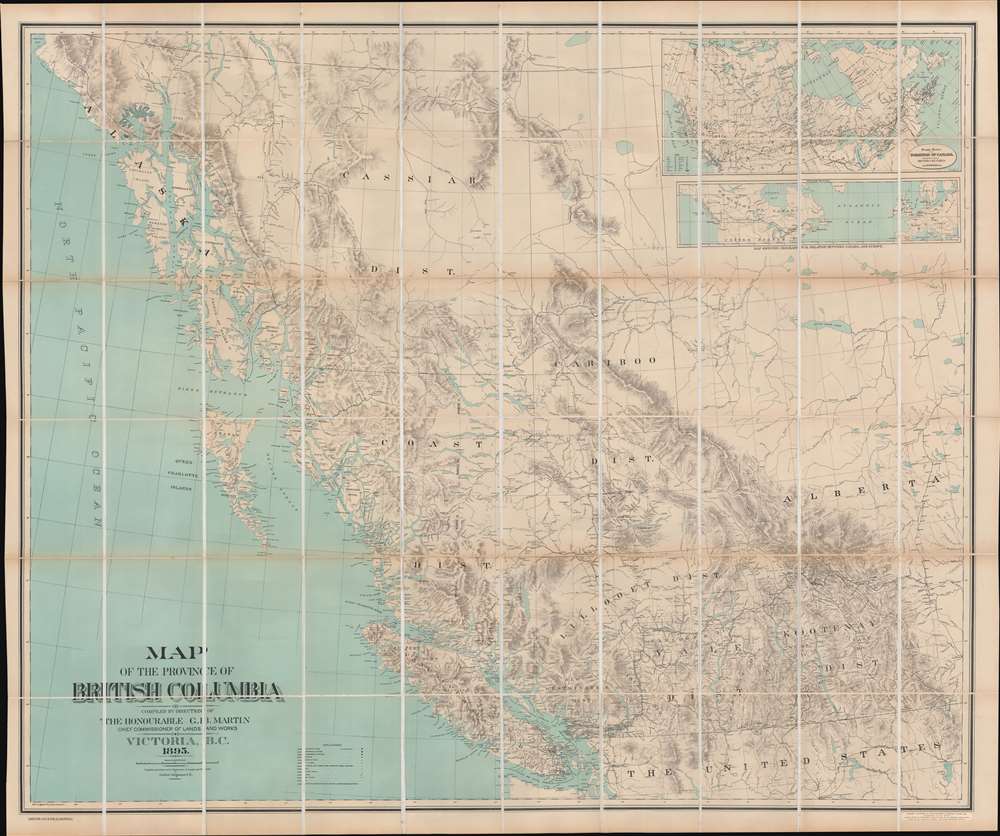 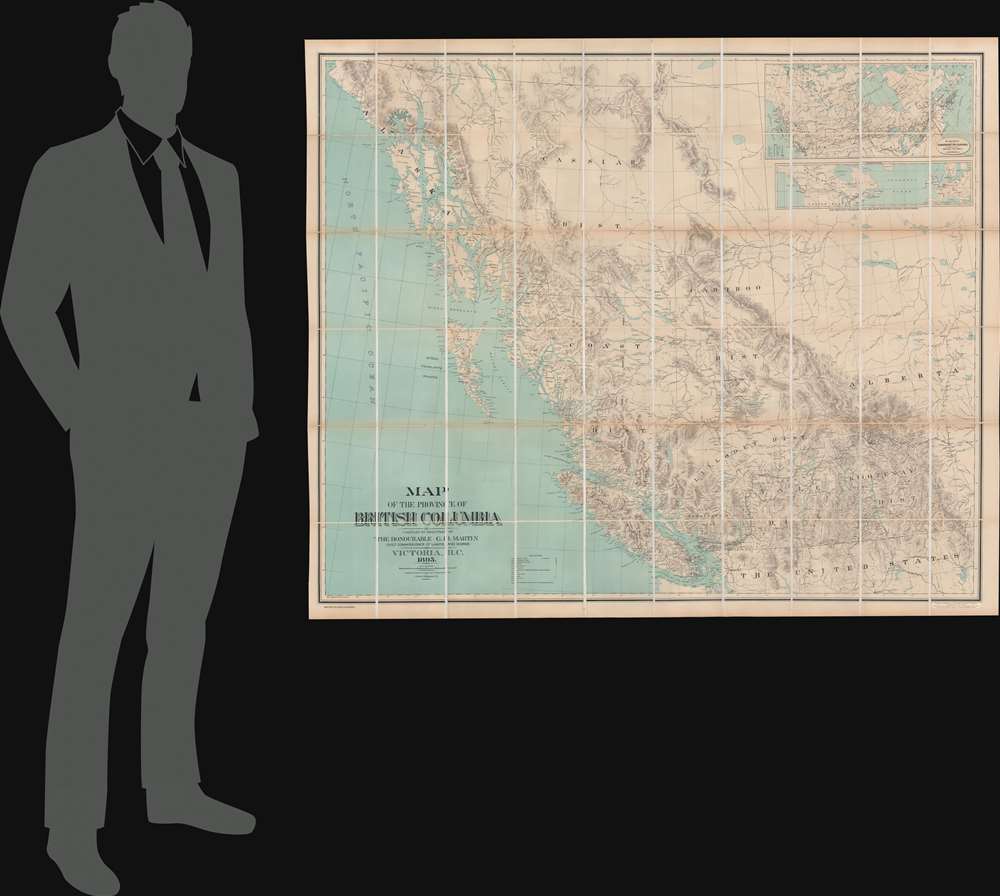 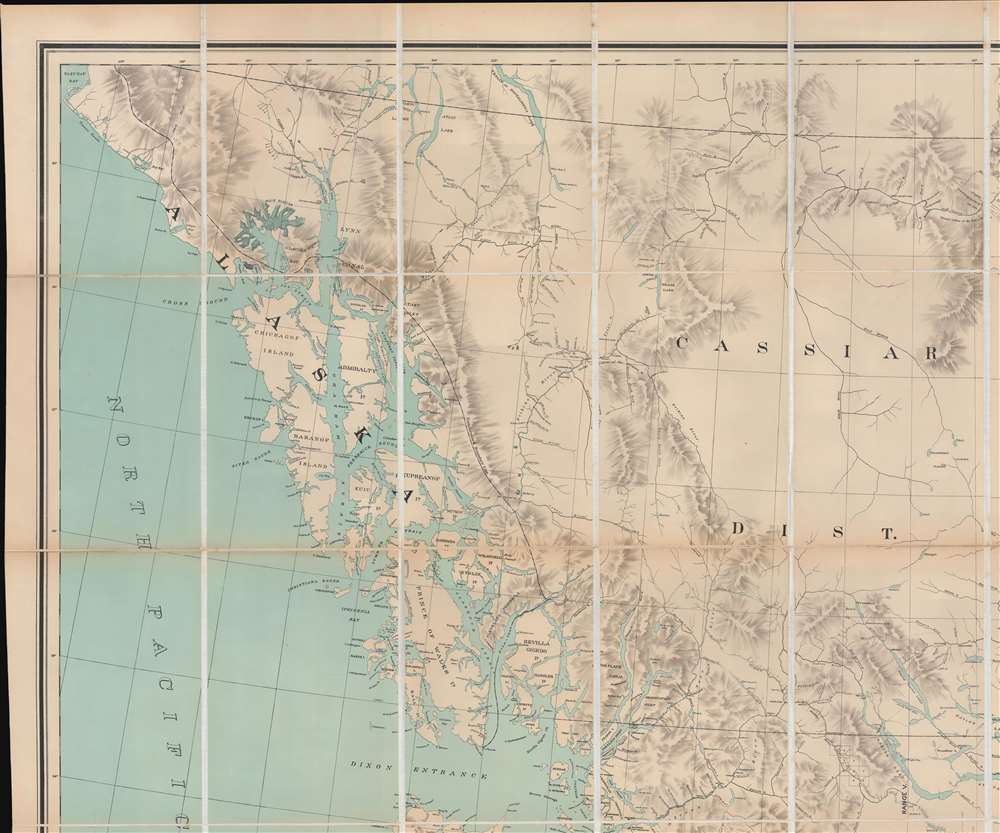 'The most perfect map of British Columbia which has thus far been placed before the Public.' - Kains

This is a broadly expansive map covering British Columbia as well as the surrounding territory. Coverage extends along the Pacific Seaboard from Yakutat Bay to the Strait of Juan de Fuca and inland to Alberta and Fort Mcleod. A key in the lower left identifies local Land Recording Office, Mining Office, Post office, Telegraph lines, American Indian Villages, Mining camps and settlements, Missions, Hudson Bay Company posts, Railroads, Wagon Roads, and other trails. Topography is rendered with shading. The map was produced under the aegis of Thomas Kains' (1850 - 1901), who as Surveyor General of British Columbia, redefined regional mapping. Whereas the grid and plat system worked well to map the flat plains to the east, Kains advocated for a more sophisticated trigonometrical survey for the mountainous British Columba. He sponsored first the James Brownlee map (1893) and as here, the much-improved Jörgensen map. Jörgensen, a Civil Engineer long with the Lands and Works Office, compiled the map from existing and newly commissioned surveys, producing a manuscript base map of some 7 x 5.5 feet.

M. Layland, in his The Land of Heart's Delight: Early Maps and Charts of Vancouver Island, page 132, describes the advances Jörgensen made over the predecessor James Brownlee map (1893),

The Map recorded significant advances over its predecessor - Mohun's Map of 1880 and Brownlee's of 1893 - in geographical knowledge of both BC and Vancouver Island. It showed the finding of the reconnaissance explorations of Mohun, Fray, and Gray in the Sayward and Rupert Districts, and Ralph's detail along the western boundary of the E and N grant. As well as the track of the E and N, it showed the line of the newly opened Victoria and Sidney Railway (nicknamed 'The Cordwood Limited'). Some names in the center of Saanich Peninsula - Garnham, Hea, Slugget, Young, Targoose, and harar - had symbols for post offices, but most are now forgotten. - Layland, M., The land of Heart's Delight: Early Maps and Charts of Vancouver Island, page 132.

This map was compiled by Gotfred Jörgensen under the direction of George B. Martin, then the Chief Commissioner of Lands and Works for British Columbia. It was printed in three color lithographs by the Sabiston Company of Montreal and published in 1895. The map was issued both as a wall map and, as here, dissected and mounted on linen. The present example bears the pastedown of Stanford's Map Establishment, so it is likely that organization that dissected and mounted it. It is extremely rare. We record just two private sales in the last 30 years. Institutionally, we locate examples in the Bancroft Library, University of British Columbia, Vancouver Public Library and the Bibliothèque Nationale de France.

Gotfred Emil Jörgensen (fl. c. .1890 - 1910) was a Danish-American civil engineer active in British Columbia, Canada, and Washington State in the late 19th and early 20h centuries. Jörgensen is elusive, and there is no record of his birth in Denmark or his relocation to the Pacific Northwest. He lived for a time in Seattle, where he appears in the 1891 directory as a Civil Engineer, but most of his work was done for the British Columbia Department of Lands and Works. In his earliest maps, he appears as a 'draughtsman', by 1891 he is listed as a 'civil engineer', and by 1909 he is the 'Survey General of British Columbia'. It is possible he returned to Denmark in the early 20th century. He is most admired for his large-scale maps of Victoria City and British Columbia. Learn More...


Alexander Sabiston (April 1859 - May 5, 1900) was a Montreal based lithographer active in the late 19th century. Sabiston was born in Liverpool, England and spent his early years as a ship's carpenter.. His firm, the Sabistion Lithographic and Publishing Company, was incorporated on 1889. The firm remained active until April 13, 1896, when it went into insolvency. The firm's assets were sold at a public auction on April 28th, 1865, most of which were acquired by one 'George Hyde', who transferred the assets to the managers of the Toronto Lithographing Company. Those gentlemen registered an Appellant Company in Montreal as the 'Montreal Lithographic Company, Ltd'. Meanwhile, in May 1869, Alexander Sabiston and his brother, likely James McLeod Sabiston (1867 - 1948) founded a new firm, the Sabiston Lithographing and Publishing Company. This created a branding conflict with the 'Montreal Lithgoraphic Company', who claimed ownership of the Sabiston name, and filed proceedings against the brothers in December 1896. Learn More...