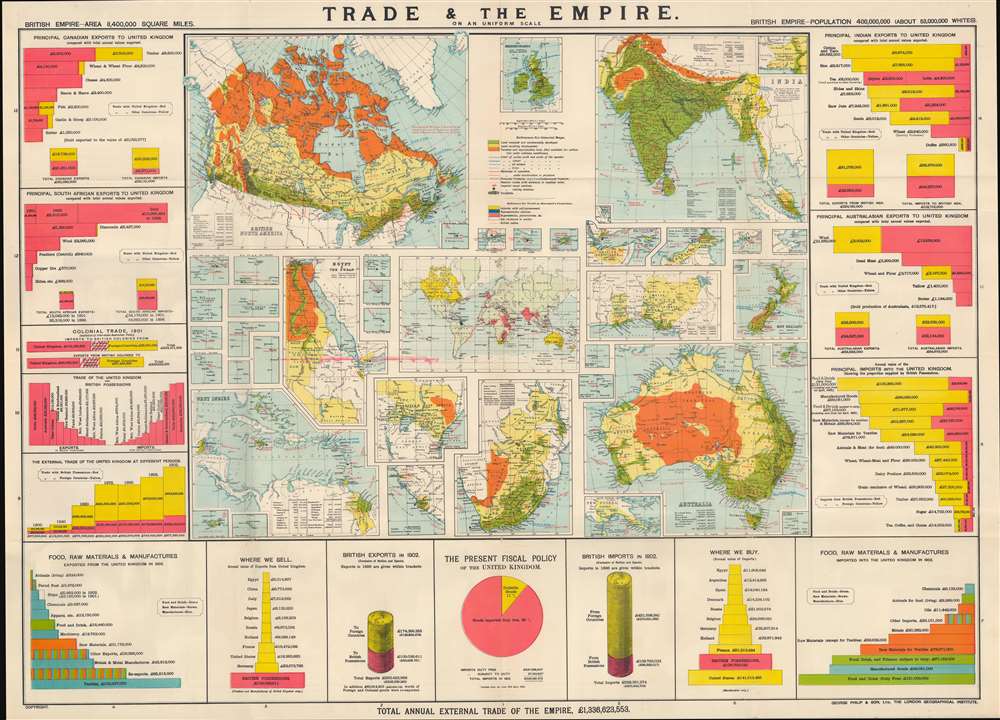 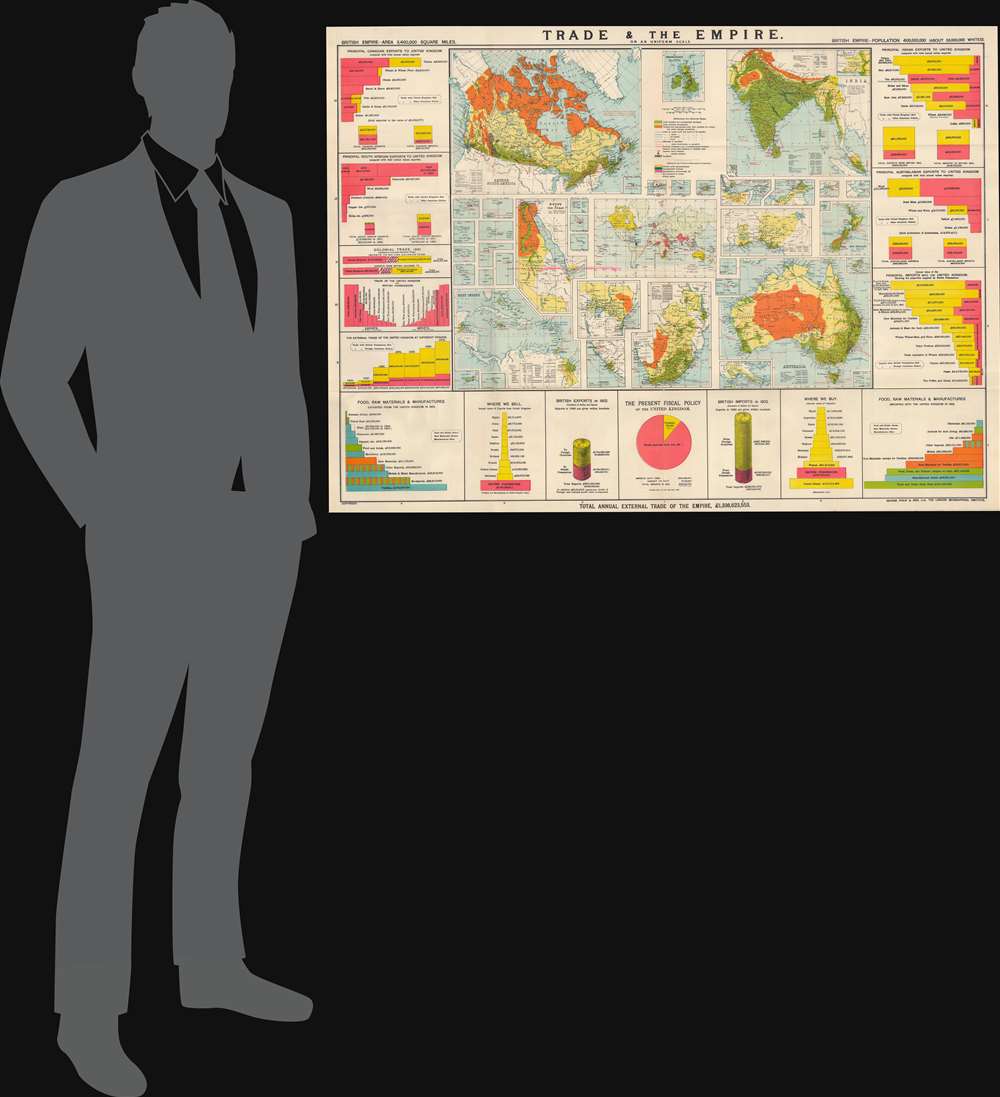 This is a rare c. 1903 George Philip infographic map illustrating trade within the British Empire, with an emphasis on India, Canada, Australia, and South Africa. It is simultaneously a very informative historical source, a piece of imperial propaganda, and a set of maps of the key holdings in the British Empire.

This is less so a map than 56 small maps, charts, and diagrams - all on the same scale. The larger maps have insets, and several small insets stand alone, a reflection of the distributed nature of the Empire. A tremendous amount of information is incorporated, presenting, above all, the functions that different parts of the empire played in the integrated economy. For instance, Australia and Canada were abundant in land, which allowed for the easy production of cheese, meat, wool, timber, and other goods. These products could be used to feed and house the domestic workforce. They also provided raw materials for British manufactured goods, especially textiles. India similarly provided raw materials (cotton, yarn, rice, hides, and jute, for making rope), which allowed for domestic manufacturing.

The importance of raw materials and the inexhaustible demand for them is further emphasized by the mention of 160-acre land grants in Canada for heads of families and males over 18 years of age. The contemporary approach to nature and capital accumulation is indicated by the labeling of land (including much of Canada, Australia, and Africa) that was not already 'commercially developed' or deemed unproductive as 'land awaiting development' (yellow). Contemporary views on race are reflected in the casual mention of the white population of the empire as a proportion of the total.

The Resources of a Global Empire

The resources delivered by the various parts of the empire are indicated. For example, Jamaica provided sugar, rum, bananas, spices, coffee, cocoa, oranges, and logwood. Also highlighted are the land area and population of most colonial possessions, even the tiny Norfolk and Philip Islands (10 square miles, population 750). A map at center shows the telegraph cables that circled the globe, tying the Empire together, and various maps show shipping routes and the distances between Britain and it colonies.

In the aggregate, as a table towards bottom-left shows, Britain's external trade increased significantly over the course of the 19th century, more than sextupling between 1840 and 1875 and exceeding £1.6 billion by 1903, aided by improvements in transportation technology and the reduction of tariffs. At the same time, although this is only shown implicitly, Britain ran a considerable trade deficit and just barely reached a trade surplus within the empire. Thus, the information presented here shows both the legacies of mercantilism and colonialism in the British imperial economy as well as the ways in which Britain had moved beyond that system and embraced free trade, both within and beyond the empire.

The map is accompanied by a binder (into which it folds) that also contains some important information, including charts on imports and exports. These illustrate that, despite the centrality of the Empire to the British economy, Great Britain actually imported more goods by value from the U.S. and nearly as much from France as it did the entire Empire.

This map dates from the height of British imperialism, following the institution of the British Raj in India and the 'Scramble for Africa.' It shows how the British developed a hybrid system of colonization, combining several key areas of cash cropping and raw material production (India, Canada, Australia, South Africa and, to a lesser extent, other territories) with the occupation of key strategic points (Gibraltar, Malta, Aden), which sometimes developed into booming trade entrepôts (Singapore, Hong Kong).

This map was published in London, most likely in 1903, by George Philip and Son in conjunction with the London Geographical Institute, which, despite its name, was a company founded by Philip. We note cataloged examples at the New York Public Library and the Staatsbibliothek zu Berlin. It has no known history on the market.

Very good. Minor wear along original fold lines with verso reinforcement at a few fold intersections. Some bleed-through from binder on one fold. Folds into original paper binder.