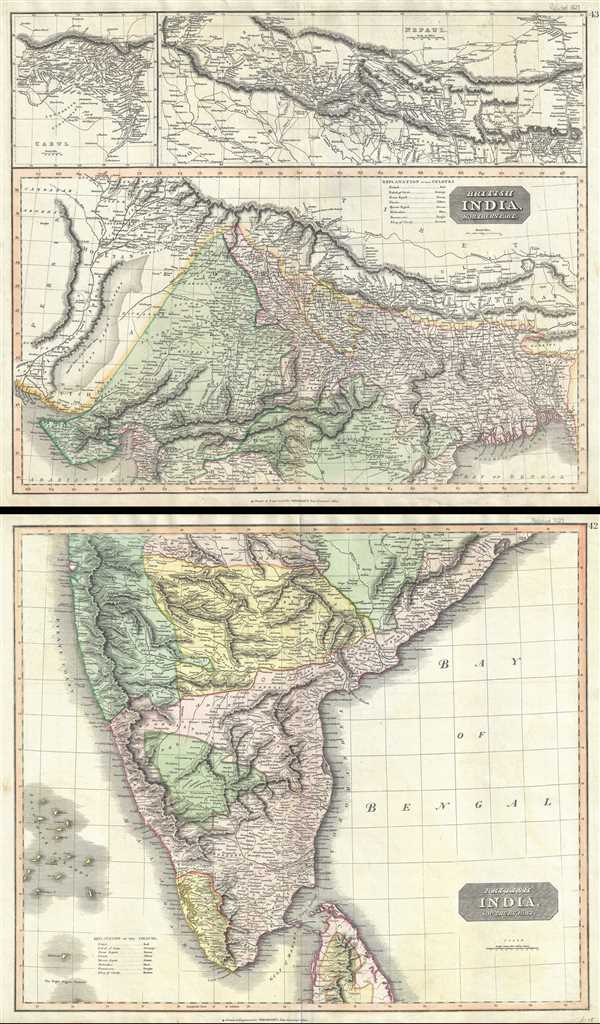 A set of two maps depicting India and Nepal.

This is a fascinating hand colored set of the 1817 maps by Edinburgh cartographer John Thomson depicting India and Nepal. Essentially two separate maps, the first map (image top) depicts northern India and Nepal bounded on the east by Persia and the Indus valley, on the North by Tibet, on the south by Berar, and on the east by Assam and Bhutan. Much of the upper portion of this map includes a detailed inset of the Kingdom of Nepal or Nepaul. This area is depicted in impressive detail considering that, when this map was printed very few western travelers had ever been to Nepal. Includes roads, mountain passes and the residences of important Lamas. Extends fully into the Tibetan plateau as far as Te Shoo Loomboo and the Road to Lhasa (Lassa). The top left quadrant of this map contains an inset of Kabul or Cabul.

The second map (image bottom) covers southern India from Bombay in the North to the northern part of Ceylon or Sir Lanka. On both maps, British controlled areas are red, the territory of Nabob of Oude is orange, the Berar Rajah is green, the regions controlled by the King of Candy are brown, etc. Overall a set spectacularly highly detailed maps of this fascinating region and one of the finest maps of India to appear in the 19th century. Prepared by John Thomson for inclusion in the 1817 edition of Thomson's New General Atlas. Note; The image above represents two separate sheets.