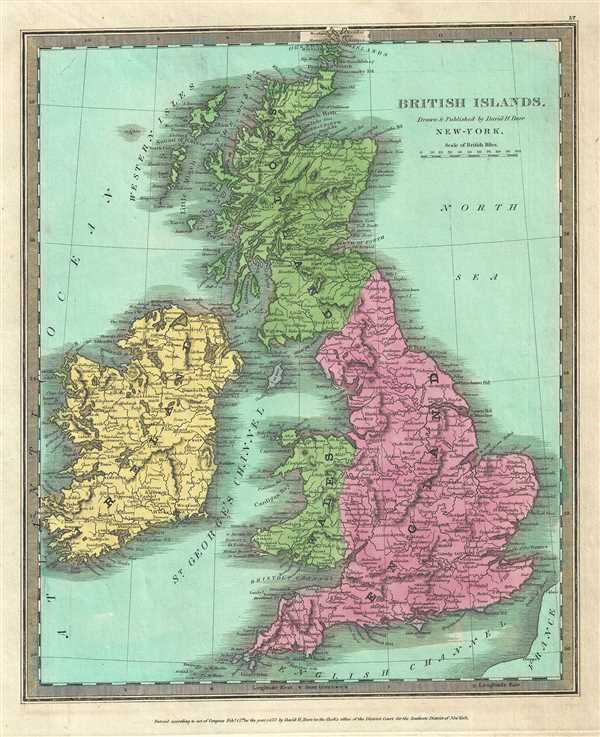 This is a beautiful 1832 first edition map of the British Isles by David Burr. In includes England, Scotland, Wales and Ireland and covers from the southern tip of the Shetland Islands to the Scilly Isles in the south. This map notes towns, rivers, mountains, canals, and various other important topographical details. Elevation throughout is rendered by hachure and political and regional territories are color coded.

During this time in history, the Kingdom of Great Britain and the Kingdom of Ireland had already amalgamated into a single political entity. England and Scotland were in the midst of the Industrial Revolution. Though England and Scotland flourished throughout the 19th century, Ireland suffered a series of famines, the worst being the Great Irish Famine, which lasted from 1845 – 1849 and killed about a million people.
>
According to Ristow, although Burr is credited on the title page, he left this atlas incomplete. He was appointed as topographer to the U.S. Post Office, and of the sixty-three maps finally included in this atlas, only completed eight. The rest of the maps were then completed by Illman and Pilbrow in Burr's style. The map was ‘Entered according to act of Congress Feb 17th in the year 1832 by David H. Burr in the Clerk’s office of the District Court for the Southern District of New York’, but not published until the atlas was released in 1835. Published by D. S. Stone in Burr’s New Universal Atlas.