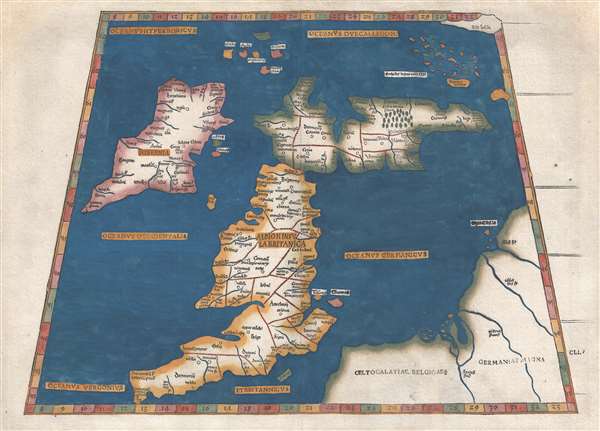 The first 'modern' map of the British Isles to be added to the Ptolemaic 'Geographia.'

One of the earliest obtainable printed maps of the British Isles, this rarity was issued by Martin Waldseemuller's in 1520. It is considered to be the first 'modern' map of the British Isles to be added to the Ptolemaic Geographia. Drawn within Ptolemaic trapezium, the map covers all of England, Ireland, Scotland, and Wales with parts of adjacent France. There is much of geographical interest, including the unusual elongated south-west and eastward orientation of Scotland. Ireland is situated too far north. There are scales of latitude and longitude for a trapezoid projection on the borders; graduated and labelled in degrees.

This map was first published in 1513 to accompany Waldseemüller's translation of Claudius Ptolemy's Geographia, titled Geographiae Opus Novissima. The work not only translated Ptolemy's Greek text, supplying the traditional Ptolemaic maps, but also expanded the coverage with several new 'modern' maps based upon manuscript portolan charts, including the present offering. Despite errors, such as the orientation of Scotland, Waldseemüller's map proved influential and was copied bother numerous subsequent cartographers.

The present map exists in two editions. The first edition, published in 1513, features a title above the top border, Tabula Prima Europae. The second edition, as here, lacks the title as well as printing on the seas. Furthermore, Germaniae Magna has been amended from Germaniae Magnae Pars and Oceanus Duecalledon has been changed from Oceanus Duecalledonius. This, the second edition, as offered here, is considered the rarer. It was subsequently copied with minor updates in a reduced 1522 format by Lorenz Fries.