1901 Wood and Ortlepp Map of the Northern Transvaal 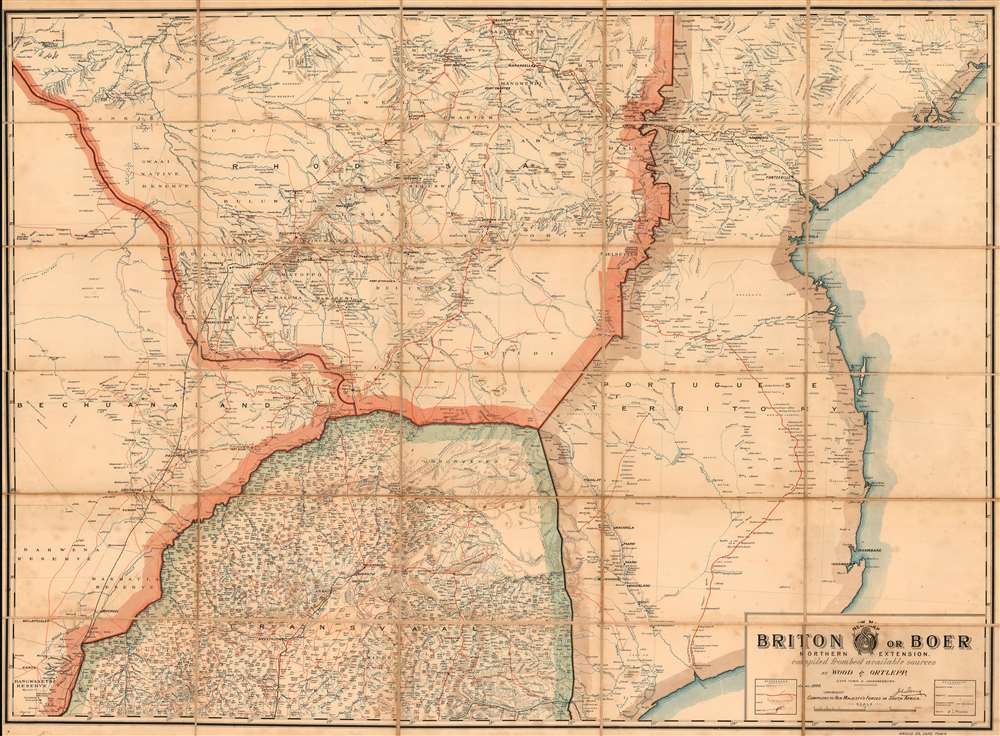 1901 Wood and Ortlepp Map of the Northern Transvaal

Describing the Northern Theatre of the Second Boer War
$1,200.00

This is Wood and Ortlepp's 1900 map of Northern South Africa, southern Zimbabwe, Mozambique and Botswana, called 'New Map: Briton or Boer. Northern Extension.' The map shows the northern theatre of the Second Boer War, and was produced while the conflict was under way. The map focuses on the Northern Transvaal southern Rhodesia, Bechuanaland and the Portuguese Territory: what is now northern South Africa, southern Zimbabwe and Mozambique, and Botswana. Though the war's few set battles took place south of Pretoria, this was Boer territory during the later stages of the conflict. Pietersburg, for example, would not be occupied by the British until April of 1901. The superabundance of Boer place names throughout the Transvaal portion of the map, and the paucity of railways and telegraph lines, attest to the extent to which this was 'enemy territory' for the British.

Throughout, this four-color map is sharply detailed and data-rich. Topographical features are shown in brown, waterways in blue, and roads in red; black is used for place names and other features. Two keys show references for rivers, roads, hills and 'drifts' (a drift is a ford across a river or stream.) Further references show markings for telegraph lines, railways (both complete and under construction) and 'reefs,' (veins of mineral or ore).

Compilers to Her Majesty's Forces in South Africa.

In 1899, Wood and Ortlepp had been selected by the British Field intelligence Department to produce a new, up-to-date 'Imperial Map of South Africa.' Although the firm was not permitted to publish that map until the close of the war, they were eager to make use of as much of their data as they could, as well as the Royal imprimatur implied by their selection. In addition to their 31-sheet official map, they produced in the beginning of 1900 the first of a series of 'Briton or Boer' maps intended to encompass the entire theatre of war. The first and most common of these focused specifically on the Boer Republics, but was followed with maps of the Cape region, the Northwest Cape Colony, the Southeast, and this present Northern Transvaal map. These maps were intended to be contiguous, were produced all to the same scale, and taken together were boasted to be 'the most Authentic Map of South Africa ever published.'

The map is rare. Perhaps ten are catalogued in institutional collections. The present example is the only we are aware to have come onto the private market.

Wood and Ortlepp (FL. 1898-1904) were a surveying and mapmaking firm based in Cape Town, who specialized in regional maps of South Africa. In 1899 they formed an agreement to produce on behalf of the Field intelligence Department in Cape Town a detailed mapping of the Transvaal and Orange Free State, which was published as the thirty-one sheet ‘Imperial Map of South Africa,’ whose first edition was printed between January and April of 1900. Learn More...