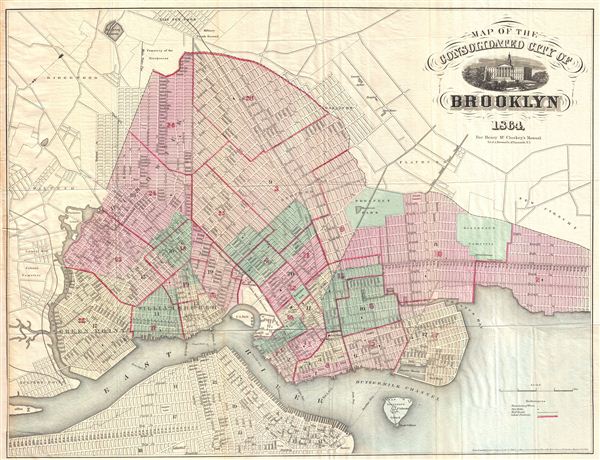 An extremely example of Henry McCloskey's 1864 pocket map of the city of Brooklyn, New York. In the mid-19th century, fueled by the advent of the steam ferry, which made crossing the east River practical, Kings County experienced a massive population burst. Wealthy and poor alike were quick to abandon the dirty and claustrophobic Manhattan for the suburban lands just across the east River. In 1855 the communities of Brooklyn, Greenpoint, Bushwick and Williamsburg were consolidated by the State of New York into one large city, modern day Brooklyn. It was around this time that the term 'Kings County' began to fall out of popular usage in favor of 'Brooklyn.' By 1865, just before this map was printed, Brooklyn had become the third largest city in America, following New York and Philadelphia. Here Brooklyn is revealed in the midst of this incredible development. Prospect Park, which was still being built, is shown, as is Greenwood cemetery. The street layout, mimicking the grid system of Manhattan, is shown in considerable detail. The map additionally attempts to identify important buildings, ferry crossings, bridges, train lines, and 'plank roads.' Also notes public buildings and lands such as the Lunatic Asylum, the Hospital, the Alms House, the Military Parade Grounds, the Marine Hospital and the Navy Yard. Manhattan appears in the lower left hand corner of the map. North is oriented to the lower left. The whole is surrounding by a decorative vine and leave border. This map was drawn by A. Brown of 47 Nassau Street, New York, for inclusion in William G. Bishops 1864 Manual of the City and Corporation of Brooklyn. Cartographically this map references and expands upon the 1846 map of Brooklyn surveyed and prepared by Richard Butt. Of note is the fact that this map, issued just years before Prospect Park's October 1867 completion, and Olmsted's design has yet to emerge.

Henry McCloskey (fl. c. 1863 - 1867) was a journalist working in Brooklyn in the mid 19th century. He was the first regular reporter employed by the Brooklyn Daily Eagle and consequently the first true Brooklyn reporter. When the editor Arnold resigned, McCloskey stepped up to the position became Editor-in-chief. An ardent southern sympathizer and fierce advocate of states' rights, McCloskey had no shame in using the Eagle to express his radical political views. In 1861, following the outbreak of the Civil War, McCloskey published a series of aggressive anti-war editorials. Shortly thereafter, the Eagle, along with several other news papers including the New York News, were accused of disloyalty to the Union and denied access to the U.S. Mail system. The charges were dropped when McCloskey resigned shortly afterwards. McCloskey's true interest was government and in 1863 he was voted city clerk for Brooklyn. He retained this position from 1863 to 1867. Both his predecessor and successor seem to have been William Bishop. One of the duties of the city clerk was to publish an annual report detailing the government, progress, urban planning and development of the city. The resulting Manual bearing the McCloskey name was published during his four years of tenure as City Clerk. The first Brooklyn Manual was published in 1855 following the consolidation of the city. The Manual was published under various names and in various forms until 1888.