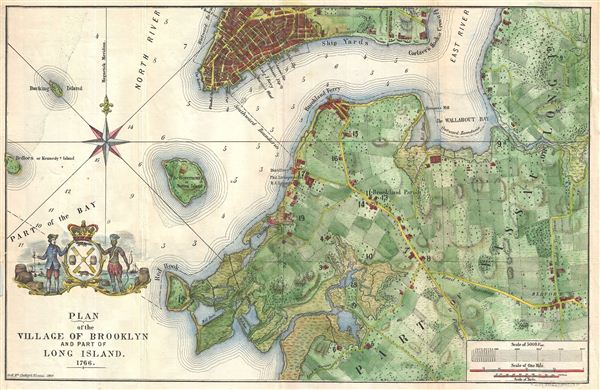 An unusual and appealing 1864 map of Brooklyn, New York, as it appeared in 1766, towards the end of the colonial period. Covers parts of modern day Brooklyn from Red Hook to Bedford and from Williamsburg to Flatbush. The region is shown divided up into land parcels which may represent early long holdings or grants. Various buildings are noted, some numerically, but the map offers no key to more specifically identifying them. Cartographically this map is a reduction of the lower portion of the famous 1766 Ratzer (or Ratzen) plan of New York City. Drawn by A. Brown of 47 Nassau Street, New York, for inclusion in William G. Bishops 1864 Manual of the City and Corporation of Brooklyn.

Haskell, D., Manhattan Maps A Co-operative List, 319-346 (the Ratzer Plan).
Looking for a high-resolution scan of this?