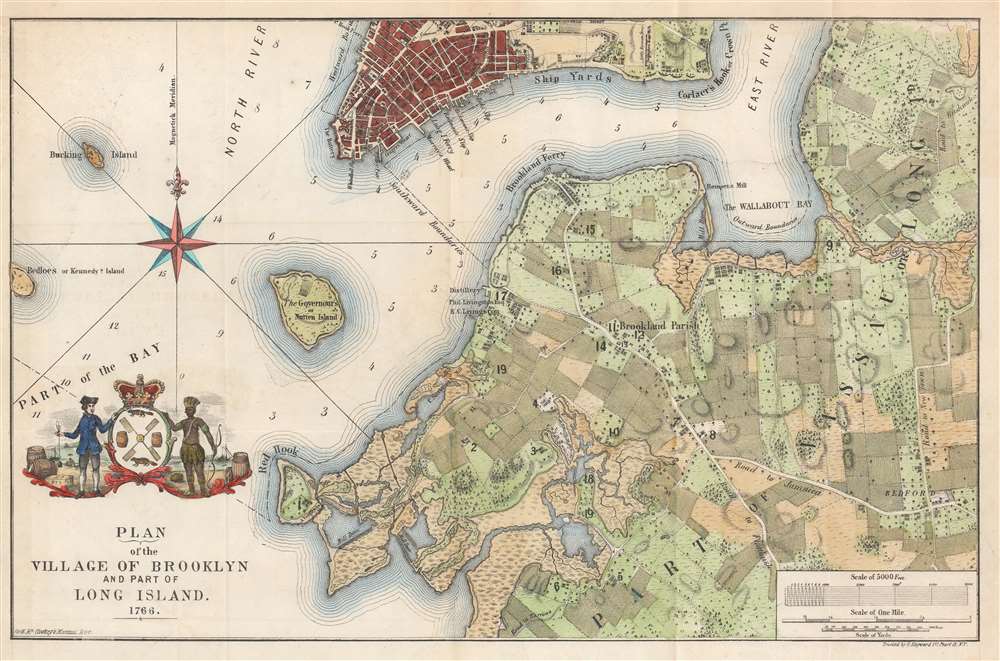 Brooklyn and Manhattan in the lead-up to the Revolutionary War.
$350.00

This is an unusual and appealing 1864 map of Brooklyn, New York, as it appeared in 1766, towards the end of the colonial period. The map depicts parts of modern-day Brooklyn from Red Hook to Bedford and from Williamsburg to Flatbush. The region is divided into land parcels which representing early long holdings. Various buildings are noted, some numerically, but the map offers no key to more specifically identifying them.

The Ratzer or Ratzen Plan of New York City

Cartographically, this map is a reduction of the lower portion of the famous 1766 Ratzer (or Ratzen) plan of New York City. The Ratzer Plan is one of the most important, beautiful, and iconic colonial era maps of New York City. It was surveyed by Bernard Ratzer in 1767. Augustyn and Cohen in Manhattan in Maps comment that

The Ratzer Plan evokes a halcyon period in the history of Manhattan, at least in regard to its physical reality. The city at the time was a small but vibrant place with a population of about twenty-five thousand, for whom the countryside was a short carriage ride away. Also readily at hand were the recreational delights as well as economic advantages of the sea.

This map was drawn by A. Brown of 47 Nassau Street, New York, for inclusion in Henry McCloskey's 1864 Manual of the City and Corporation of Brooklyn. An example of this map is cataloged in OCLC and is part of the institutional collection at Princeton University. An example is also part of the collections at the University of Wisconsin Milwaukee and the Brooklyn Historical Society.