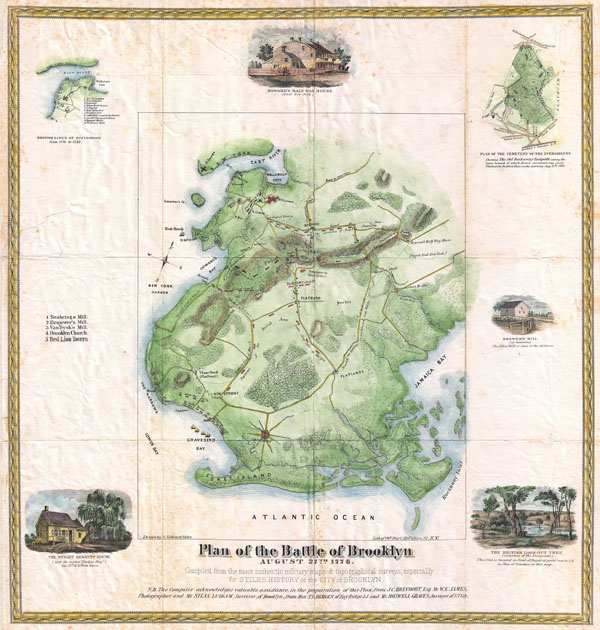 An extremely attractive decorative plan of Brooklyn, New York drawn in 1867 by Samuel Edward Stiles. Designed for Stiles' important History of Brooklyn, this rare map attempted to illustrate August 27th, 1776 Revolutionary War Battle of Brooklyn. This was the first major battle in the American Revolutionary War and predicated the British Capture of New York City. Color coded to show troop movements, forts, and roadways. Surrounded by six decorative vignettes including an inset of the 'British Lanes of Occupation form 1776 to 1783,' Howard's Half Way House, a Plan of the Cemetery of the Evergreens, Brower's Mill ( at Gowanns), the British Lookout Tree in Evergreen Cemetery, and the Wynant Bennet House (23rd Street and Third Ave). Drawn by Edward Stiles and engraved by Charles Hart of 99 Fulton Street, New York.

Samuel Edward Stiles (August 26, 1844 - October 9, 1901) was a 19th century historian and medical doctor based in Brooklyn, NY. As a child Stiles attended Brooklyn Public School No. 11. Graduating from High School, Stiles took work as a dry goods clerk. In 1864 Stiles was recruited by his elder brother, Dr. Henry Stiles, to work as an Assistant Librarian in the Long Island Historical Society. Working here Stiles developed a lifelong love of Brooklyn history. In 1867 he compiled his important multivolume History of Brooklyn." Afterwards Stiles turned his attention to the medical profession in which he became a prominent Brooklyn doctor and ardent supporter of Homeopathic medicine. Stiles died in 1901 and was survived by seven children. Learn More...

Bulletin of the New York Public Library, vol. 4, 1902, Page 85.
Looking for a high-resolution scan of this?