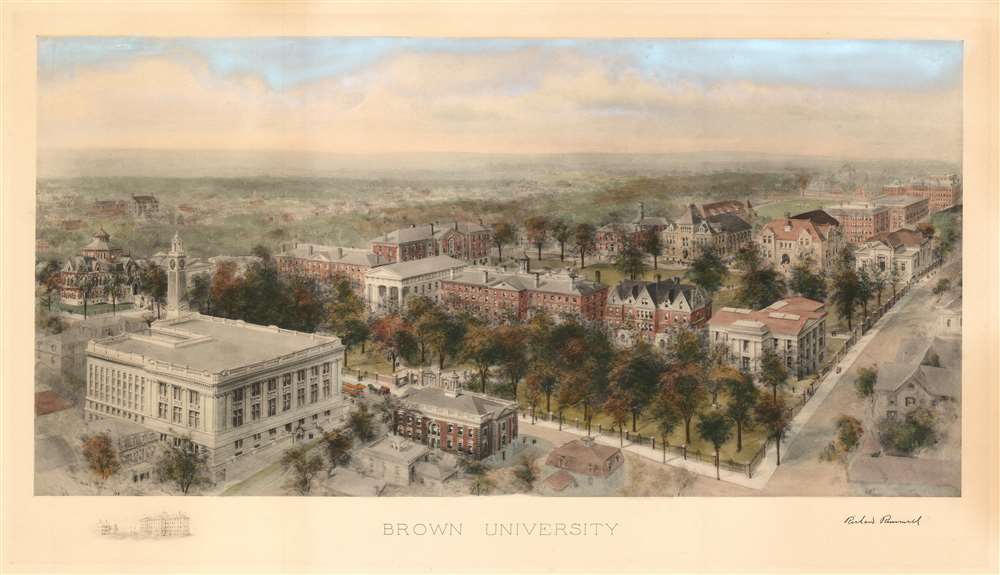 A scarce 1908 signed bird's-eye view of Brown University drawn by Richard Rummell. The view looks on the Brown campus from the southeast corner of the College Front Green. The Van Wickle Gates and University Hall, where the Office of the President is located, appears at center, with the College Main Green just behind. The neoclassical Manning Hall, housing the Haffenreffer Museum of Anthropology, appears just to the left of University Hall. To the right is Slater Hall, a residential building constructed in 1879. The two buildings appearing prominently in the foreground were destroyed to make room for the John Hay Library (1910) and the John D. Rockefeller Library (1964). The Romanesque Sayles Hall (1881) is recognizable in the background, as is the octagonal Robinson Hall (1878). Prospect and George Street intersect at the bottom right.

Rummell was an American landscape artist known for his drawings of American universities. At the turn of the century, Littig and Company commissioned Rummell to prepare watercolors of some of the nation's most prestigious colleges. His first college view was mostly likely Yale, issued in 1906, followed by other prestigious college (Harvard, Brown, Princeton, etc..), then other significant schools. From these watercolors, copper-plates were engraved, and a limited number of engravings were issued. Most of Rummell's university views are strikingly similar in style, reveling the entire campus in panoramic splendor. The views are uniformly issued from an altitude of about 300 feet, suggesting the Rummell most likely worked from a balloon.

This is an original hand-tinted photogravure signed by Richard Rummel (lower right) in 1908. It may have been issued by Littig, like most Rummell prints, but in this case, there is not imprint. In more recent times, Arader Galleries acquired many of the original printing plates for Rummell's college views and issued a mass market restrikes, but the original printings, as here, have become extremely rare. We are aware of only 2 other surviving examples of Rummell's Brown University.

Very good. Even toning.
Looking for a high-resolution scan of this?