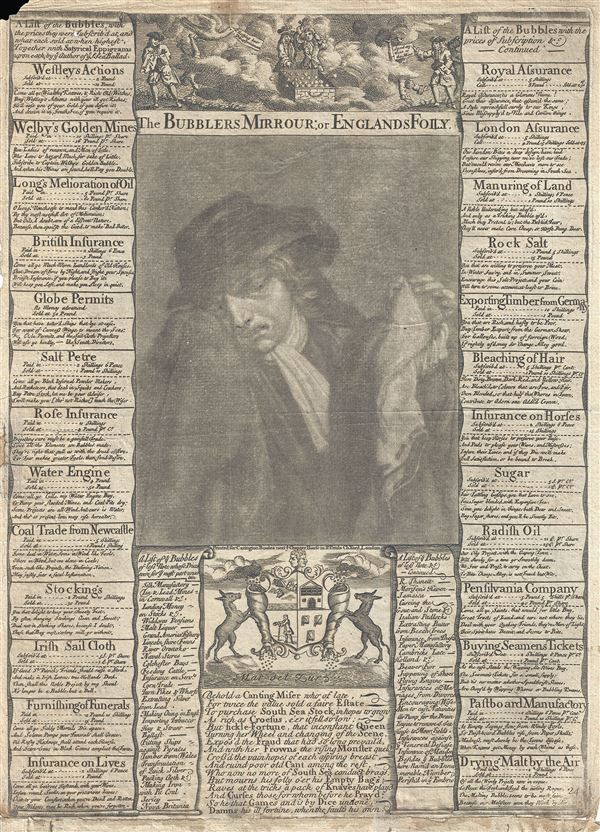 An exceptional 1720 Thomas Bowles broadside satirizing the rise and fall of the South Sea Company. The South Sea Company was an English joint-stock venture dreamed up by John Blunt in 1711. Blunt developed a complicated scheme whereby the South Sea Company would assume government debt in exchange for a monopoly on the presumably lucrative South Sea Trade as well as a number of financial concessions associated with the management of the national deficit. Aggressive propaganda campaigns and skullduggery eventually pushed the stock shares from £100 to a staggering £1000 per share before, in 1720, the entire institution began to collapse, taking with it the entire British economy. This disaster is collectively known as the South Sea Bubble and is considered the world's first bubble economy.

Following the crash of the South Sea Company, in 1720, many Londoners were ruined. Bowles no doubt hoped to capitalize on general interest in bubble economics as well as present his own ideas regarding their folly. Broadsides like this would typically be sold for perusal in bars and coffee shops where patrons would gather around a table to discuss the news represented or laugh (or cry) at the publication's wit. As such, few survive and those that do are typically in poor condition.

The present example features a dramatic early mezzotint of a weeping man deep in mourning whipping tears with his cloak and a handkerchief - certainly a disappointed South Sea investor. The caption reads:

Behold a canting Miser who of late,
For twice the value sold a faire Estate
To purchase South Sea Stock, in hose to grow
As rich as Croesus, e'er it fell so low;
But fickls-Fortune, that inconstant Queen
Turning her Wheel and changing of the Scene,
Expos'd the Fraud that had so long prevailed…

The document is surrounded by a list of some 28 bubbles, identifying both the purchase price and the sale price. Shares of the Pennsylvania Company, for example, rose from £5 5s to £40! Reading through the list, which includes such oddities as 'Bleaching of Hair,' 'Radish Oil,' and 'Manuring of Land,' one might assume the list fictional, but in fact most, if not all, of these were actual joint-stock ventures that rose simultaneously with the behemoth South Sea Company.

An engraving at the top of the broadside illustrates a chest of coin floating away into the clouds. At the bottom, another engraving takes the form of an armorial crest - a mockery of England own royal crest. Here the noble Lion and Unicorn are replaced by asses. These support inverted cornucopias, into which rains wealth from the clouds, and which themselves which discharge into the notably Spanish 'Mar del Zur.'

Bowles' broadside must have proven popular. After Bowles initially printed this in 1720, his successor, Henry Carington Bowles, followed up with a reissue in 1766 - the present example. A third and final edition was issued on woven paper around 1800. The present example is on laid paper with an elaborate crown and crest watermark associated with an unknown papermaker active in London c. 1736.