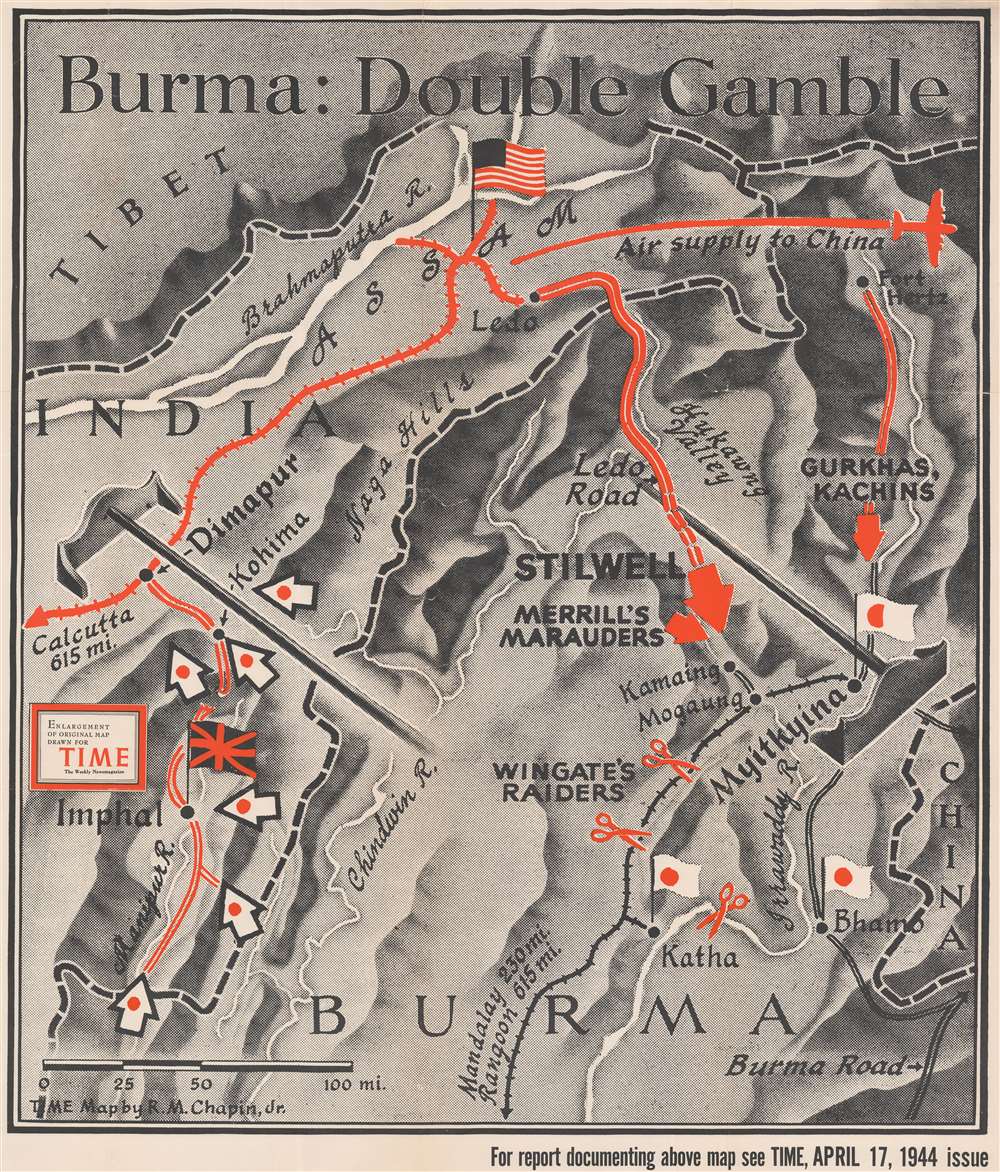 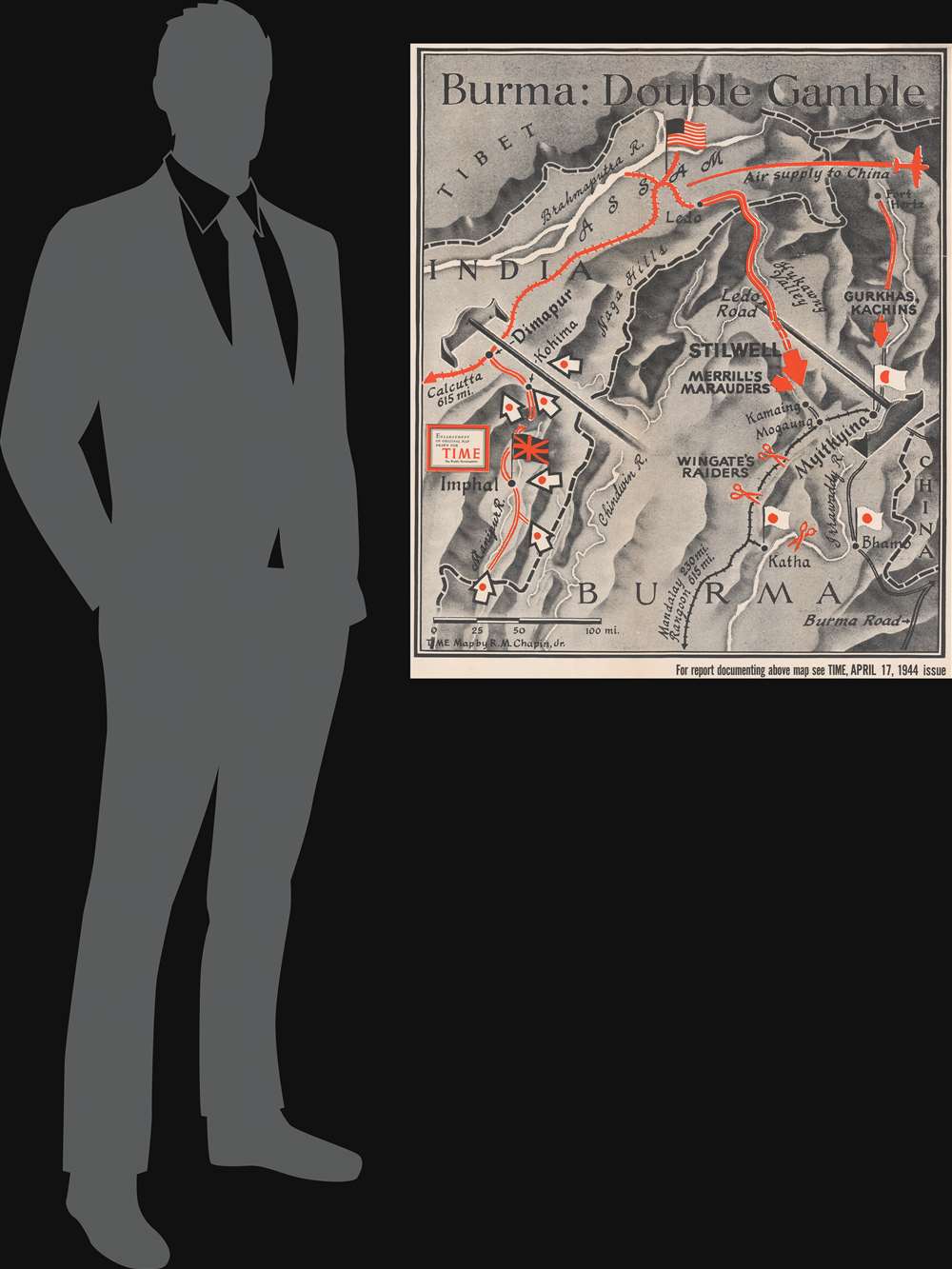 This is a large format separately issued 1944 Robert M. Chapin Jr. map of northeastern India and northern Burma. The map depicts the simultaneous Japanese 'Operation U Go' and the 'Allied Myitkyina Offensive' as they were happening - thus representing the climax of World War II in Burma. Red lines in India mark the railway line connecting Calcutta with Dimapur and the airfields to Dimapur's north. These airfields were the only way for Allied supplies to reach Chiang Kai-shek and the Chinese nationalists, as the Burma Road had been severed in 1942 by a Japanese attack. Dimapur was also the main communication link between Allied commanders in Calcutta and the troops fighting the Myitkyina Offensive. Both these facts made Dimapur a prime target for the Japanese. Parallel red lines into Burma mark the road from Dimapur to Kohima and Imphal, as well as the general direction followed by General Stilwell during the Myitkyina Offensive. Merrill's Marauders, Wingate's Raiders, and the Gurkhas and Kachins, all irregular Allied fighting forces, are referenced as well.

The Japanese Operation U Go, and the Battles of Imphal and Kohima

The Japanese launched Operation U Go on March 6, 1944 with the goal of capturing both Imphal and Kohima in India. Once those two cities had fallen, the Japanese planned to march on Dimapur and sever the railway sending supplies to Chinese nationalists, who the Japanese had been fighting in China since 1937. Hard fighting lasted through March and April, and in May the Allied IV Corps launched a counter-offensive that pushed the Japanese out of the area. By late June, the Japanese were in full retreat, its soldiers suffering from disease and starvation.

General Joseph Stilwell (march 19, 1883 - October 12, 1946) planned the Myitkyina Offensive, an invasion of northern Burma that resulted in the capture of the town of Myitkyina from the Japanese. Launched in April 1944, the offensive slogged through the monsoon season and ended in a costly months-long siege of Myitkyina, which finally fell on August 4, 1944. Stilwell was pleased with this result, but the soldiers under his command paid the price. One unit, the famed Merrill's Marauders, officially known as the 5307th Composite Unit, was so battle fatigued and disease ridden (a particularly virulent outbreak of amoebic dysentery severely hampered the unit's overall health) that the unit's medics continually asked for the whole unit to be relieved and sent to the rear to recuperate. Stilwell continually ignored these requests, and by the end of the siege of Myitkyina, only 130 combat-effective men remained in the 5307th, out of an original complement of 2,997.

This map was originally drawn by Robert M. Chapin Jr. to accompany an article detailing the fighting in India and Burma published in TIME magazine on April 17, 1944. The present example is a separately issued enlargement of the map published in TIME. It also bears a collection stamp from the Ashtabula Public Library in Ohio on verso. We have contacted the library and confirmed that it was legally deaccessioned. Two examples of the present map are cataloged in OCLC, at Franklin and Marshall College and the Osher Map Library at the University of Southern Maine.