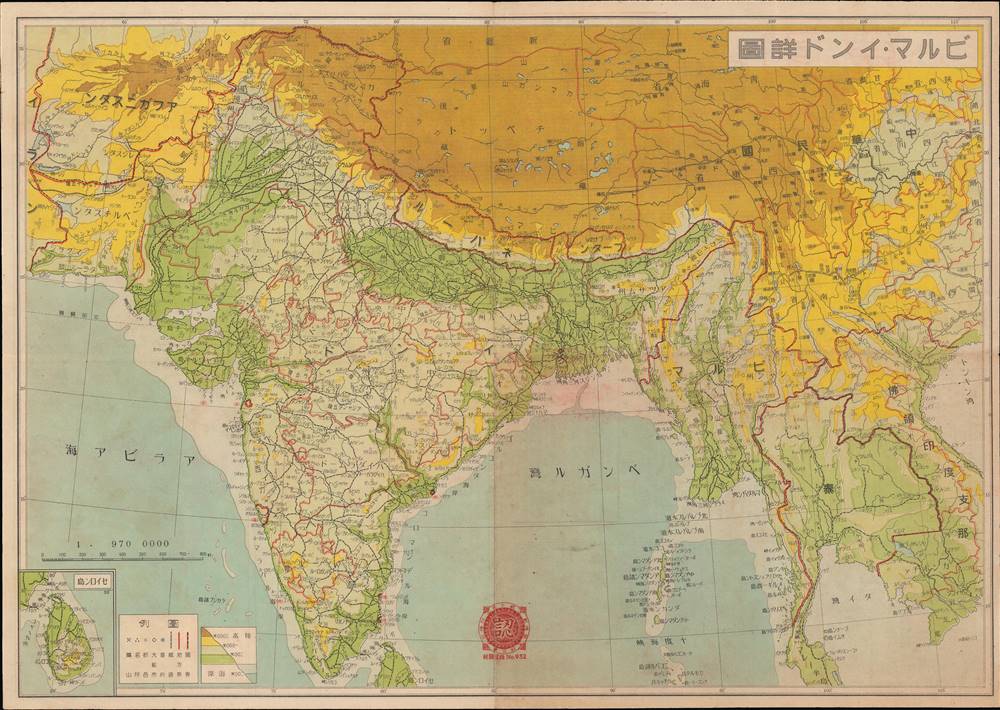 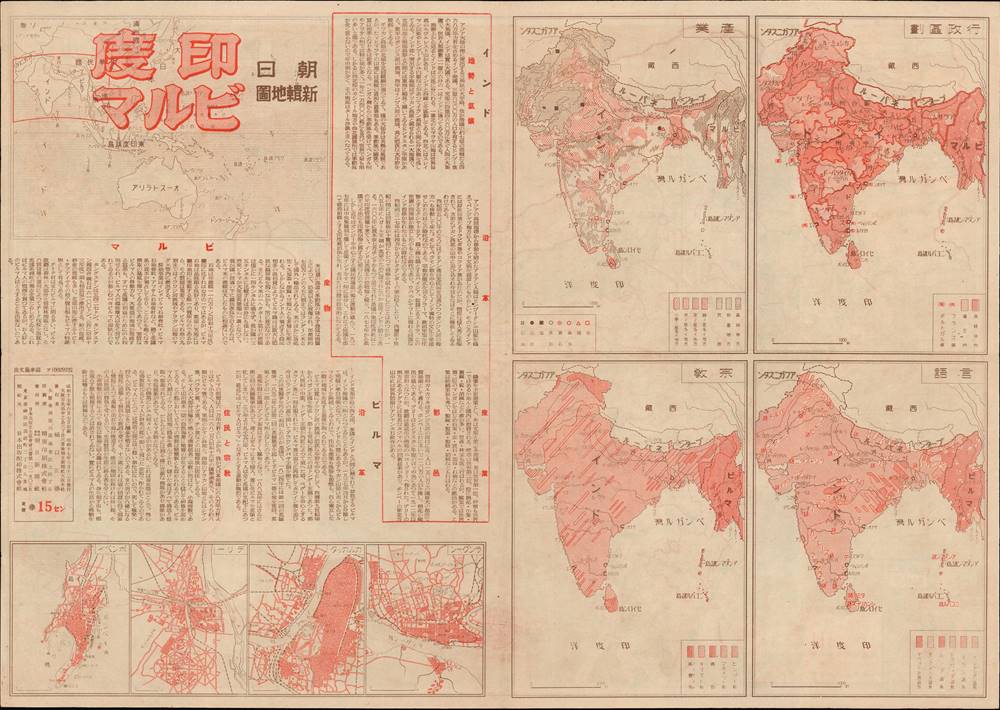 This is a rare 1942 Asahi Shimbun Japanese map of Burma, India, and surrounding territories, made in the context of the Burma Campaign of World War II (1939 - 1945). When this map was published, Japanese forces were advancing northwards in Burma after having rapidly conquered the capital, Rangoon. It was issued to celebrate the victory and promote the war effort on the home front.

The map displays the topography of lands stretching from Baluchistan and Afghanistan in the west to central China and French Indochina in the east. Symbols listed in the legend at bottom-left show political boundaries, railways, cities, famous cultural sites, and the location of mines. An inset serves as a guide to the coloration on the map, reflecting meters above sea level, while another inset map shows the island of Ceylon. The stamp at bottom-center indicates that the map was approved (認) by the Japanese Map Control Co. (日本統制地図株式會社), a censorship outfit disguised as a map publisher.

The verso (back) includes information about and inset maps of Burma and India. The text on the left-half of the page is divided into sections on India and Burma that provide basic information on geography, climate, recent history, political administration, economics, demographics, and culture. At bottom-left are inset maps of (from left to right) Bombay, Delhi, Calcutta, and Rangoon. The maps on the right side of the page display (clockwise from top-left) the resources, political administrations, languages, and distribution of religious beliefs of India and Burma.

Soon after the Pearl Harbor attack and Japanese invasions of Western colonies in Southeast Asia, a small campaign was prepared against British Burma. The Japanese were mainly concerned with cutting off supplies to their Chinese adversaries in Chongqing. They were particularly focused on the railway from Rangoon (Yangon) to Lashio near the Chinese border, where the railway connected with the Burma Road, which had recently been constructed over extremely difficult terrain through the arduous efforts of Chinese soldiers and civilians.

Rangoon fell quickly in March 1942, but the fighting in Burma expanded as Chinese and British (mostly Indian) troops fought the Japanese in Upper Burma. Fighting dense jungles, mountains, disease, starvation, and monsoons as much as the Japanese, the Allies fared poorly in the opening phase of the war. As elsewhere in Southeast Asia, Japan set up a puppet government and trumpeted propaganda of a 'Greater East Asian Co-Prosperity Sphere.' This won some adherents, but a significant Burmese resistance continued throughout the war. Japan also aimed to capitalize on anti-imperialist sentiment in India, creating the Indian National Army (Azad Hind Fauj), composed of captured British Indian troops and Indian independence activists, as well as a provisional government of 'free India.'

The tide see-sawed through 1943 and 1944 on two main fronts, on the Chinese border and near the Indian border. The Japanese launched a daring but ill-advised offensive into Indian territory near Imphal in the spring of 1944, which led to significant losses and a retreat into Burma. Meanwhile, Allied troops (mainly Chinese and British, but also Americans and others) had developed more effective methods for fighting in the climate and terrain, including guerrilla warfare. The Allies launched a successful counter-offensive in late 1944 and negotiated with the armed forces of the Japanese puppet government led by Aung San, convincing them to switch sides in March 1945, a critical blow to the Japanese occupation. The government of Thailand, nominally independent but under Japanese occupation, also began increasing support for resistance movements at this time. The recapture of Rangoon and Lower Burma was delayed in part by prioritizing supplies for China, which was facing an intense Japanese offensive, but was achieved in the spring of 1945 as Japanese forces in Southeast Asia collapsed.

This map was printed on June 7, 1942 (Showa 17) by the Seiban Printing Co. (精版印刷株式會社) and published on June 12 by Higuchi Masanori (樋口正德) of the Asahi Shimbun Press Agency (朝日新聞社). It was distributed by the Japan Publishing Distribution Company (日本出版配給株式會社), a government-run wartime corporation that aggregated scores of private publishers to more easily police their content.

The map is not known to exist in any institutional holdings and is very scarce to the market. Its exact provenance is unclear. Unlike maps which were published as supplements (附錄) to the Asahi Shimbun and other major newspapers and magazines in this period, it appears to be a one-off publication sold separately from any periodical. The censorship stamp on the front lends credibility to this interpretation.


Japan Publishing Distribution Company (日本出版配給株式會社; 1941 - 1949) was a public corporation formed by the wartime consolidation of more than 240 publishing agencies by the Japanese militarist government. The company was preceded and overseen by the Japan Publishing Culture Association (日本出版文化協会), a government effort to better censor and control publications. After the war, the company tried to reestablish itself as a private enterprise, but was closed by the U.S. Occupation authorities in 1949 and split into four companies, (Osakaya 大阪屋, Nihon Shuppan Hanbai 日本出版販売, Japan Textbook 日本教科図書販売, and Tohan 東京出版販売), all of which remain in operation today. Learn More...

Good. Original fold line visible. Discoloration at bottom-center.
Looking for a high-resolution scan of this?