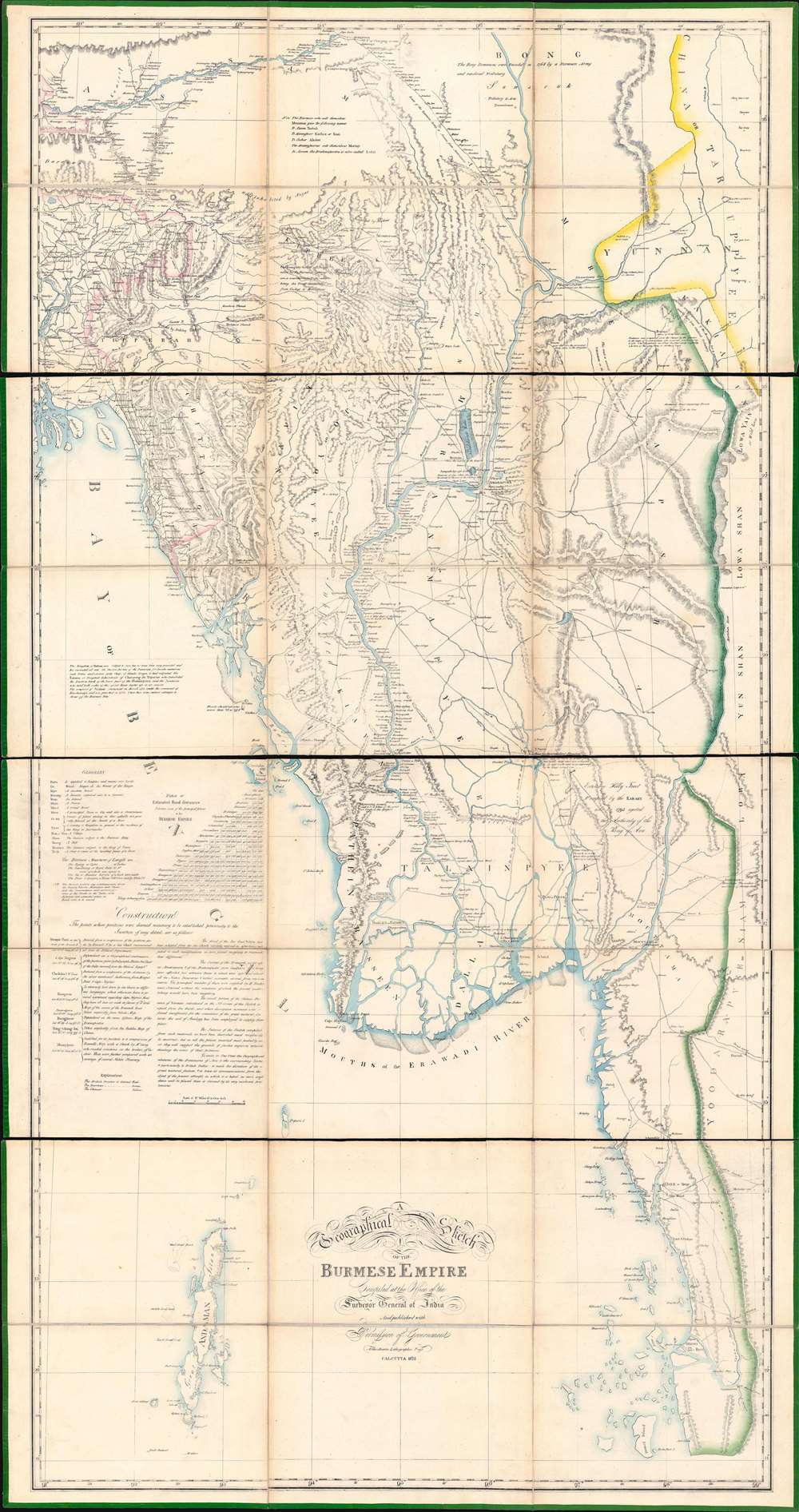 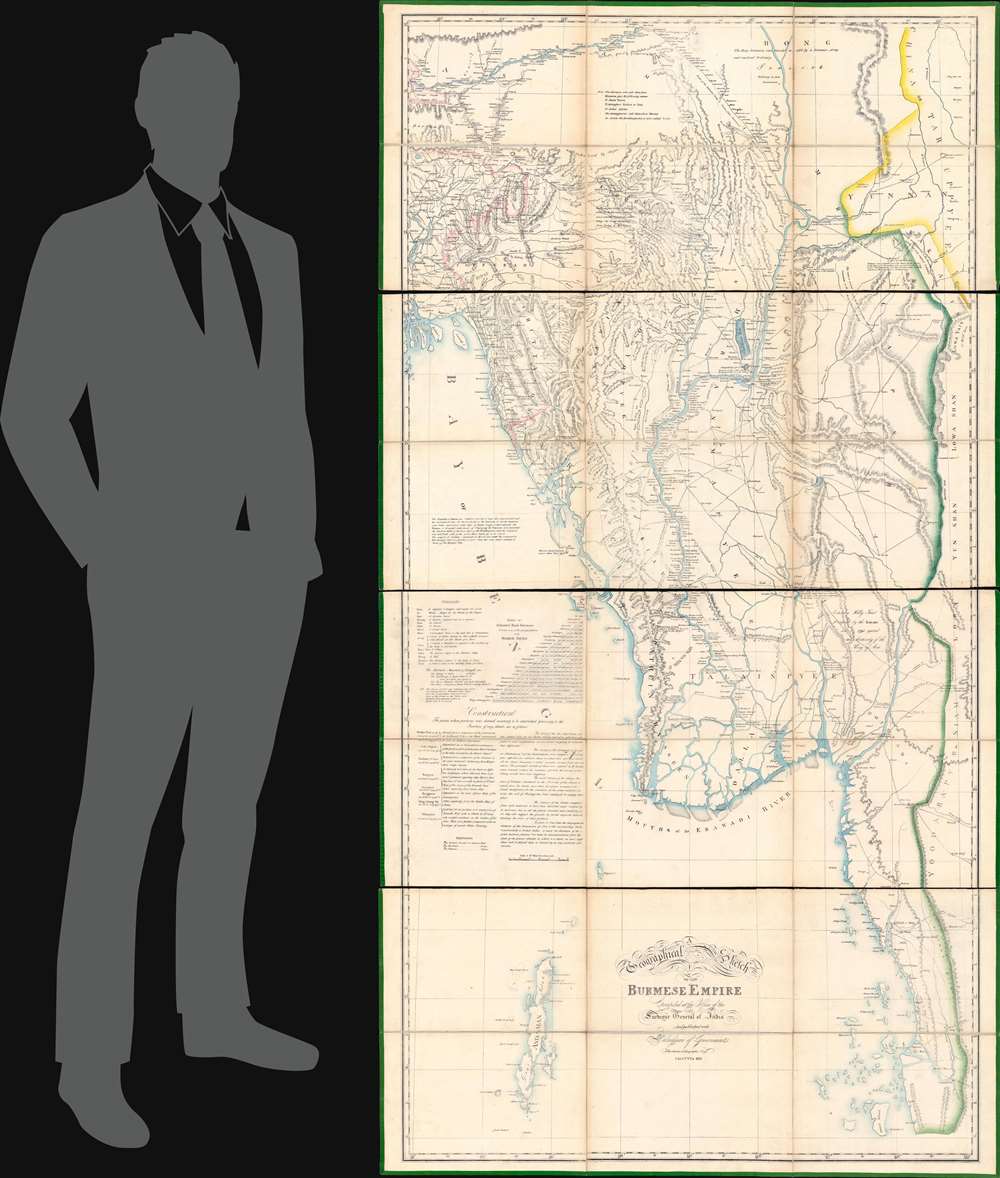 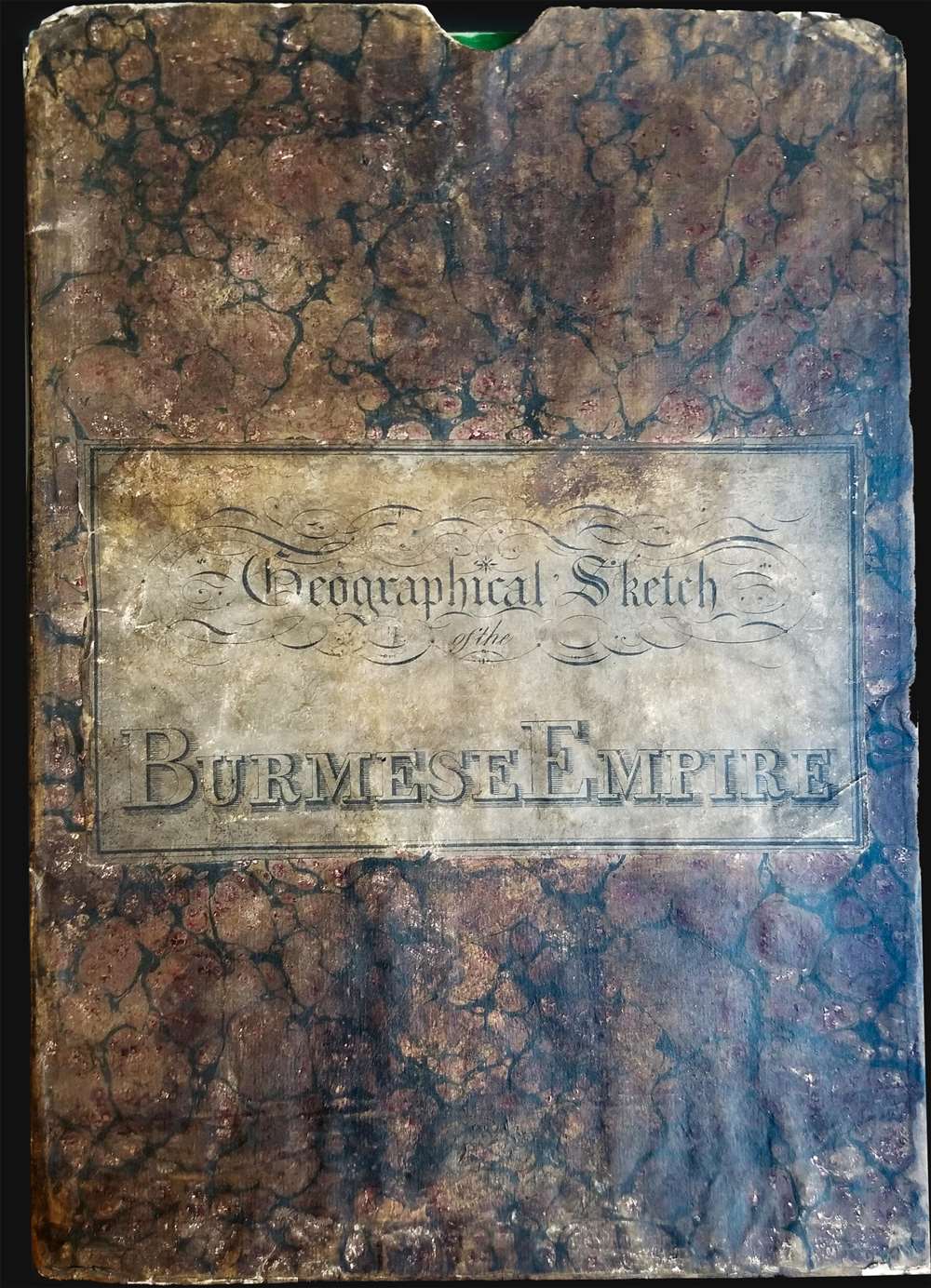 An extraordinary 1825 large-scale map of the Empire of Burma, modern-day Myanmar, issued by the Surveyor-General (QMG) and the private Asiatic Lithographic Press in Calcutta/Kolkata at the height of the First Anglo-Burmese War (1824 - 1826). Issued in four dissected and linen-backed sheets (18.75 x 39.25 in), the map is impressive, measuring nearly 76 inches high and 40 inches wide. Coverage extends from the Brahmaputra River in northern Assam to Domel Island (Letsok-aw Island) and the Mergui Archipelago. Despite its impressive size and apparent density, a close examination actually reveals how little Europeans then knew of the Burmese interior.

The First Anglo-Burmese War was the first of three wars fought between the British East India Company and the Burmese Empire between 1824 and 1885. The conflict grew out of rival expansionist ambitions of British India and the Burmese Konbaung Dynasty under King Bagyidaw Sagaing Min (1784 - 1846). Both powers laid claim to Arakan, Manipur, and Assam, lands located today in northeastern India. Bagyidaw cited the conquest of this region by his grandfather, and was greatly frustrated by cross-border raids of British dependents. The British wanted to expand the Bengal Presidency as a buffer against French influence at the Court of Ava, for the region's rich natural resources, and as a new market for British goods.

Under General Maha Bandula (မဟာဗန္ဓုလ; 1782 - 1825), Burmese forces, hardened by years of battle and familiar with the terrain, expanded rapidly in a series of early victories. At one point, they were within striking distance of Bengal capitals of Chittagong and Calcutta - but rather than advancing, held back to consolidate their position. Choosing not to fight the war in rough unknown terrain, the British took the fight to the Burmese heartland, landing a naval force of over 10,000 men in Yangon (Rangoon), thus taking the Burmese by surprise. From this point forward, although the Burmese maintained numerical superiority, British naval power and modern weaponry proved decisive, pushing the Burmese back in battle after battle.

Ultimately, the British won the war when the Burmese capitulated, signing the February 1826 Treaty of Yandabo. The British gained Assam, Manipur, Rakhine (Arakan), and Taninthayi (Tenasserim) coast south of the Salween River as well as a staggering 1,000,000 Pound Serling indemnity. Two more Anglo-Burmese Wars followed, culminating in nearly 60 years of war. The high cost led to the British East India Company losing its privileges. On the other side, the Anglo-Burmese Wars marked the decline and fall of the Konbaung Dynasty.

Significance of the Map

That parts of this map were replicated by John Crawfurd (1783 - 1868) to illustrate his 1829 Journal of an Embassy From the Governor-General of India to the Court of Ava underscores that even after First Anglo-Burmese War, this remained the best available map of Burma. It was likely used by the Crawfurd Embassy at Ava to work out the specifics relating to the 1826 Treaty of Yandabo, which ended the First Anglo-Burmese War.

The cartographer here has been meticulous in documenting sources - making this map useful for understanding how large-scale colonial maps of largely unsurveyed territories were compiled. The richest content, along the Irrawaddy River, the cartographer derives from first-hand notes (Irrawaddy as far as Ava / Mandalay) and indigenous travel data (north of Ava) collected by the Scottish physician, cartographer, and naturalist Francis Buchanan-Hamilton (1762 - 1829) while accompanying the 1795 Captain Michael Symes embassy to the Burmese court at Ava. For the Chinese borderlands and Yunnan, he relies on 17th century Qing cartography cataloged third-hand by the Jesuit chronicler Jean-Baptiste Du Halde (1674 - 1743). The coasts are loosely mapped from an assortment of British and foreign nautical charts dating to the 16th and 17th centuries. As for the interior, the cartographer duly recognizes,

The Interior of the Sketch compiled from such materials as have been described must necessarily be incorrect; but as all the places inserted most probably exist they will suggest the grounds of further enquiries notwithstanding the errors of their positions.

The cartographer did indeed make errors, but much is correct. He correctly maps the Irrawaddy as far north as modern-day Mandalay (Amarapura / Ava). The map is also replete with historical notes and annotations that presume to offer geographical insight, for example, 'The Bong Dominions were Invaded in 1768 by a Burmese Army', and relative to the events of the First Anglo-Burmese War, the 'Route of the Burmese Army to Assam from Amarapura' - not the 1824 invasion but rather the 1817 invasion under Burmese King Bodawpaya.

By all rights, this map should only have been printed by the Bengal Presidency Government Printing Office (GPO), also based in Calcutta. A similar smaller-scale map was in fact issued in the same year by the GPO, although with less coverage to the south. At the time, the GPO was managed by James Nathaniel Rind (1793 - 1840) and Thomas Black (1806 - 1861), who were also coincidently majority shareholders of the Asiatic Lithographic Company Press (ALP). The ALP operated out of the same offices as the GPO, using some of the same equipment, and sharing other resources. From 1823, Rind and Black funneled government resources and jobs, pirated Government data - likely including this map - to the private ALP. This is not a piracy, as it was 'Published with Permission of the Government' - the government, in this case, being Rind and Black. This scandal eventually blew up in 1829, leading to Black's dismissal, but in 1825, when this map was issued, their grift and embezzlement scheme was going strong.

This map was published in 1825 and printed in Calcutta / Kolkata by the Asiatic Lithographic Company. This map is rare. We have identified an example at Harvard and references to it at the time of publication. The Harvard catalog identifies the maker as 'H. Hamilton' and dates it to 1824 - for no clear reason, as the name/date appears on neither that example nor ours.

Asiatic Lithographic Company Press (1823 - 1860) was a pioneering private lithographic printer based in Calcutta / Kolkata. The press has its origins with the physician James Nathaniel Rind (1793 - 1840), who introduced the first lithographic printing press to India in August 1822. Rind's printing press, although initially intended to be private, was acquired by the British East India Company's Bengal Presidency for its own internal productions. Rind himself, as well as his top lithographer Thomas Black (1806 - 1861), were retained to operate the press. In the same year, the Asiatic Lithographic Company Press was founded at Park Street, Chowringhee, Calcutta, by 'public-spirited Englishmen' under the directorship of George Wood (1800 - 1877), one of Rind's assistants. In a short time, the Asiatic Lithographic Press (ALP) became known for fast high-quality printing and rose to dominate the local market. According to historian Graham Shaw, the ALP 'was the first commercially viable lithographic press in India and the premier lithographic press in Calcutta during the 1820s, producing more works than any other press, and in an impressive variety'. The firm dominated the Indian printing market throughout the 1820s, issuing numerous significant works. Unknown to most, both Rind and Black had an ownership stake in the Asiatic Lithographic Press and were funneling Government Press resources, equipment, and work to the private operation. In 1822, when their scandalous duplicity became known, most of the blame fell on Black, who lost his government position (Rind managed to keep his job, but divested from the ALP). Black immediately took on a senior management position with the ALP, founding annex offices in Serampore and Kanpur (1830). By 1834, he controlled the majority of the ALP's shares. The ALP under Black hired Indian textile workers to colorize prints in exquisite hues, most based on natural Bengali dyes, such as Indigo and cinnabar. Most of the finest and most historically important printed images of India from the 1830s and 1840s were produced by the ALP. Unfortunately, despite the ALP's prodigious output, the Indian climate, unkind to paper, has led to an extreme scarcity of surviving ALP work. The ALP began to decline in the 1850s, as competitors entered the market. Black himself retired a wealthy man, shuttering the operation around 1860. Learn More...


Survey of India (1767 - Present) is India's central engineering agency in charge of mapping and surveying the country. It was founded in 1767 by Major James Rennell, who took the post of first Surveyor General, with the mission to map and consolidate the territories of the British East India Company. The Survey undertook the Great Trigonometrical Survey between 1802 and 1852 in an attempt to accurately measure the Indian Subcontinent - considered one of the greatest feats of mapping of all time. It also sponsored clandestine surveys, at times disguised as Buddhist pilgrims, to infiltrate and map Tibet, then a closed country. With India's independence in 1947, the Survey was folded into the new Indian government, which it remains part of to this day. Learn More...