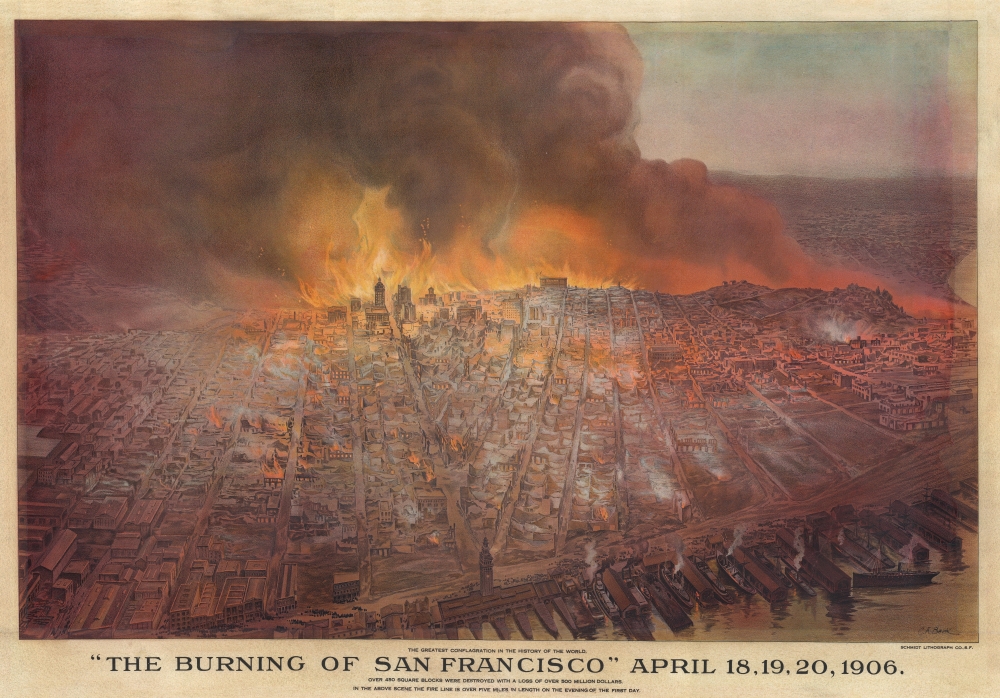 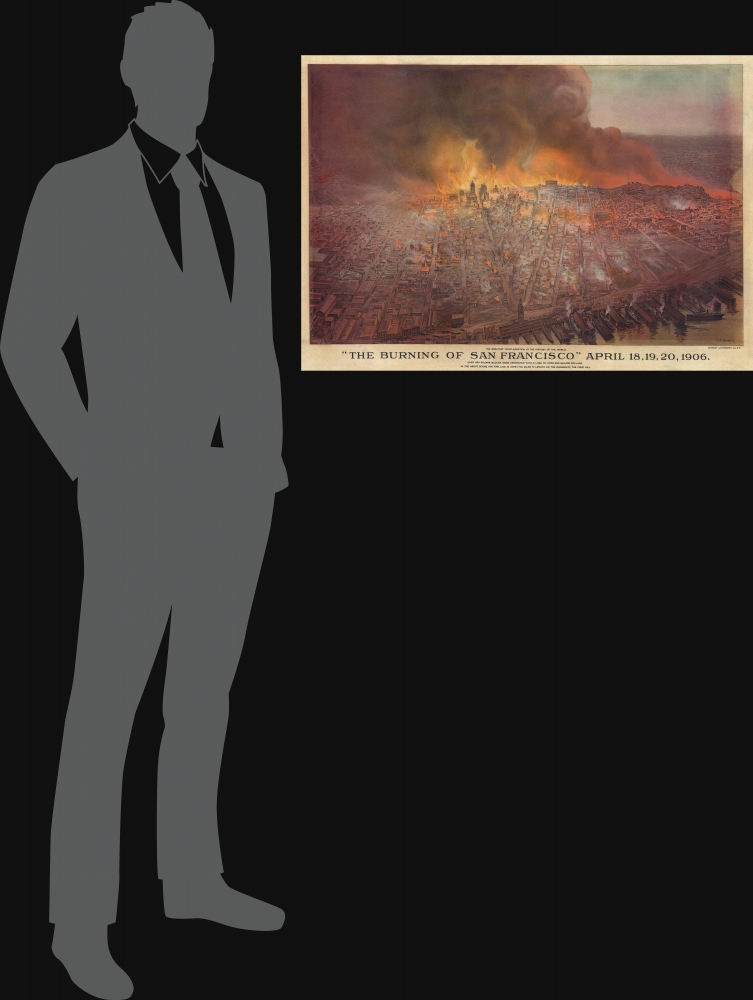 This is a c. 1906 Schmidt Lithograph Company bird's-eye view of San Francisco burning after the 1906 Great San Francisco Earthquake. It is the best and most dramatic contemporaneous illustration of the Great Fire.

In the foreground, the city is in ruins, with very few buildings standing intact. Most are heaping piles of rubble, some of which still burn. Crowds of people appear along the Embarcadero, with the ferry buildings identifiable near the bottom border. The fire line glows orange in the distance, silhouetting downtown San Francisco. The caption states, 'Over 450 square blocks were destroyed with the loss of over 500 million dollars. In the above scene the fire line is over five miles in length on the evening of the first day.'

This view was drawn by C.A. Beck and published by the Schmidt Lithograph Company c. 1906. We note a single cataloged example, at the Bancroft Library at the University of California Berkeley. There may be a second example in the California State Library, but the cataloging is unclear. We note one other instance when this view was offered on the private market.

Max Schmidt (1850 - 1936) was a German American, engraver, lithographer, and publisher. Born in Danzig, Germany, Schmidt left home at fourteen when he chose to go to sea as a cabin boy instead of pursuing a career in medicine, as was family tradition. He spent the next seven years traveling the world and developed his artistic skills aboard ship, keeping a meticulously lettered logbook. He arrived in San Francisco in 1871 and left his ship. First finding work in a restaurant, Schmidt soon began working for San Francisco lithographers, and spent the next three years working for the Korbell brothers, Grafton, T. Brown, and other San Francisco firms and engravers. He set up his own shop in 1874, called Schmidt and Buehler, in partnership with Frederick Buekler. They made pictorial cuts for local newspapers. Schmidt was on his own two years later, working under the name M. Schmidt and Company and producing stock certificates and colored lithographic labels. Schmidt incorporated the firm in 1883 under the name Schmidt Label and Lithographic Company. His factory burned in 1884 and again in 1886. In 1899, Schmidt acquired the lithographic firm Dickman-Jones and H.S. Crocker's label department and formed a new firm called the Mutual Label Company and Lithographic Company. In the early 1900s, Schmidt expanded to Los Angeles, when the Lost Angeles Lithographic Company and the Western Lithograph Company became associated with Mutual. In 1906, the Great San Francisco Earthquake and Fire destroyed his company. He soon rebuilt and named the new firm the Schmidt Lithograph Company. Schmidt continued to find success, and eventually expanded to Southern California, Texas, Utah, the Pacific Northwest, Florida, and Honolulu, making labels for producer and packers in all these areas. Although the firm did produce posters, booklets, and other forms of commercial lithography, it mainly focused on labels. The Stecher - Traung Company bought Schmidt Lithograph in 1966 and formed Stecher - Truang - Schmidt, which operated until 1994. Learn More...