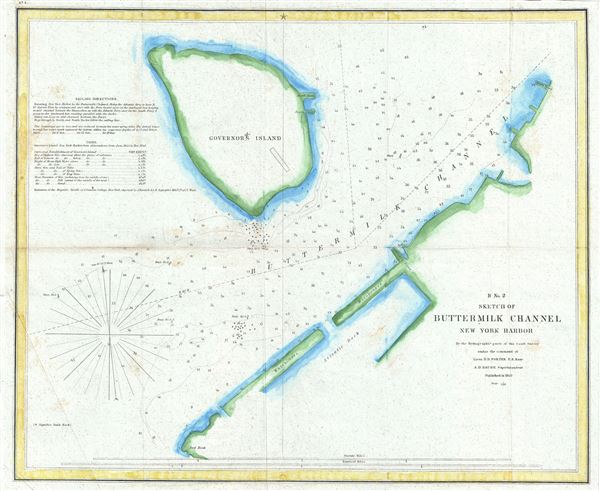 This is an uncommon 1849 U.S. Coast Survey nautical chart or maritime map of the Buttermilk Channel in New York Harbor. Separating Governor's Island from Brooklyn, the Buttermilk Channel is approximately a mile long tidal strait in the upper New York Bay in New York City. This chart covers from Governors Island to Red Hook in Brooklyn, and includes the Atlantic Basin (Atlantic Dock and warehouses), built just two years before this chart was published.

There are many accounts on how the channel got its name. The channel, which is now flows deep, was once shallow and choppy and its waters would foam like buttermilk. Some suggest that dairy farmers delivering milk to Manhattan by boat found their milk churned into butter by the time they got across the turbulent waters. Others believe that before cargo ships, cows were driven across the channel at low tide to graze on Governors Island. Walt Whitman, in his newspaper article about Brooklyn history writes, 'as late as the Revolutionary War (when) cattle were driven across from Brooklyn, over what is now Buttermilk Channel, to Governors Island.'

The chart contains a wealth of practical information for the mariner from oceanic depths, to notes on tides and sailing instructions, positions of buoys, etc. This chart was published by the Hydrographic party of the Coast Survey under the command of Lieutenant D. D. Porter of the U.S. Navy and was compiled under the direction of A. D. Bache, Superintendent of the Survey of the Coast of the United States and one of the most influential American cartographers of the 19th century, and issued in the 1849 edition of the Superintendent's Report.

Bache, A. D., Report of the Superintendent of the United States Coast Survey, (Washington) 1849.