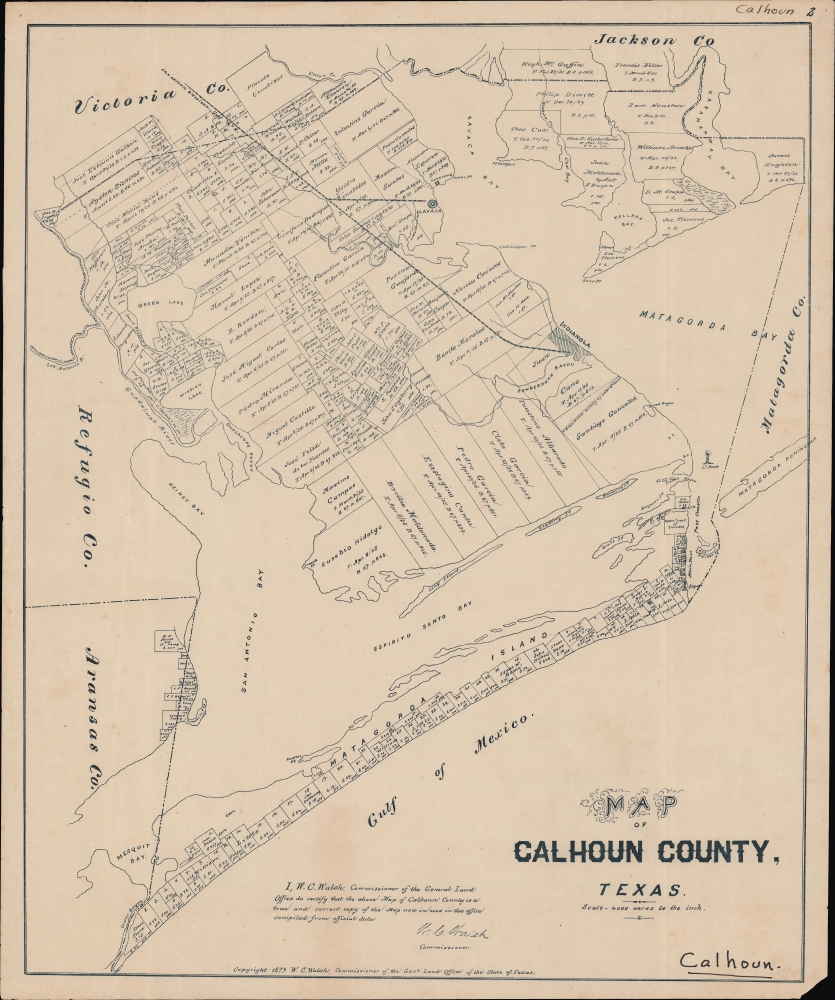 A rare 1879 plat map of Calhoun County Texas produced by the Texas General Land Office. It denotes the various landowners of properties in the county, revealing elements of local history.

The map portrays the cadastral plots of Calhoun County, Texas, on the Gulf of Mexico about half-way down the Texas coast, not far (about 60 miles) from Corpus Christi. The owners of individual plots, including the state, are noted, as are towns and other features such as lighthouses, islands, rivers, and railroads. Of particular interest is a plot of land owned by 'Sam Houston.' It is unclear if this was the same as the famous statesman, as he was deceased by the time this map was published.

This area was historically the province of the Karankawa people and European-descended settlers only arrived in the 1820s. Relations with the Spanish, ensconced at the Presidio-La Bahia some 40 miles away, were contentious. The situation only worsened with the arrival of new settlers in the 1820s, when the Karankawa were forcibly expelled. The small coastal town of Linnville, near top, was the earliest permanent white settlement in the county. In 1840, it had grown to be the second largest port in Texas but was sacked in an 1840 raid by Comanche warriors following the Council House Fight.

The county was established in 1846 from portions of surrounding counties and was named for the firebrand South Carolina senator and champion of slavery. In the county's early years, Indianola emerged as an important port with long-distance connections (and a major regional site for slave auctions), though the city was badly damaged by a tropical storm and a hurricane in 1875 and 1886, respectively. More immigrants arrived in the area directly from Europe (especially France, Germany, and Sweden), but as can be seen here most landowners in the county remained Tejanos or Anglos.

Plots are much smaller on Matagorda Island, most of which was owned by one William Little. Today, the island is protected as a state park and National Wildlife Refuge. During the Civil War, a Confederate fort was built on the island, which nonetheless did not prevent Union gunboats from bombarding Port Lavaca.

The San Antionio and Mexican Gulf Railway serving Lavaca and Indianola is also worth noting. Initiated in 1850 to, as the name suggests, connect San Antonio with the Gulf of Mexico, via Lavaca, the line was destroyed by Confederate forces during the Civil War and then repaired and connected to the Indianola Railroad, the portion shown here.

This map was prepared by the Texas General Land Office in 1879. We note it among the holdings of the University of Houston, the Library of Congress, and Texas A and M University, and it has no known history on the market.

Good. Even toning. Area of loss in bottom-right corner. Some wear and small chipping around the edge.