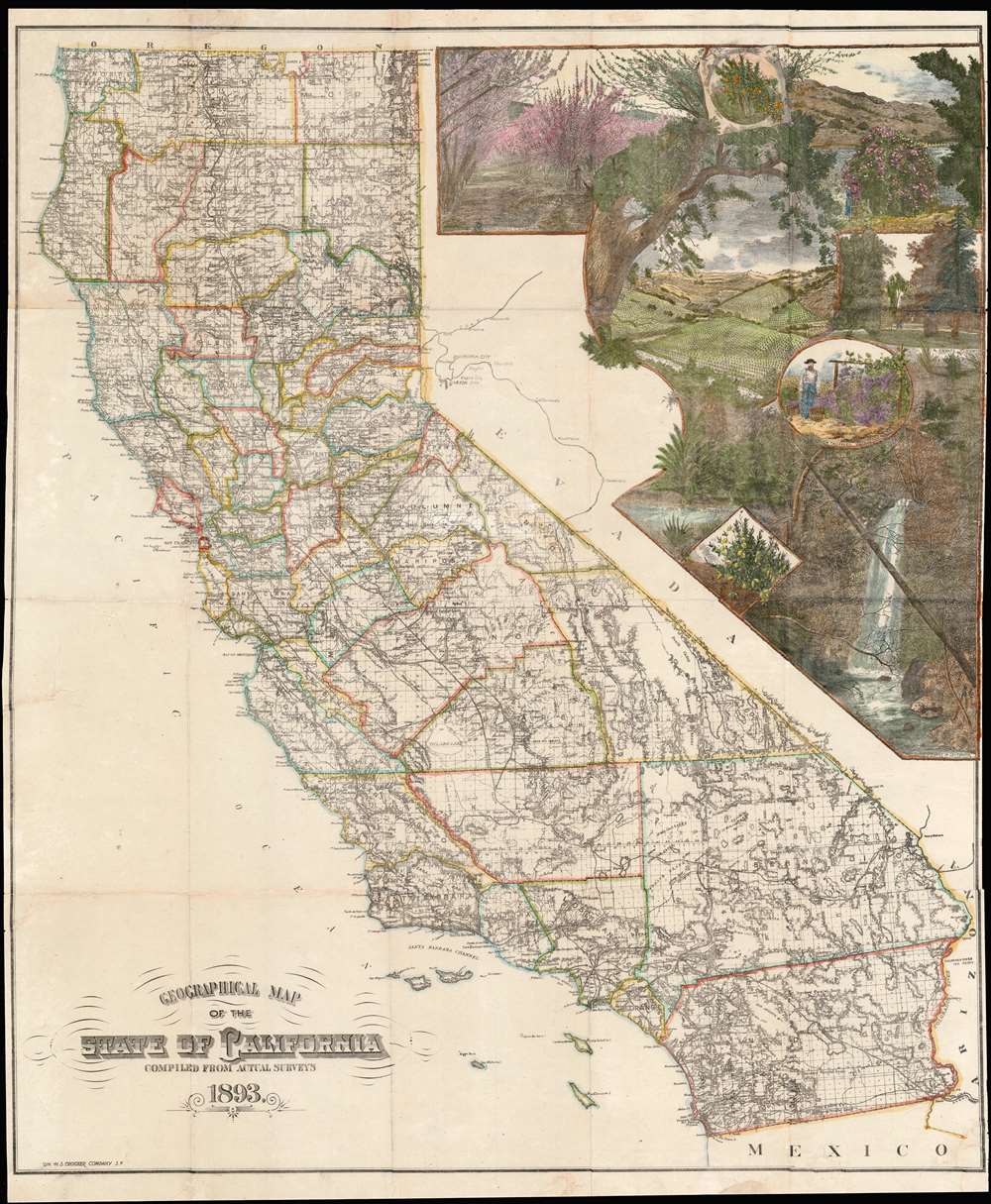 One of the earliest depictions of California Wine Making on a map.
$1,500.00

A stunning separately-issued 1893 decorative map of California issued to promote the Crocker family's business interests in the development and settlement of California. It is one of the earliest cartographic representations of viticulture in California. While the mapmaker Henry Smith Crocker was on the surface a printer, his business interests were inextricably linked to those of this brother, Central Pacific railroad magnate Charles Crocker (1822 - 1888). H. S. Crocker used his publishing and printing empire to propagandize the Central Pacific as well as the general virtues of California as a place to resettle - this map being one such example, probably issued as a booster publication for the California exhibit at the 1893 Chicago Columbian Exposition.

The map is most striking for the large decorative vignette occupying the upper right. The vignette features, front and center, one of the earliest illustrations of California wine making, entitled 'A California Vintage.' It also emphasizes the richness of California's 'fruit district' and the overall natural beauty of the state. The vignette was completed by a previously unknown San Francisco engraver by the name of Barnard, doubtless a line employee in the H.S. Crocker publishing establishment. The whole makes a strong visual argument for the agricultural and life opportunities of the Golden State.

Cartographically the map is based on General Land Office geological surveys up to 1893. The detail throughout is significant, including counties, towns, roads, railroad, mountains, rivers, lakes, mining information, township surveys, and more. Some of the more interesting elements include early detail in and around Virginia City and Carson City.

The map is a separate issue piece, probably published for the California exhibit at the 1893 Chicago Columbian Exposition. Some suggest that there are two issues of this map. That is incorrect. Crocker did issue a similar map of California with a similar and equally striking, if completely different, vignette for the California Board of Trade in 1888 (see our example California-crocker-1888). The present 1893 issue is a completely new engraving prepared for the Columbian Exposition. The map is rare with only 4 verified sales records in the last 20 years. Institutional examples are held at Stanford, the University of California Berkeley, the California Historical Society, and three other institutions.