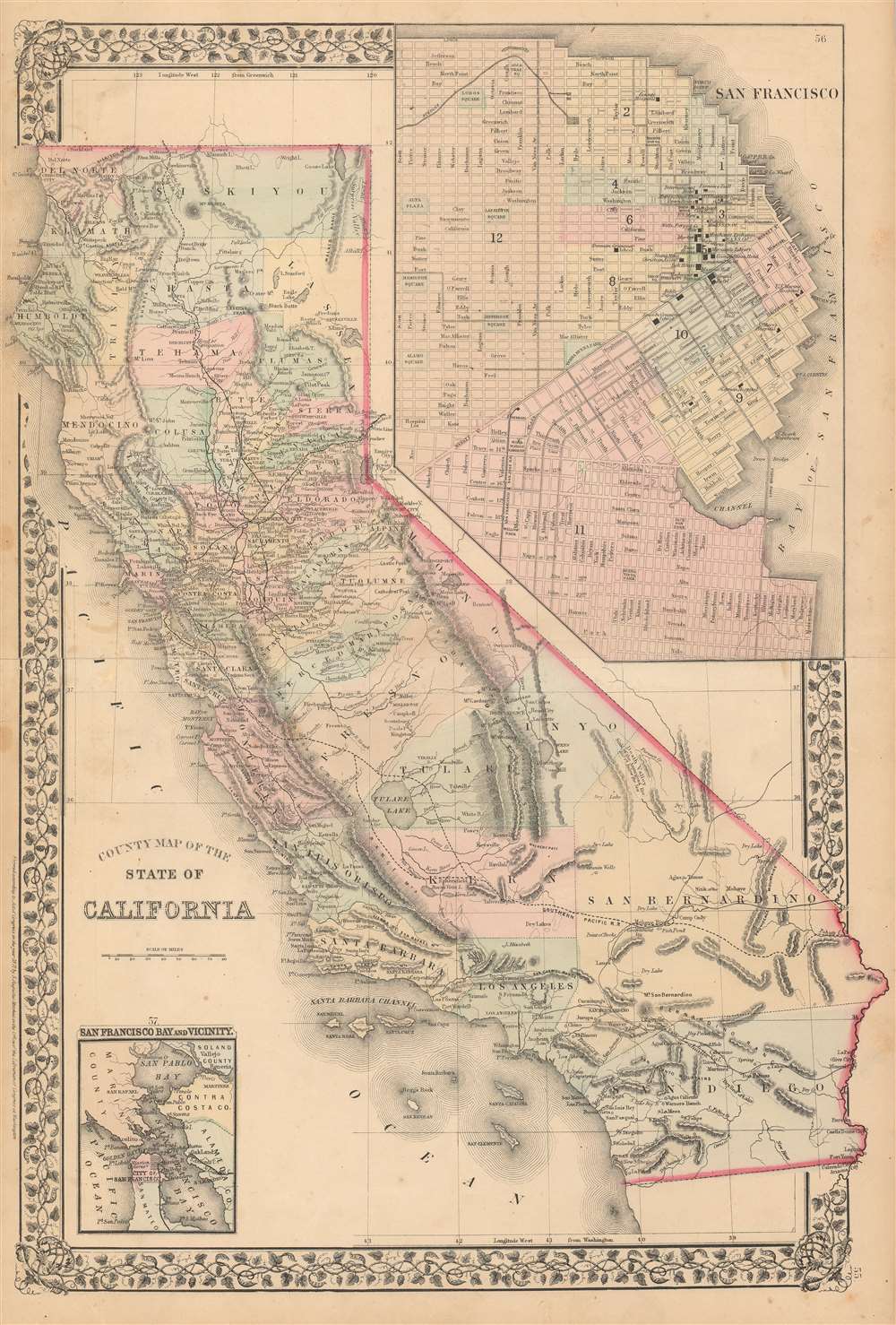 An ephemeral edition of Mitchell's iconic map of California.

This is an 1871 Samuel Augustus Mitchell, Jr. map of California. The map depicts the region from the Pacific Ocean to Nevada and from Oregon to Baja California. Highly detailed, myriad cities and towns are labeled throughout the state, including Los Angeles, Sacramento, San Francisco, Oakland, Santa Barbara, and San Diego. Counties are identified and shaded different colors to allow for easy differentiation. Railroads are identified by both thick black lines indicating completed routes and dashed black lines for planned routes. Mountains (including the Sierra Nevada), rivers, and lakes are shown. An inset map in the upper right corner depicts the city of San Francisco. Myriad streets are illustrated and labeled, as are a handful of buildings, including the Metropolitan Theater, the opera house, the Wells Fargo office and the International Hotel. City wards are also illustrated and shaded different colors to allow the viewer to differentiate between them. A second smaller inset map in the lower left corner depicts the San Francisco Bay and Vicinity from San Pablo Bay and Vallejo to Point San Mateo.

This map was created by Samuel Augustus Mitchell, Jr. and published as pages 55 and 56 in the 1871 edition of his New General Atlas.

Mitchell Jr., S. A., Mitchell's New General Atlas, containing Maps of the Various Countries of the World, Plans of Cities, Etc., Embraced in Fifty-five Quarto Maps, forming a series of Eighty-Seven Maps and Plans, together with Valuable Statistical Tables. 1871 Edition.     Mitchell's New General Atlas was published by Samuel Augustus Mitchell, Jr., the son of the prolific cartographer Samuel Augustus Mitchell. Many of the plates are derived from the his father's Mitchell's Universal Atlas, but not directly. The Mitchell's Universal Atlas was initially sold to Thomas, Cowperthwait, and Company in 1849, and again to Charles Deliver in 1856. It was Deliver who introduced the new vibrant color scheme, abandoning the older Mitchell's Universal Atlas green borders and themes for bright reds, blues, and yellows. Samuel Augustus Mitchell, Jr. acquired the Deliver plates in 1859. He added his own floral motif border, but doubled down on the vibrant color scheme, thus introducing to the American public the most vividly colored American atlas of the 19th century. In 1860, he published the first edition of his New General Atlas and, despite a slump in sales during the American Civil War, attained a level of success to rival his father. Mitchell would continue to publish the New General Atlas until 1887, when the firm formally closed.