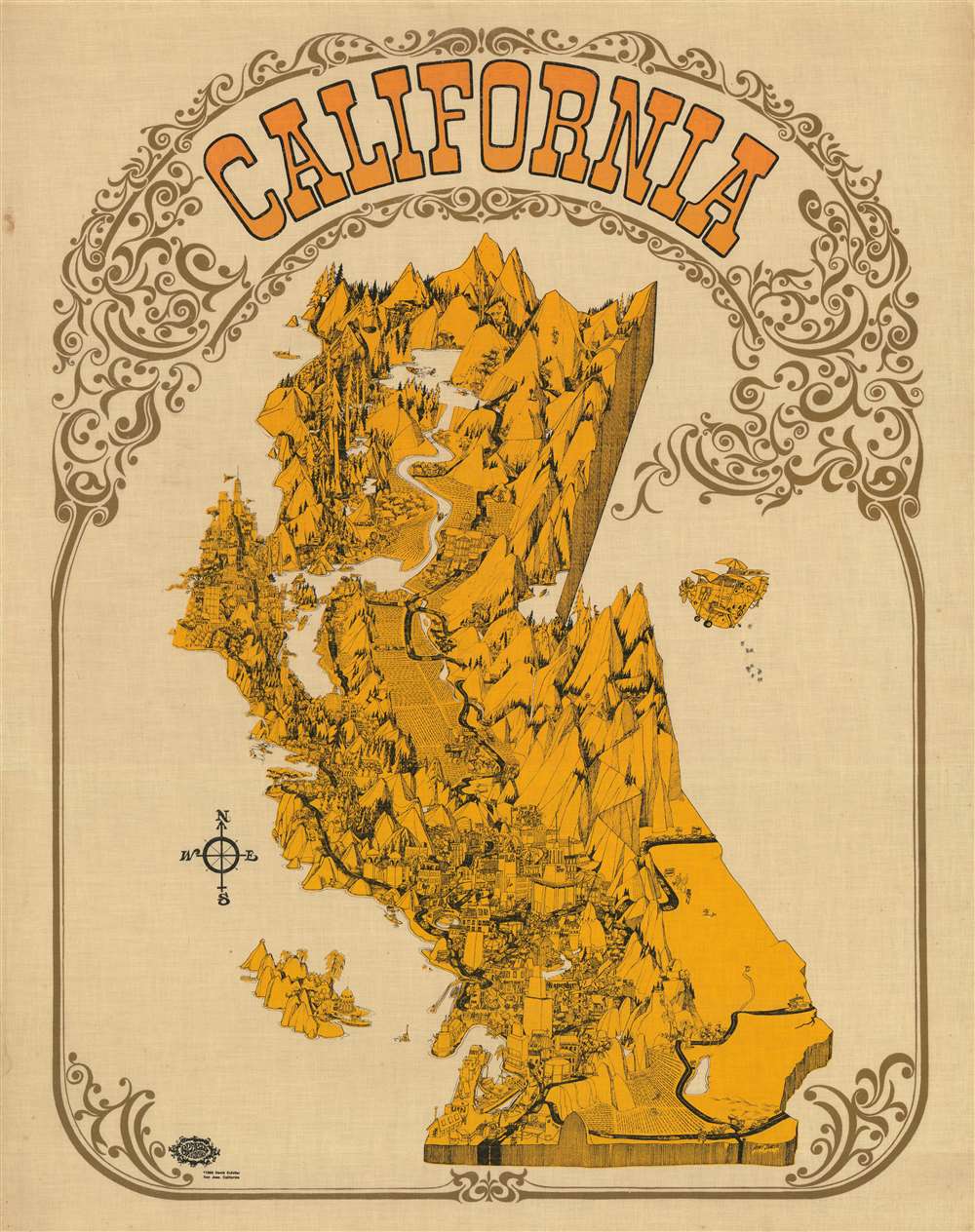 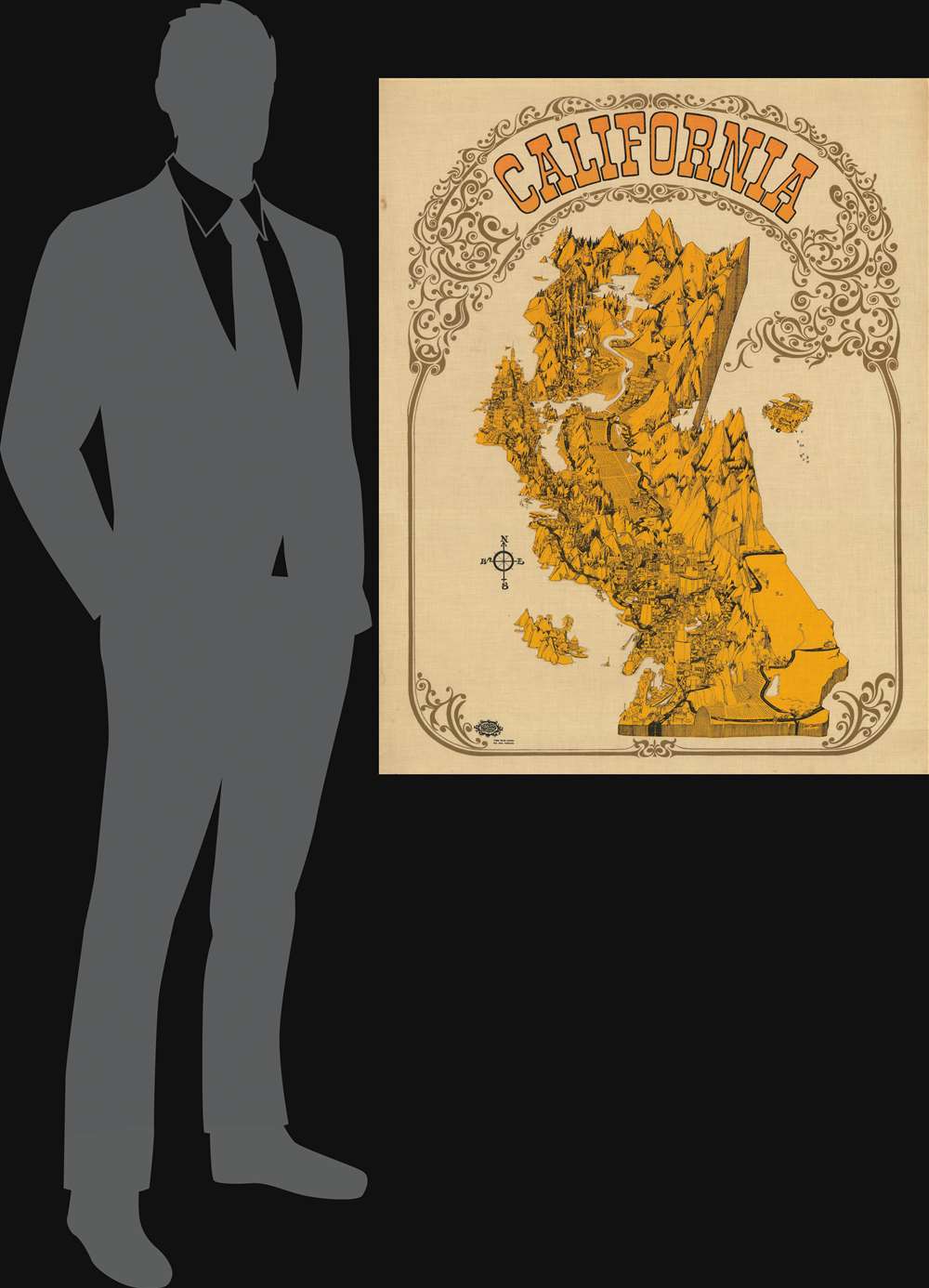 Rare 1968 pictorial map of California, screen-printed on linen. This large and exceptionally groovy cartoon map depicts hippie-era California with sharp wit and a scenester's savvy. San Francisco and Los Angeles are disproportionately large, as are the mountains along California's eastern border. The sequoias of the north and palm trees of the south evoke the climatological variation of the state. Political variations are also alluded to: while San Francisco sports banners reading 'LOVE' and 'HAIGHT ASHBURY LOVES YOU,' Sacramento's capitol building is decorated with a traffic sign reading 'FAR RIGHT ONLY' while a billboard reads 'PAVE VIET-NAM.' Fishing and hiking scenes dominate the north, homey farms grace the middle of the state, while Southern California is dominated by burger joints, traffic-jammed highways, and smog alerts. The coastline is marked with naval bases and lots of beaches: Redondo, Manhattan, Topanga, and 'San Gregorio Nudist Beach: No Peeking.'

The map was published by Sparta Graphics, who from 1966 to 1968 were among the preeminent printers of band posters, venue promotional flyers, and album covers for the San Francisco music scene. Consequently, this map is filled with references to the bands that made up the California musical landscape of the late sixties. The Jefferson Airplane (ubiquitous in Sparta Graphics' posters) clatters over the mountains; The Doors can be seen playing in North L.A.; The tractor featured in Sparta's poster for Buffalo Springfield is reprised in the fields of Napa. In San Francisco even more bands get shout-outs: Blue Cheer, Big Brother, and the Holding Company as well as the venerable Fillmore get their due. Across the bay in Oakland, Canned Heat get a billboard to themselves. Quicksilver Messenger Service is named twice: once in San Francisco, and again serenading San Quentin prison. Sparta Graphics' offices in San Jose are named as well.

1967: The Summer of Love and Haight-Ashbury

Also called Flower Children, hippies were suspicious of the government, rejected consumerist values, and opposed war. The hippie movement reached its peak in the summer of 1967, called the Summer of Love, when over 100,000 people congregated in San Francisco around the intersection of Haight Street and Ashbury. The small neighborhood could not handle the massive influx. Overcrowding, hunger, drug problems, homelessness, and crime rose precipitously. By the fall of 1967, hippies began to filter out of the neighborhood. Those that remained even held a mock funeral declaring 'The Death of the Hippie.'

This poster was drawn by John F. Johnson and printed by Dave Schiller of Sparta Graphics in 1968. Most were printed on paper, with a limited number printed on sturdier linen (current example) for use in record shops and related businesses. OCLC shows one example at the University of Kansas, and an example (on paper) appears in Rumsey. We have seen several examples appear on the market, but there is not an extensive auction or catalogue history for this work.

David Schiller (c. 1945 - ????) was a San José, California music promoter and printer whose printing venture with artist Jim Michaelson, Sparta Graphics, produced posters and album covers for many bands and venues of the San Francisco scene between 1966 and 1968. Learn More...


John F. Johnson (October 7, 1944 – January 23, 2017) was a Santa Cruz, CA. artist and illustrator. Having graduated from San Jose State University with a B.A. in fine arts, he worked as a cartoonist and graphic designer. In 1967, he established Teapot Graphics, an art studio located on the 3rd floor bellfry of a former church in downtown Los Gatos. Some of his most recognizable work appeared in the promotional posters of David Schiller's Sparta Graphics, including iconic show posters for Buffalo Springfield and the Jefferson Airplane. His designs represented the cultural scene of the late sixties, emphasizing fun, funkiness and a playful sense of humor. Learn More...

Good. 3-color screen print on linen, backed on a board. Some fraying well away from image.