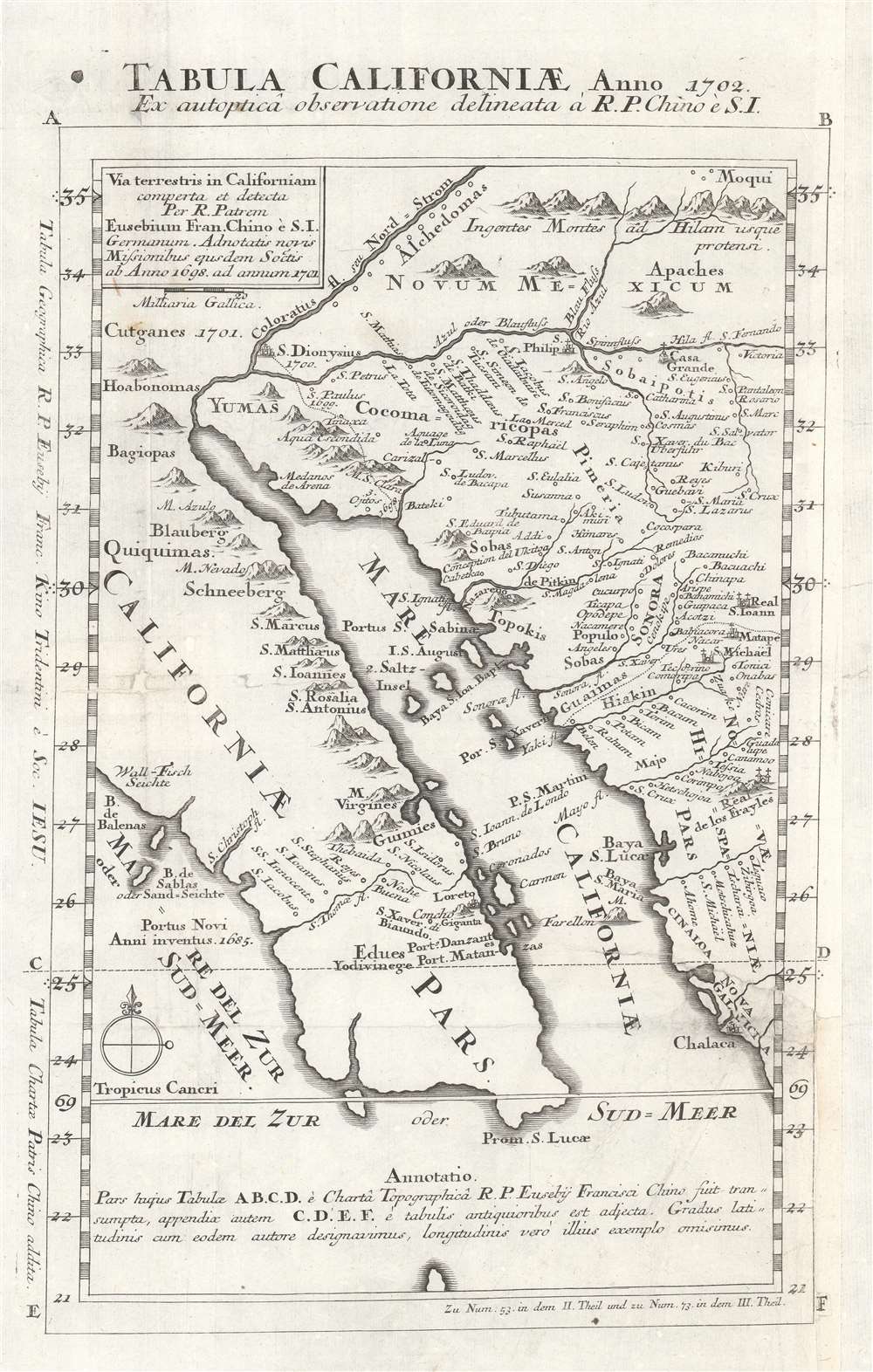 First map to definitively prove California was not an island.
$2,000.00

One of the most important maps in cartographic history, this is Jesuit Father Eusebio Francisco Kino's 1702 map proving definitively that California was a peninsula, not an island. Kino's map centers on the Gulf of California, and covers from modern day Mexicali and Yuma south as far as Cabo San Lucas and Mazatlán, Mexico. Kino was sent into this region, then known as the Pimeria Alta, to establish the viability of Jesuit missions on the California coast. On behalf of the Church Kino mapped a region of some 200 square miles, and, from 1697, established numerous missions extending well up the California coastline.

Nonetheless, Kino's greatest claim to cartographic fame is definitively proving that California, which has been considered an island since the late 17th century, was in fact a peninsula connected to the mainland of North America. It is written that during his travels Kino, climbing to a high point near the headwaters of the Colorado river, looked west. Seeing only land, Kino declared unequivocally that California was part of the North American continent. Such is reflected in this map, one of the first published to stand against the establish convention of Insular California. Most better European cartographers, who may have already had doubts about the Insular California theory, adopted Kino's geography, but some, such as the influential Herman Moll, adamantly insisted on California's insularity. It was not until 1746, when Kino's findings were confirmed by another Jesuit, Fernando Consag, that the Insular California apocrypha was finally put to rest.

This map has an unusual publication history. The map was drawn in 1702, as dated, but was not published for over 20 years. The first published edition, offered here, appeared in Joseph Stöcklein's Allerhand So Lehr-Als Geist-Reich Brief, Schrifften und Reis-Beschreibungen, welche von denen Missionariis, published Augsburg, 1726. It was published again in a revised 1728 edition of the Stocklein's book, with the volume's title changed to Neue Welt Blott. Today it is extremely rare.

Eusebio Francisco Kino (August 10, 1645 – March 15, 1711) was an Italian Jesuit priest, missionary, cartographer, geographer, explorer and astronomer. Kino was born Eusebius Chinus in the town of Taio, in the then sovereign Prince-Bishopric of Trent. He was educated in Innsbruck, Austria and joined the Jesuit order on November 20 of 1665. After being trained in the tenants of the Jesuit order, he received Holy Orders on June 12, 1677. Kino was sent to the New World where is first assignment was to lead the Atondo Expedition (1683-1685) to the Baja region of New Spain. There is established his first mission, the Misión San Bruno, in 1683. Although this mission was abandoned due to drought, he was later sent to the Pimeria Alta, the modern-day Sonoran Desert, to establish additional missions. He remained in this region for 24 years, mapping it with considerable detail as far as modern day California and Arizona, and establishing numerous missions. As part of this work he produced some of the first accurate maps of the region and is credited with proving definitively that California was a peninsula, not an island, as previously believed. He died from fever on March 15, 1711, at the age of 65, in what is present-day Magdalena de Kino, Sonora, Mexico. His skeletal remains can be viewed in his Crypt in that city to this day.