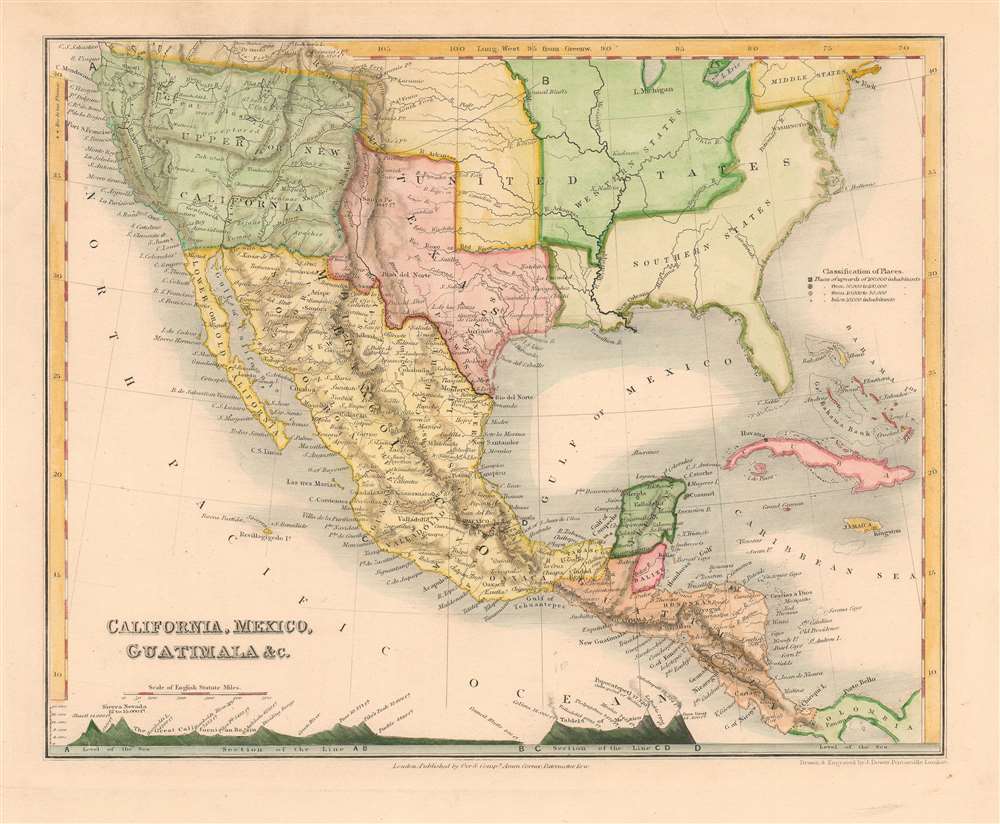 This is John Dower's 1850 map of Mexico, Texas, Central America and Western North America. Includes Texas in its post-statehood, pre-'Compromise of 1850' configuration, with full borders extending west beyond Santa Fe and north to include a small ill-defined stovepipe. The map has been updated to show the 1848 border as per the Treaty of Guadalupe Hidalgo; Mexico's lost claims north of the new border are collectively named 'Upper New California' on the map. This region, in particular, has been extensively re-worked, showing abundant mountain ranges not present in earlier issues of this map.

Texas features prominently at center, with the borders used from roughly 1846 to 1850. The borders of the Republic of Texas were in dispute from the earliest days of the Texan Revolution. The Republic-claimed borders followed the Treaties of Velasco between the newly created Texas Republic and Mexican leader, Antonio López de Santa Anna. The treaties established an eastern boundary following the 1819 Adams-Onís Treaty between the United States and Spain, which established the Sabine River as the eastern boundary of Spanish Texas and western boundary of the Missouri Territory. The Republic's southern and western boundary with Mexico was more nuanced. Texas claimed the Rio Grande del Norte as its western and southernmost border, while Mexico argued for a boundary much further east at the Nueces River. When Texas was annexed into the United States, the agreement followed the Republic claimed boundary, thus absorbing Mexican claimed territory as far west as Santa Fe. This escalated already existing tensions between the United States, the former Republic of Texas, and Mexico, ultimately triggering for the Mexican-American War (1846 -1848).

Also new to this issue of the map are the attractive profiles of the mountain ranges of North America, both in the United States and Mexico, which appears at the bottom of the map. The two profiles, keyed to their locations on the map by letters, show the topography of the American West from the Pacific coast to the Missouri River, and from Manzanillo to Veracruz in Mexico. The profiles include some of the continent's most famous peaks at the time: Shasta and Pike's Peak, for example, and Mexico's volcanos of Colima, Popocateptl and Citaltepetl.

Dower's map first appears in an Orr atlas in 1832 with the title 'Mexico and Guatimala' and thereafter was reprinted in both Orr and Teesdale atlases, with significant updating, until at least 1860. This state of the map appears to be scarce. We see only one example in OCLC with this title, catalogued with an uncertain date at Arizona State Library.

Petermann/ Milner A descriptive atlas of astronomy and of physical and political geography (Orr, London) 1850