1874 Warner and Beers Map of California and Nevada 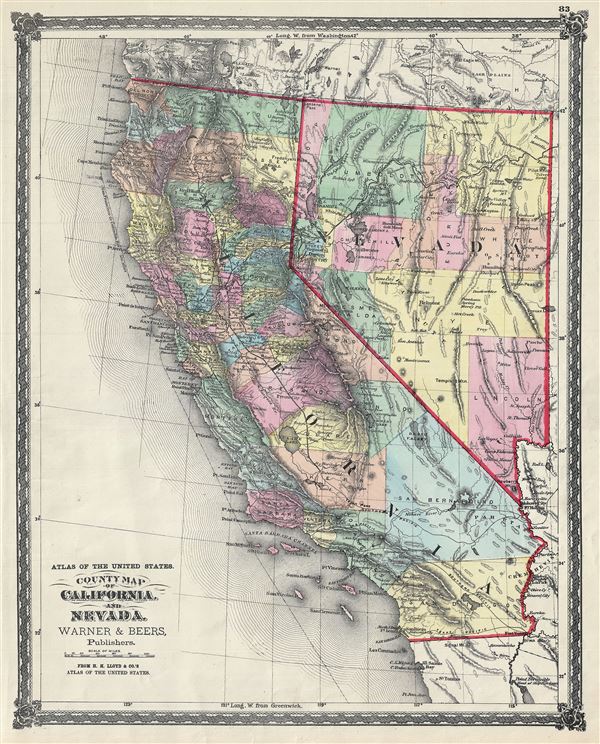 1874 Warner and Beers Map of California and Nevada

This is a beautiful 1874 Warner and Beers' map of California and Nevada. It depicts the states of California and Nevada in extraordinary detail, noting major towns, counties, cities, lakes, rivers, railway lines, roads and other topographical features, with relief rendered by hachures. The map is color coded according to counties. This map was issued as plate no. 83 and published by Warner and Beers and is derived from H.H. Lloyd and Co.'s Atlas of the United States.


H.H. Lloyd & Company (fl. 1860 - 1890) were 19th century American map and atlas publishers based in New York City. They should not be confused with the competing New York firm with of a similar name, J. T. Lloyd, with whom H. H. Lloyd had a ongoing conflict. The firm was founded by H. H. Lloyd and Benjamin S. Demarest in 1860. The H. H. Lloyd firm published numerous atlases, wall maps, and gazetteers before, during and after the American Civil War. These include some of the best maps of the period, many of which were used as battle plans by various Civil War generals on both sides of the conflict. From various offices around the city, the H.H. Lloyd firm worked with other prominent firms of the period including H. S. Stebbins, Warner and Beers to produce numerous state and county atlases. Around 1880 Demarest took full control of the firm, possibly suggesting that Lloyd either died or retired. Though H. H. Lloyd and Company continued to produce maps well in to the 1880s, the firm lost much of its momentum and eventually, by 1890, closed its doors. H. H. Lloyd is sometimes confused with J. T. Lloyd, another map publisher of the period who produced a small number of United States and regional maps sympathetic to the Confederacy. Both H. H. Lloyd and B. Demarest were Union supporters, Demarest having served as a Major in the Union Army.