1873 Holt and Gibbes Pocket Map of California and Nevada 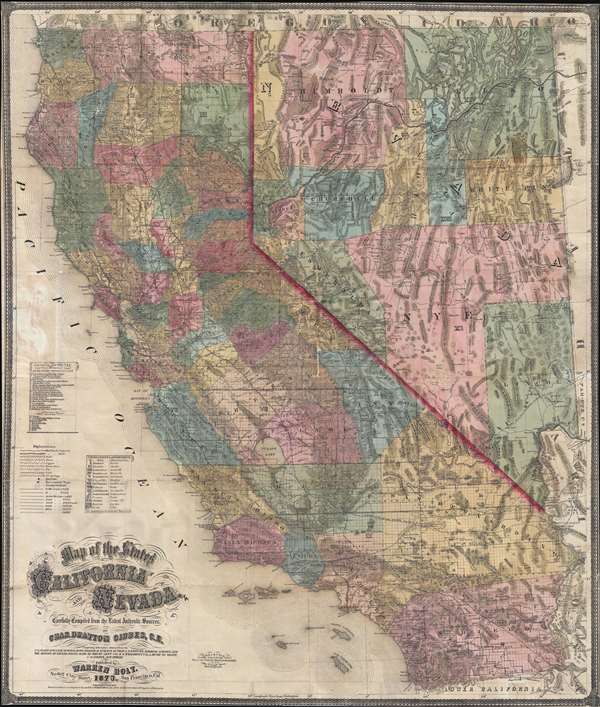 1873 Holt and Gibbes Pocket Map of California and Nevada

No amount of time spent on this map would be wasted; its detail is fascinating. - Wheat
$2,800.00

A beautiful and rare variant on the first edition second state of Warren Holt and Charles Drayton Gibbes' 1873 map of California and Nevada, considered to be one of the finest large-scale maps of California to appear in the second half of the 19th century. The map covers all of California and Nevada with exceptional detail throughout. A key to the left of the map names 14 Federal Land Districts, 20 California Judicial Districts, and 9 Nevada Counties. The key, which was inherited from the first edition first state, is somewhat out of sync with the updated second state, which add Eureka County to Nevada. Additional coding identifies 10, 20, and 30 mile railroad grants to the Central Pacific, Western Pacific, C. and O., Southern Pacific, P. and S., S. and C., and A. and P. Railroads.

This map is derived from Gibbes and Holt's 1869 larger format map of California. Two versions, both considered first editions, were released in 1873. The first state named only 11 Federal Land Districts. The second state, offered here, was expanded to 14 Land districts. As noted by Rumsey

The change of the Land Districts from eleven to fourteen includes a radical change in boundaries, some names changed, and numbering changed, indicating a major restructuring of the General Land Office administration in 1873.

Although Gibbes takes credit as the compiler of this map, it is significantly improved upon the survey work of Josiah Dwight Whitney, director of the California Geological Survey. Whitney's remapping of California was the first wide-ranging scientific survey of California to receive state funding. The completion of Whitney's survey early in 1873 no doubt inspired Gibbes and Holt to release this vastly improved map (over 1869 precursor) featuring, among other details, updated topography and mineral deposits. Gibbes also compiled data from the U.S. Coast Survey, various railroad surveys and explorations made by R. S. Williamson, Henry de Groot's work in Nevada, his own surveys, and others. It was engraved by Samuel Benton Linton in Philadelphia, PA.

Charles Drayton Gibbes (1813 – May 25, 1893) was an American civil engineer, publisher, surveyor, and cartographer active in California during the latter part of the 19th century. The son of a wealthy South Carolina plantation owner and the cousin of Mrs. John Jacob Actor. Gibbes relocated to California with the first wave following the 1848 discovery of Gold at Sutter's Mill. His goal was not to mine gold, but to follow the miners and survey gold discoveries in the region. He published a number of important maps relating to the Gold Rush, including the 1851 New Map of the Gold Region in California and Map of the Southern Mines. He later partnered with publisher Warren Holt to produce an important sequence of large format maps of California issued between 1869 and 1878. After a long and distinguished career as a California surveyor and civil engineer, Gibbes took a position as curator of mineralogy at the California Academy of Sciences in San Francisco. Learn More...


Warren Holt (fl. 1861 – 1881) was an American publisher, school supply merchant, and map seller based in San Francisco, California in the second half of the 19th century. Holt was initially sent to California to act as an agent for the New York based map publisher J. H. Colton and Company. He was quick to recognize the opportunity available to an independent map publisher able to quickly compile and publish maps of the rapidly changing and expanding California political and geographical arena. He partnered with the prominent civil engineer and surveyor, Charles Drayton Gibbes, in 1868 to published a series of highly detailed large format maps of California issued between 1869 and 1878. At various times, Holt maintained offices at 73, 171 and 305 Montgomery Street, as well as at 607 Clay Street, San Francisco. Learn More...


Samuel Benton Linton (1838 – August 28, 1927) was a mapmaker, draughtsman, and lithographer active in Philadelphia in the second half of the 19th century. Linton was born at Spring House, Montgomery County, PA, in 1838. He entered the army where he was trained as a draughtsman and assigned to the U.S. Coast Survey. During his tenure with the Coast Survey he completed an important map of Hawaii. Although, like most Coast Survey Men, Linton supported the Union, on a visit to his sister in Richmond near the end of the war he was impressed into the Confederate Army. He refused to fight against Union soldiers and was instead assigned to the Engineering Corps, to which his talents were better suited. As an engineer he created a detailed plan of the Battle of Chickamauga (September 18-20, 1863). Unfortunately, with his name attached to a known Confederate Battle Plan, Linton was unable to resume his duties with the U. S. Coast Survey. Instead he relocated to Philadelphia where he established himself as an engraver and lithographer. He produced a number of maps for various publishers including Warren Holt's important maps of California. During this period Linton maintained offices at 148 1/2 South Fourth Street, Philadelphia, PA. Around 1877 he relocated to Chester County Pennsylvania to take a position as a school director. He Died in Devon, PA in 1927. Learn More...