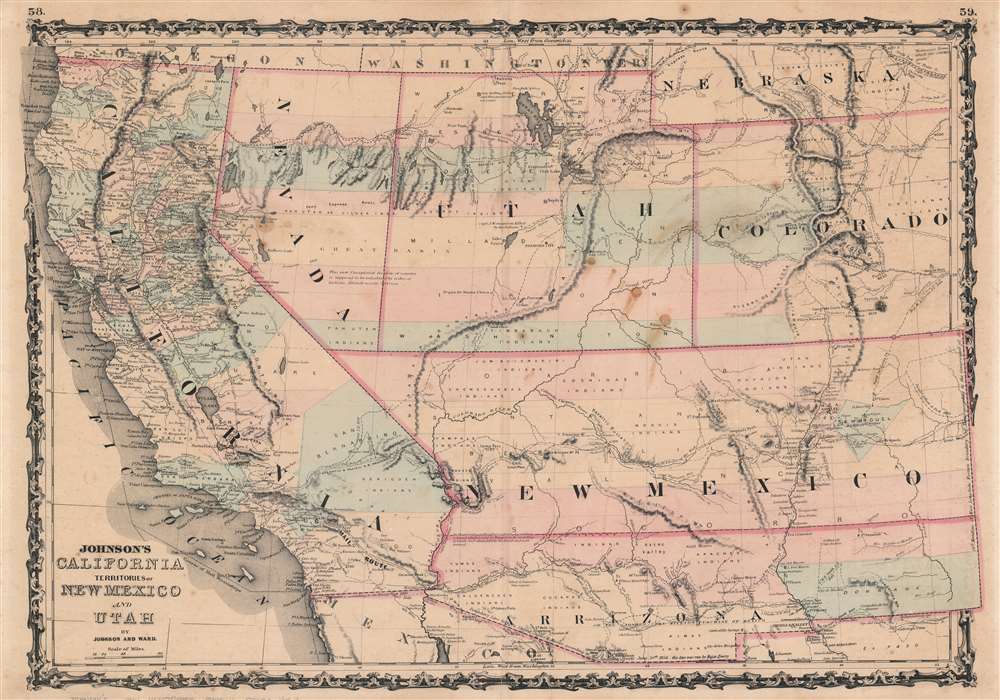 An intriguing and unusual map of the southwestern United States.

This is an 1863 A. J. Johnson map of California, Nevada, Utah, New Mexico, Arizona, and Colorado. Filled with amazing historical detail, the map presents an unusual configuration of these western states.

Utah extends farther east and west than normal, which has the effect of shrinking Nevada. Arizona and New Mexico appear with their east-west border instead of the north-south border as it is today. This configuration fell out of favor because of the proposed routes for the yet unfinished transcontinental railroad. With this configuration, one of the two states would have been completely ignored by the railroad, which Congress deemed to be unacceptable. Nebraska appears in the upper right corner with its panhandle extended as far as Utah. This would change with the creation of the Wyoming Territory when a large part of this extended panhandle was given to the newly created territory. California's borders, on the other hand, appear exactly as they do today since it gained statehood as part of the Compromise of 1850. In an intriguing stylistic choice uncommon for Johnson, the map extends over the border in both the upper left and lower right corners, allowing for a wider geographic scope.

Johnson references an immense amount of American history throughout this piece. Published at the height of the American Civil War, very little that conflict bleeds into Johnson's work. However, by illustrating New Mexico and Arizona with their east-west border, Johnson is implicitly referencing Confederate Arizona. Confederate Arizona was a territory claimed by the Confederate States of America from 1861 until 1865. The idea for an Arizona Territory appears as early as 1856 when the government of the Territory of New Mexico began to express concerns about being able to effectively govern the southern part of the territory, as it was separated from Santa Fe by the Jornada del Muerto, a particularly unforgiving stretch of desert. The New Mexico territorial legislature acted on these concerns in February 1858, approving a resolution in favor of creating an Arizona Territory, with a north-south border to be defined along the 32nd meridian (from Washington). Impatiently waiting for Congress to approve the creation of the new territory, 31 delegates met at a convention in Tucson in April 1860 and drafted a constitution for the 'Territory of Arizona,' which was to be organized out of the New Mexico Territory below 34th parallel. The convention even elected a territorial governor and a delegate to Congress. Congress, however, was reluctant to act. Anti-slavery Representatives knew that the proposed territory was located below the line of demarcation set forth by the Missouri Compromise for the creation of new slave and free states, and they were not inclined to create yet another slave state. Thus, Congress never ratified the proceedings of the Tucson convention, and the Provisional Territory was never considered a legal entity.

At the beginning of the Civil War, support for the Confederacy ran high in the southern parts of the New Mexico Territory. Local concerns drove this sentiment, including a belief that the war would lead to an insufficient number of Federal troops to protect the citizens from the Apache. Others felt neglected by the government in Washington. Also, the Butterfield Overland Mail Route (an overland mail and stagecoach route from Memphis and St. Louis to San Francisco) was closed in 1861, depriving the people of Arizona of their connection to California and the East Coast.

All of these factors led to the people of the southern New Mexico Territory, or the Arizona Territory, to formally call for secession. A convention adopted a secession ordinance on March 16, 1861, with a subsequent ordinance ratified on March 28, establishing the provisional territorial government of the Confederate 'Territory of Arizona'. The Confederate Arizona Territory was officially proclaimed on August 1, 1861, following Lieutenant-Colonel J. R. Baylor's victory over Union forces in the First Battle of Mesilla, and the government of the Confederacy officially recognized the territory on February 14, 1862. However, by July 1862, Union forces from California, known as the 'California Column,' were marching on the territorial capital of Mesilla. Sent to protect California from a possible Confederate incursion, the 'California Column' drove Confederate forces out of the city, allowing them to retreat to Franklin, Texas. The territorial government fled as well and spent the rest of the war in 'exile.' First, they retreated to Franklin, then, after Confederate forces abandoned Franklin and all of West Texas, to San Antonio, where the 'government-in-exile' would spend the rest of the war. Confederate units from Arizona would fight for the rest of the war, and the delegate from Arizona attended both the First and Second Confederate Congresses.

Johnson's map also details the many trails and expeditions that weave their way through this territory. Among these are Fremont's 1844 expedition, Major Emory's 1846 expedition during the Mexican War, the route of the Mexican Border Commission, the Santa Fe Trail, and the Pony Express Route. Two of the proposed routes for the transcontinental railroad appear as well. Frontier forts are identified throughout, including Fort Bridger, Fort Defiance, and Bent's Fort. Sutter's Mill, where gold was first discovered in California launching the California Gold Rush, is labeled, along with myriad other cities, towns, and mining camps throughout California.

This map was created by A. J. Johnson and published by Johnson and Ward in the 1863 edition of Johnson's New Illustrated Family Atlas. Johnson produced eight different states of his map of the American southwest, with this being an example of the fifth state published between 1862 and 1863. One example is cataloged in OCLC and is part of the institutional collection at the Huntington Library.

Johnson, A. J., Johnson’s New Illustrated Family Atlas, with descriptions, Geographical, Statistical, and Historical , 1861.     Johnson's New Illustrated Family Atlas was produced in numerous editions from about 1860 to 1887. Johnson's first atlas was mostly likely the 1859 edition of Colton's General Atlas which both aesthetically and comprehensively very similar to the 1860 first edition of the New Illustrated Family Atlas. Johnson's atlas was noteworthy in its day as one of the few commercially produced American atlases that could compete with more established European Atlases. Although he called the atlas 'Steel Plate' on the title page for marketing purposes, Johnson in fact incorporated modern lithographic printing techniques and lower quality woven wood pulp paper to economically produce large format maps in quantity. He also began publishing the New Illustrated Family Atlas on the cusp of the American Civil War, a decision that proved fortuitous, as the war corresponded to a general increased interested in cartography. For the most part, Johnson's Atlas was sold by subscription; nonetheless it became so popular that for at time he was considered the largest publisher in the world. Other than the first edition, the atlas itself has no true editions. Rather, Johnson incorporated updated maps as they became available, so each example of the Johnson atlas might well contain unexpected and scarce individual maps. Johnson's map of the American Southwest, for example, appeared in more than 17 different states, each illustrating minor variations to the rapidly chasing geography of that region. Moreover, Johnson's offered a service whereby he would mail updated map pages that could be tipped into older atlases to keep them current. Generally speaking, Johnson's atlas was issued in four periods - each defined by a distinctive decorative border. The earliest edition featured a strapwork border that appears as rolled and decoratively cut leather. This border work remained in use until 1863. In 1864 Johnson started using an updated fretwork or grillwork border that resembles worked iron - as in a decorative fence. This border was in use from 1863 to 1869. The 1863 edition of Johnson's atlas used both borders and is considered transitional. From 1870 to 1882, Johnson introduced a new border that featured elaborate Spirograph style geometric designs, which was used from 1870 to 1882. After 1880 a new border different but aesthetically similar to the Spirograph border began appearing. Certain editions of the atlas issued from 1880 - 1882 were transitional.