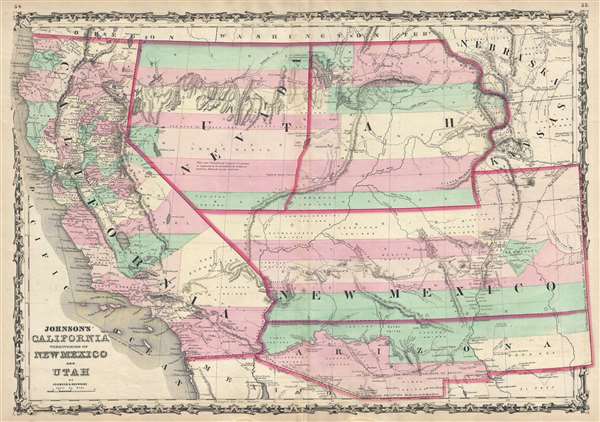 The scarcest and most historically significant of Alvin Jewett Johnson’s southwest map series. This is the 1860 first edition of A. J. Johnson and Ross C. Browning’s map of California, Utah, Nevada, New Mexico, and Arizona. The map covers from the 42nd parallel south to the Mexico border and from the Pacific to modern day Colorado. Although later editions of Johnson's Family Atlas are common, the 1860 edition, which was Johnson’s first, had the smallest print run of the entire series and is for all intent and purposes, unobtainable.

Unlike most maps in the 1860 Johnson atlas, this map was a unique production and therefore not based upon the earlier atlas maps of J. H. Colton. Rather, it seems that Johnson derived this map by dissecting the plates of his 1859 wall map of North America and then incorporating, oftentimes superimposing, more contemporary detail.

Such is the case in the Nevada – Utah territory, where both territories are labeled Utah, despite being split in half along longitude 113 and the miss-mapped Sevier / Santa Clara River. Johnson revised this curious border to strictly adhere longitude 116 in the subsequent 1861 edition of this map. Eastern Utah here extends well into modern day Colorado incorporating Middle Park, but not North Park and South Park, within its borders. The Colorado Gold Region, which was first discovered in 1858, is well labeled. Subsequent editions of this map, published in 1861 shortly after the incorporation of Colorado, revise this border to include the territory. Fillmore City is identified as the capital of Utah and a Mormon Settlement is noted along the Nevada – California border.

Of even greater interest in Johnson’s curious treatment of New Mexico and Arizona. Here the region is divided along the 34th parallel, with Arizona occupying the southern part of modern-day New Mexico. This configuration first appeared in wall maps of the United States and North America issued by Johnson and Colton in 1859. The idea for a separate Arizona Territory appears as early as 1856, when the government of the Territory of New Mexico began to express concerns about being able to effectively govern the southern part of the territory, as it was separated from Santa Fe by the Jornada del Muerto, a particularly unforgiving stretch of desert. The New Mexico territorial legislature acted on these concerns in February 1858, approving a resolution in favor of creating an Arizona Territory, with a north-south border to be defined along the 32nd parallel. Congress was slow to address the new territory, so 31 delegates met at a convention in Tucson in April 1860 where they drafted a constitution for the 'Territory of Arizona', which was to be organized out of the New Mexico Territory below 34th parallel. The convention even elected a territorial governor and a delegate to Congress. Increased tension between the northern and southern states nonetheless, prevented Congress from taking action. Anti-slavery congressmen knew that the proposed territory was located below the line of demarcation set forth by the Missouri Compromise for the creation of new slave and free states, and they were not inclined to create yet another slave state. Thus, Congress never ratified the proceedings of the Tucson convention, and the Provisional Territory of Arizona was never became a legal entity. Nonetheless, it does appear on a few, rare, antebellum maps – as here.

At the beginning of the Civil War, one year after this map as issued, support for the Confederacy ran high in the southern parts of the New Mexico Territory. Local concerns drove this sentiment, including a belief that the war would lead to an insufficient number of Federal troops to protect the citizens from the Apache, while others simply felt neglected by the government in Washington. Also, the Butterfield Overland Mail Route (an overland mail and stagecoach route from Memphis and St. Louis to San Francisco) was closed in 1861, depriving the people of Arizona of their only connection to California and the East Coast.

All of these factors led to the people of the southern New Mexico Territory, or the Provisional Arizona Territory, to formally call for secession, and a convention adopted a secession ordinance on March 16, 1861, with a subsequent ordinance ratified on March 28, establishing the provisional territorial government of the Confederate 'Territory of Arizona'. The Confederate Arizona Territory was officially proclaimed on August 1, 1861 following Lieutenant-Colonel J. R. Baylor's victory over Union forces in the First Battle of Mesilla, and the territory was officially recognized by the government of the Confederacy on February 14, 1862. However, by July 1862, Union forces from California, known as the 'California Column' were marching on the territorial capital of Mesilla. Sent to protect California from a possible Confederate incursion, the 'California Column' drove Confederate forces out of the city, allowing them to retreat to Franklin, Texas. The territorial government fled as well and spent the rest of the war in 'exile'. First, they retreated to Franklin, then, after Confederate forces abandoned Franklin and all of western Texas, to San Antonio, where the 'government-in-exile' would spend the remainder of the war. Confederate units from Arizona fought throughout the Civil War, and the delegate from Arizona attended both the First and Second Confederate Congresses.

It is further noteworthy that this example of Johnson’s map is in pristine condition – a rarity for any early edition of Johnson’s southwest and a special bonus in this supremely uncommon first edition. This map was published by A. J. Johnson and Ross Browning as plate nos. 54-55 in the 1860 edition of Johnson's New Illustrated (Steel Plate) Family Atlas. Rumsey has an example of this map in which the plate nos. are set at 47-48, further commenting that there was a later issue of the atlas published in the same year. This map is identical to the Rumsey example with the exception of the page numbers, leading us to believe it must have come from the 2nd 1860 issue of the first edition.