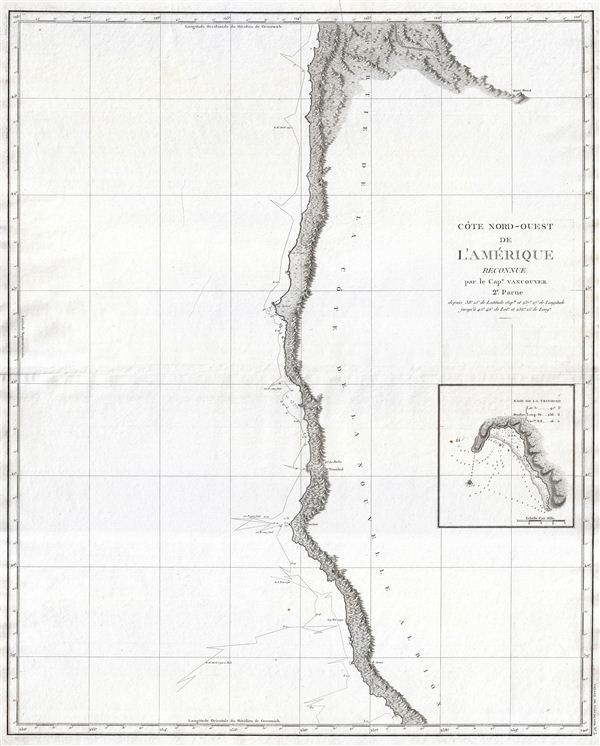 A fine example of George Vancouver's 1799 mapping of the northern California and Oregon. This map covers from Cape Lookout and the Columbia River southward past Cape Gregory, Cape Orford, Port St. George, the Bay of Trinidad, and Cape Mendocino to roughly 38 degrees 15 minutes north latitude. Vancouver mapped this coastline, which he identified as New Albion, recognizing the english claim to this territory established by Sir Frances Drake, in 1792. An inset map of the Bay of Trinidad (Baie de la Trinidad) appears in the lower right quadrant. Vancouver visited the Bay of Trinidad in 1793 and made a special note of the 'friendly and courteous' natives. The route of the Vancouver expedition is shown zigzagging back and for the along the coast. elevation is shown by profile. While inland detail is minimal, there is a more sophisticated mapping of the interior in the upper right quadrant, including a map of the course of the Columbia River to Point Vancouver – the extent of Vancouver's exploration in the region. Mount Hood appears in the distance – as Vancouver's crew must have seen it from the Columbia River. Though not the goal of his expedition, which lay further north, Vancouver's mapping of the California and Oregon coastlines generated the finest costal charts of this region to date and is an important stepping stone in the cartographic history of the American west coast.