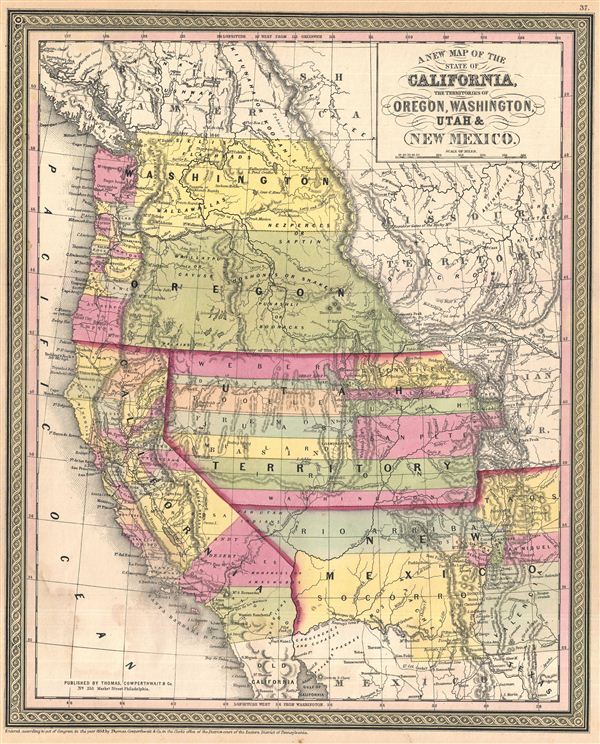 An important map issued just after the California Gold Rush.

A fine example of S. A. Mitchell and J. H. Young's important 1854 map of California and the western territories of Washington, Oregon, Utah, and New Mexico. Based upon Mitchell's seminal pocket map of 1846, this map covers from Vancouver Island to the Gulf of California and from the Pacific shore to Pikes Peak and the Yellowstone River. This vast territory incudes the modern day states of California, Washington, Oregon, Idaho, Montana, Colorado, Wyoming, Utah, Nevada, Arizona, and New Mexico, as well as adjacent parts of Canada and Mexico. The whole is engraved and colored in Mitchell's distinctive style with green border work and vivid pastels. Political and topographical features are noted and color coded with elevation rendered by hachure.

This map was issued in the final years of the California Gold Rush and just prior to the construction of the various transcontinental railroads. Though California, following the Gold Rush population explosion, was admitted as a free state to the Union in 1850, the surrounding territories remained largely dominated by various American Indian nations, many of which are noted. Also noted are the various exploratory, emigrant, and military routes through the region, including the Spanish Trail from Los Angeles to Santa Fe., the Oregon Route, Lewis and Clarke's Route, Lt. Col. Cooke's Wagon Road, Kearney's Route along the Rio Gila. Though the Gadsden Purchase occurred in the same year this map was published, it is not included here, thus is the city of Tucson (Tueson) is set firmly within Mexican territory. However, several pre-Gadsden alternatives to the U.S. Mexico border, as proposed by Bartlett and Graham, are noted.

This map was prepared by S. A. Mitchell for publication by the Philadelphia firm of Thomas Cowperthwait & Co. as plate no. 37 in the 1854 edition of Mitchell's New General Atlas. Dated and copyrighted, 'Entered according to act of Congress in the year 1850 by Thomas Cowperthwait & Co. in the Clerk's office of the Eastern District of Pennsylvania.'