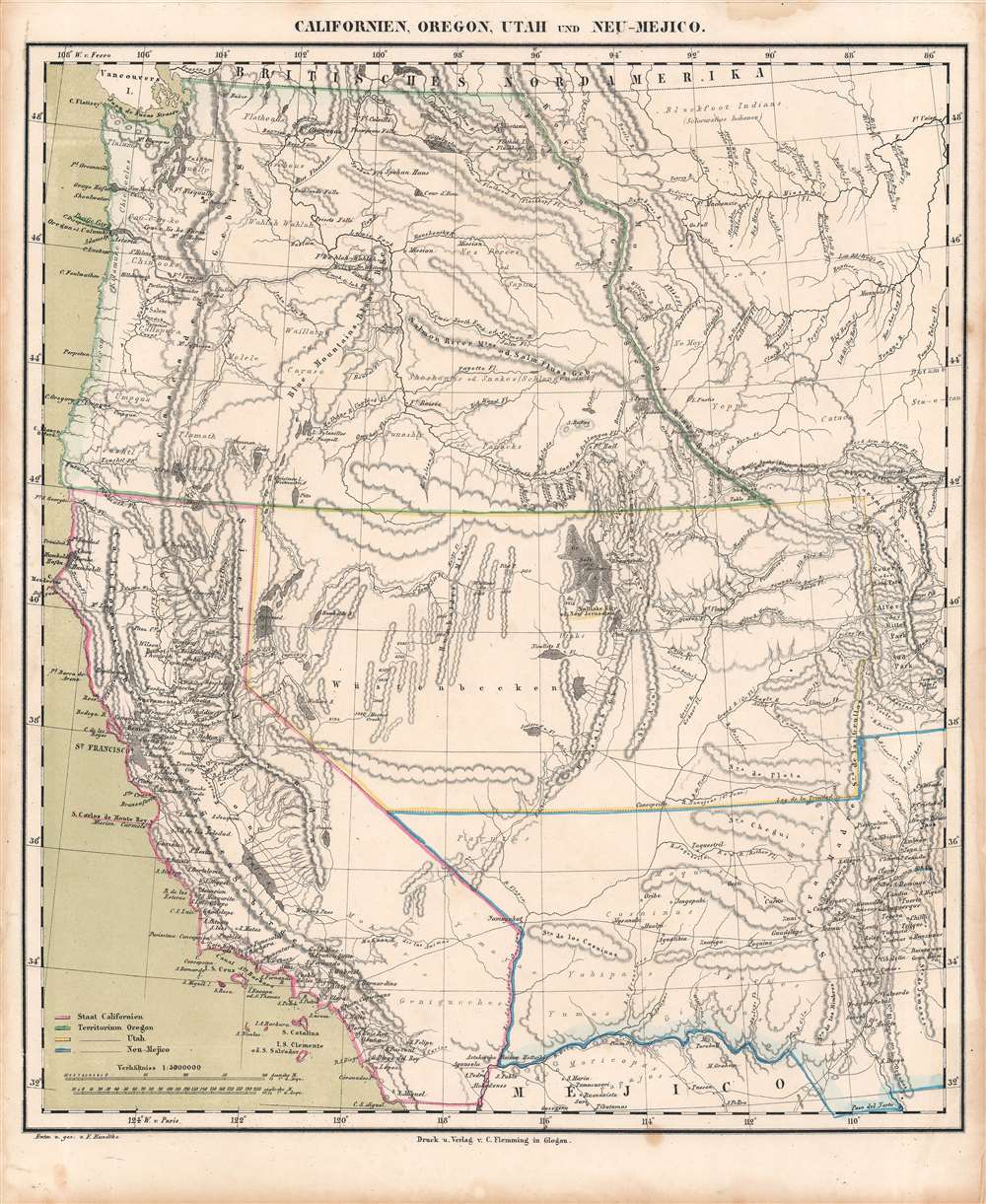 This is a c. 1850 Friedrich Handtke and Carl Flemming map of the western United States at the height of the California Gold Rush. This map was issued soon after California became a state. Coverages extends from the Pacific Ocean to the Rocky Mountains and from Canada to Mexico.

Flemming employs outline color to highlight the state of California, as well as Oregon, Utah, and New Mexico Territories. Flemming's map is one of the most comprehensive 19th-century atlas maps of this part of the United States. It labels cities and towns and details the region's dramatic topography, identifying several mountains in modern-day Colorado while including some fictional ranges in today's Nevada. However, the identification of 'Saltlake City or New Jerusalem' in Utah presents the map's most astonishing detail.

The Mormon Migration and 'New Jerusalem'

Founded by Joseph Smith in the late 1820s, Mormonism and the Church of Jesus Christ of Latter-day Saints suffered persecution as well as dissension within its ranks during the 1830s and 1840s. After being forced to move from Ohio to Missouri and then to Illinois, Brigham Young finally moved the Church and its followers to the Great Basin near the Great Salt Lake. Since early in its history, Joseph Smith and his followers sought to establish a 'New Jerusalem' or 'City of Zion' as a place where the faithful could gather peacefully in fellowship. After moving the Church to Utah and establishing their 'Great Salt Lake City' based on the Plat of the City of Zion created by Smith himself, members of the Church began to see Salt Lake City as that city ('Great' was officially dropped from its name in 1868).

The town of New Helvetia is labeled here, just to the right of Sacramento. New Helvetia was founded by Swiss pioneer John Sutter (1803 - 1880) in Upper California in August 1839. Industries were established, including a distillery, hat factory, and a tannery, alongside several agricultural endeavors. But it was be the discovery of gold by James W. Marshall at Sutter's Mill in 1848 that forever cemented New Helvetia in history books. The gold rush caused all Sutter's workers to abandon their jobs for the gold fields and the sudden influx of fortune-seekers caused Sutter to shutter his businesses. Squatters occupied his land and by 1852 Sutter was bankrupt.

Germans were an important contingent of immigrants to California during the gold rush. Not only was the possibility of striking it rich a 'pull' factor, but the failed Revolutions of 1848 in German lands were also a 'push' factor that led to a wave of political refugees arriving in the United States. In addition to well-known figures like Sutter (a Swiss citizen born in Germany) and Levi Strauss, other entrepreneurs like Frederick A. Hihn, Henry Villard, Claus Spreckels, and Adolph Sutro (later Mayor of San Francisco) prospered by investing in railways, land, and other opportunities presented in the American West. Much of the middle classes of San Francisco and Sacramento were composed of German immigrants who arrived in the wake of the gold rush.

The Mexican-American War (April 25, 1846 - February 3, 1848) ignited after the United States annexed Texas in 1845, which the Mexican government still considered to be Mexican territory. The war ended after Major General Winfield Scott captured Mexico City. This forced Mexico to the negotiating table, which concluded in signing the Treaty of Guadalupe Hidalgo. Per the treaty's terms, Mexico recognized the Mexican Cession, land conquered in the southwestern United States by the U.S. Army during the war. As part of the treaty, the U.S. paid Mexico $15 million for the land. Negotiations on the U.S.-Mexico border continued for years afterwards, which provides a useful tool for dating maps. For instance, the present map does not include the Gadsden Purchase, which was negotiated in 1853 and took effect in 1854, suggesting that it was created not much later than that date.

This map was drawn by Friedrich Handtke and printed by Carl Flemming for the Vollstandiger Hand-Atlas (sometimes as Vollstandiger Universal-handatlas), a world atlas produced in several editions in the mid-19th century. It is cataloged among the holdings of six institutions in the OCLC, with dates ranging from early 1850s to 1865, due to the issuing of multiple editions of the Vollstandiger Hand-Atlas. Based on the borders of the United States and the territories around California, this map must date from the early 1850s or possibly the late 1840s.


Friedrich Handtke (December 7, 1815 - January 25, 1879) was a German engraver and cartographer active in the second half of the 19th century. Handtke was formally trained as a surveyor in the Prussian army. Following his discharge in 1838 he took a position as the head of cartography at the Głogów, Poland, publishing house of Carl Flemming. Initially, Handtke, in an attempt to hide his youth, inscribed his map publications as "Dr. Karl Sohr". From 1838 to 1874, Handtke and Flemming issued some 260 maps, about 168 of which Handke drew himself. Both Flemming and Handke died in 1879 leaving the powerful Flemming publishing house without its heads. Nonetheless, the firm continued to publish, and republish, well into the 20th century. Głogów, where Handtke was based, is currently part of modern day Poland's Lower Silesian Voivodeship. Learn More...

Good. Toning, soiling, and spots of discoloration in margins.