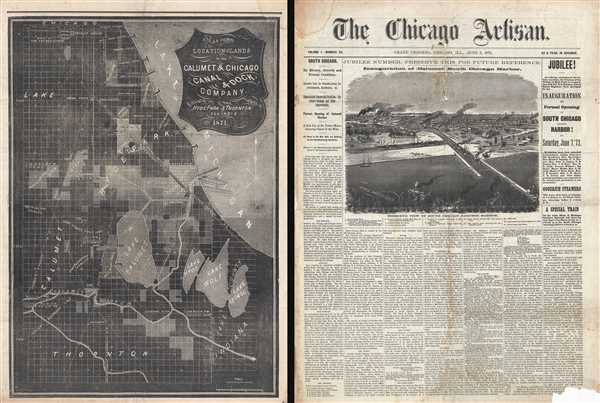 Rare and important Chicago Map illustrating the opening of the Calumet and Chicago Canal and subsequent development of South Side Chicago. Issued just prior to the Great Chicago Fire of 1871.

An extremely rare 1871 Map of Southern Chicago, including Hyde Park and Thornton, intended to illustrate the holdings of the Calumet & Chicago Canal & Dock Company. Issued just before the Great Chicago Fire, this map is intended to celebrate the opening of the Calumet Canal and Lake Calumet to shipping and trade – a major development in the history of South Side Chicago. This map, although dated 1871, was published in the June 7th, 1873, issue of The Chicago Artisan, a short lived Cook County weekly out of Grand Crossing, Chicago, Illinois. The map covers South Side Chicago from the Union Stock Yards to Thornton and from lake Michigan and the Indiana border to Washington Heights. Lands controlled by the Calumet & Chicago Canal & Dock Company are shaded in a lighter color. The map appears to have been drown by an engineer associated with the Canal and Dock Company named Baker, but we have not been able to positively identify this figure.

The map is accompanied by the full 8 page July 7, 1873 issue of the Artisan describing in detail the development of the Calumet Canal and Docks on Lake Calumet.

SOUTH CHICAGO—ITS HISTORY, GROWTH AND PRESENT CONDITION… It has long bee well known that the Calumet River is navigable for vessels that traverse the chain of lake, for ten miles from its mouth, at Lake Michigan, to Blue Island. At an early day the improvement of the entrance to the river was projected, a light-house built and other steps taken which were, however, suspended. In the year 1869, a survey was ordered by the United States Government, showing the advantages and importance of the improvements. In 1870, $50,000 were appropriated, in 1871 $50,000, in 1872 $40,000, and in 1873, $40,000, making $180,000 appropriated in all. The improvement has been under the direction of Col. D.C. Houston, U.S. Engineer. 2,000 feet of the north pier work and 1,000 feet of the south pier are now established, with a channel 300 feet in width, from the lake to the river, on the harbor line. We esteem it timely and worthy of special mention that the harbor and river have become available for commercial and industrial operations at this central point of distribution, and a market for every production…

As the article suggests the opening of the Calumet Canal transformed Lake Calumet into a major shipping depot and fostered the rapid development of South Side Chicago. Today the lake is heavily polluted and the focus of intensive cleanup projects.

The Chicago Artisan (1872 – 1889) was a weekly Cook County newspaper published out of Grand Crossing, Chicago, Illinois. Issues of the Chicago Artisan are extremely rare with only a single other example of just one issue - June 7, 1873 - being known to have survived. That example, numbered 'Volume 1 - Number 34,' resides with the Chicago Historical Society. During its short run, the Artisan was the main newspaper for Hyde Park Township, Illinois. Learn More...