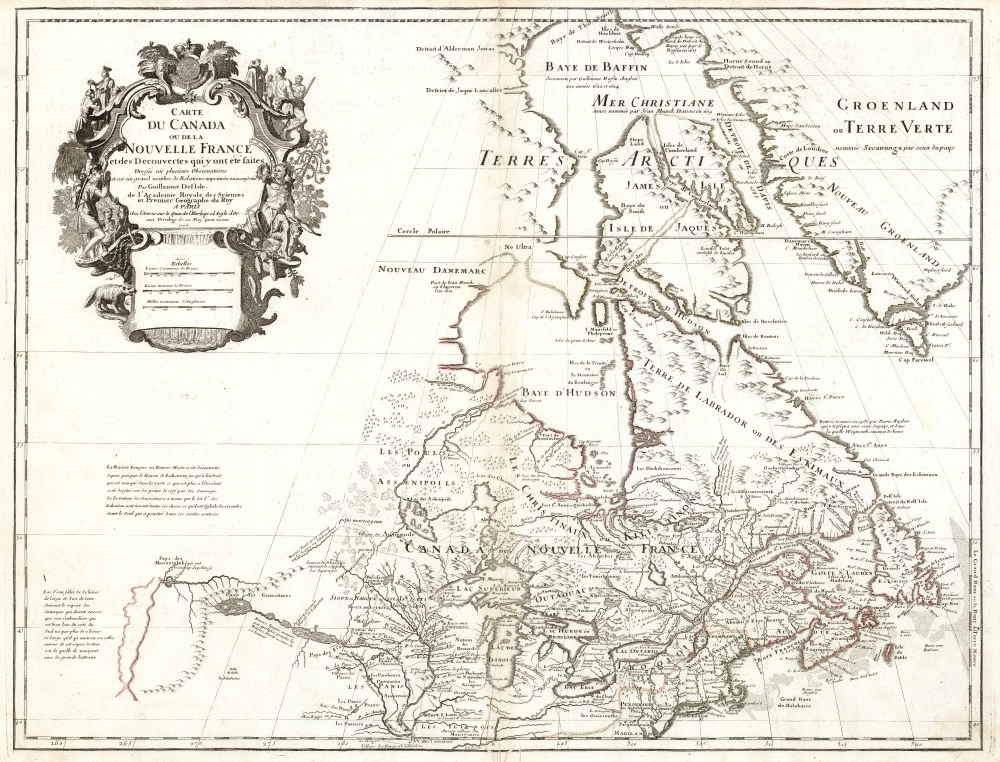 This is Guillaume de l'Isle's groundbreaking map of Canada - one of the most important maps of the north parts of North America. When De l'Isle first issued this map in 1703, it was the most sophisticated cartographic representation of this region yet published, referencing various elements from the most recent explorations including the Jesuit Relations, Pierre Le Moyne d'Ibervile, Pierre Le Sour, and Baron de Lahontan.

This map proved highly influential and was one of the best maps of this region until the explorations of late 18th and early 19th century. This example, updated with the mapmaker's new title as Royal Geographer, was printed in Paris in about 1718. Coverage extends south to include the part of the United States north of the Chesapeake, including all five of the Great Lakes New England, but De l'Isle's primary focus is on the French territory of Canada, including Hudson Bay, Baffin Bay and a large part of Greenland.

One of this map's most intriguing elements is De L'Isle's treatment of the speculative explorations of the Baron Louis Armand de Lahontan, which dominate the lower left. Lahontan (1666 - 1715) was a French military officer commanding the fort of St. Joseph, near modern day Port Huron, Michigan. Abandoning his post to live and travel with local Chippewa tribes, Lahontan claims to have explored much of the Upper Mississippi Valley and discovered a heretofore unknown river, which he dubbed the 'Longue River'. This river he claims to have followed a good distance from its convergence with the Mississippi. Beyond the point where he personally traveled, Lahontan wrote of further lands along the river described by his American Indian guides. These include a great saline lake or sea (ghosted in here) at the base of a low mountain range. This range, he reported, could be easily crossed and from this point further rivers flowed westward to the mysterious lands of the Mozeemleck, and presumably the Pacific.

Lahontan's work has been both dismissed as fantasy and defended as erroneous speculation by various scholars. It is entirely possible that Lahontan faithfully described indigenous reports of the Great Salt Lake, or even the distant Pacific. But De l'Isle himself noted the possibility that 'Mr. Lahontan has invented all of these things, which is difficult to resolve, he being the only one to penetrate this vast country.'

A Beautiful and Revealing Cartouche

Despite the general trend towards simpler decorative elements in De l'Isle's work, the cartouche for this map - the work of Nicholas Guérard - is beautifully engraved. It is flanked with images of Native Americans - one woman with a papoose on her back, and a fierce warrior displaying a scalp. In a nod to the predominance of Jesuit sources for French geography in the region, the cartouche also includes vignettes of missionaries preaching to the Natives. The cartouche also features Canadian fauna, including an alarming beaver, while a goose lurks in the shadows.

This map was compiled by Guillaume de l'Isle who first published it in 1703. This is the c. 1718 5th state of that first plate, engraved and printed in Paris. In its various editions the map is well represented in institutional collections.


Nicolas Guérard (1648-1719) was a French engraver and etcher active in Paris at the end of the 17th century and the beginning of the 18th. Nothing is known of his background or education. He produced the cartouches for several mapmakers, including De Fer, De l'Isle and Nolin. His son Nicolas Junior (dates unknown) continued in the family trade, working as late as 1750. Learn More...