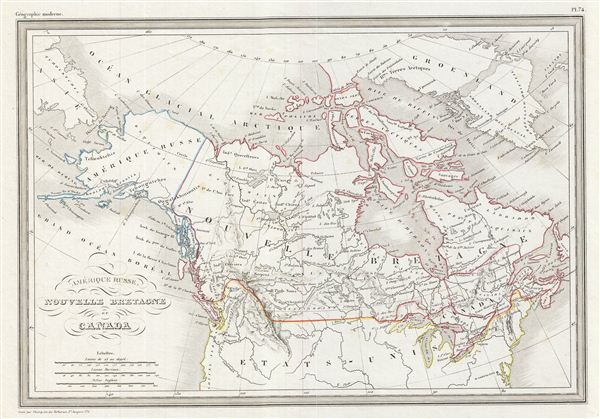 This is a fine example of Conrad Malte-Brun's 1843 map of Canada and Alaska (Russian America). It covers from the Arctic Ocean to the United States and from the Bering Sea to Newfoundland. This map identifies American claims to parts of British Columbia – a clear indicator of where French popular opinion rested regarding the Americas. These claims, by which United States territory extended northwards well into the fur-rich lands of British Columbia, eventually led to the '54-40 or Fight' dispute between the United States and Britain.

Greenland is divided into two parts, based on the belief that the ice sheet covering the country conceals two (now believed to be three) separate land masses joined by glaciers. According to the earliest written accounts, the Russians were the first europeans who reached Alaska and eventually became permanent settlers. The modern Canadian provinces and territories were under British and French control from the 16th century, until France gave up its claims in the Treaty of Paris in 1763. Canada would remain a collection of British colonies until its confederation in 1867, when the British colonies of Ontario, Quebec, New Brunswick and Nova Scotia would become Canadian provinces. Boundaries are color coded according to regions and territories. Various cities, towns, rivers, islands and other topographical details are marked, with relief shown by hachures. This map was issued as plate no. 74 in Conrad Malte-Brun's 1843 Precis de la Geographie Universelle.