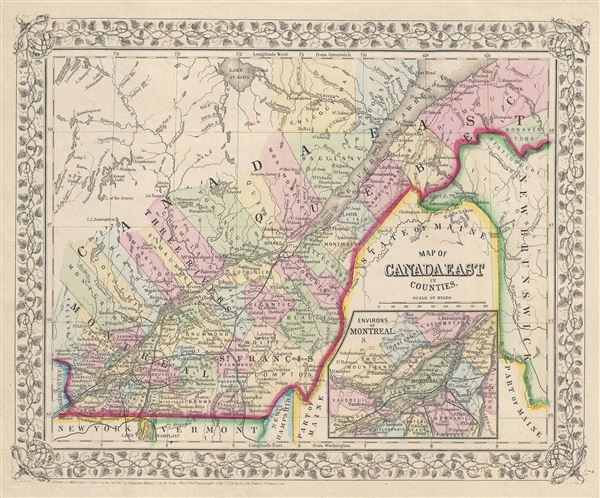 This is a beautiful example of the legendary American map publisher Samuel Augustus Mitchell Jr.'s 1868 map of the Canadian province of Quebec, or Canada East. Centered on the St. Lawrence River Valley, this map covers from Montreal to the mouth of the St. Lawrence, north as far as Lake St. John and south to the United States border. An inset map on the lower right quadrant details the environs of Montreal.

Canadian provinces and territories were under British and French control from the 16th century, until France gave up its claims in the Treaty of Paris in 1763. Canada would remain a collection of British colonies until its confederation in 1867, when the British Province of Canada was divided into Quebec and Ontario and the British colonies of New Brunswick and Nova Scotia incorporated as Canadian provinces. With the signing of the 1854 Treaty of Reciprocity between the United States and Canada, this area experienced a period of sustained growth and prosperity. The increased international trade that flowed into Quebec via the Hudson Valley trade corridor inspired popular interest in the region. Montreal, Three Rivers, and St. Francis in particular benefited from the cross-border trade.

This map also identifies various cities, towns, rivers and an assortment of additional topographical details. Map is color coded according to political boundaries with elevation rendered by hachure. One of the most attractive American atlas maps of this region to appear in the mid-19th century. Features the vine motif border typical of Mitchell maps from the 1866 - 1882 period. Prepared by S.A. Mitchell for inclusion as plate no. 7 in the 1868 issue of Mitchell's New General Atlas. Dated and copyrighted, 'entered according to Act of Congress in the Year 1868 by S. Augustus Mitchell Jr. in the Clerks Office of the District Court for the eastern District of Pennsylvania.'