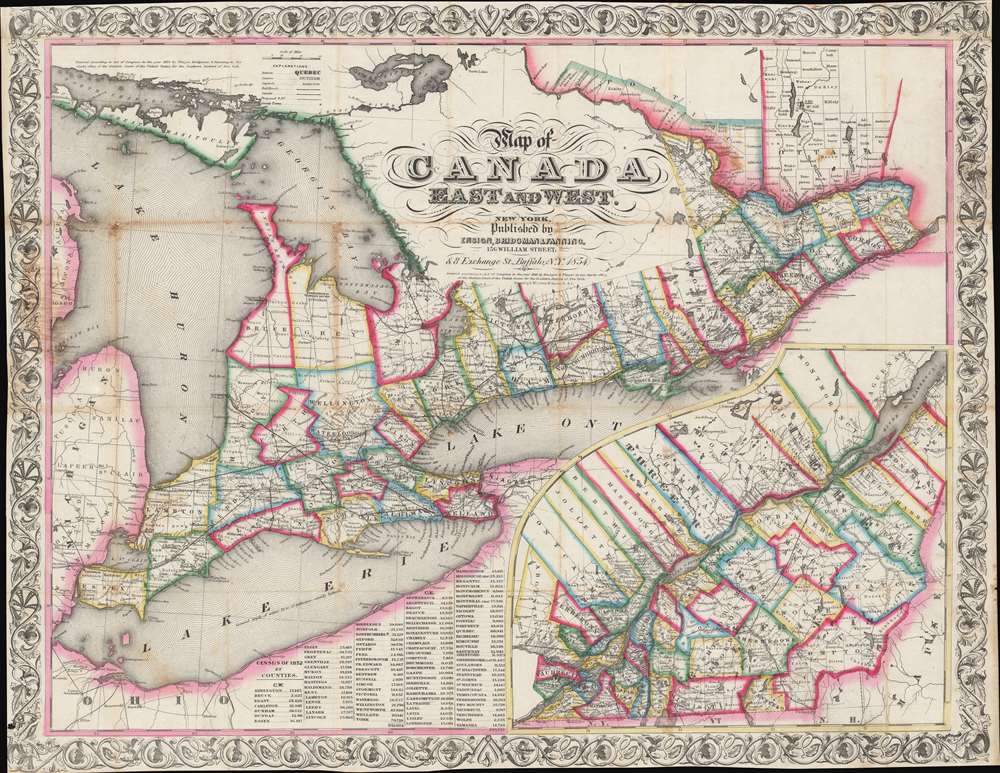 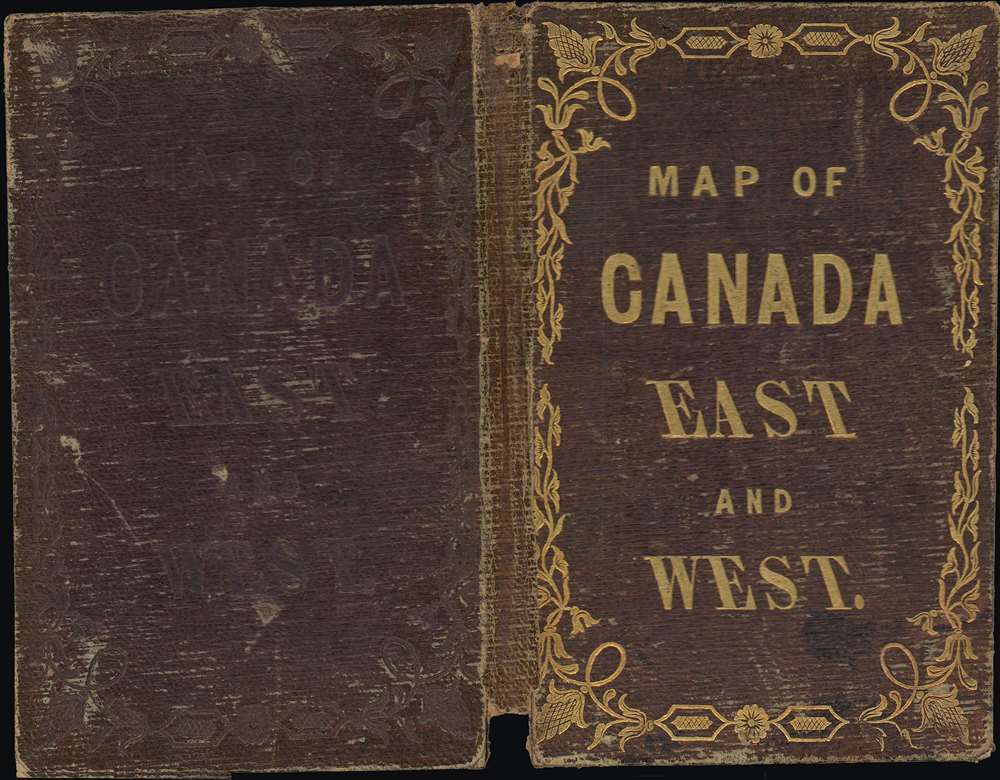 Ensign's idiosyncratic style, with Canada as its subject.
$950.00

This is a stunning, hand-colored 1854 Ensign, Bridgman, and Fanning map of Canada. The map depicts the province in detail, including the clear demarcation of individual counties.

This map illustrates administrative divisions of western and eastern Canada (formerly Upper and Lower Canada) to the county level, as well as waterways (including canals), cities, towns, and railways (including proposed railways). The more densely populated western Canada composes the main map while eastern Canada occupies an inset at bottom-right.

Data from the 1852 census is included, not present in earlier editions, indicating that the population of the Province of Canada was just under 900,000. The close interconnection between Canada and the United States, despite their relatively recent hostilities during the American Revolution and War of 1812, is evident, especially at Buffalo (where Ensign had an office) and Detroit.

It is noteworthy that the map indicates the locations of Hudson Bay Company trading posts at top-left, in what is now central Ontario, illustrating the sparse white settler presence. For instance, Sudbury, the largest city in the region, was built on land that had only been leased from the Ojibwe people in 1850, and the white settler population remained extremely small (consisting of missionaries and traders) until the Canadian Pacific Railway was built through the region in the 1880s.

Canada's Evolution from Colonies to Confederation

This map was made after the 1841 union of Upper and Lower Canada to form the Province of Canada. New Brunswick and Nova Scotia were not added until 1867, with other territories added subsequently, explaining their absence here. Canada had recently seen uprisings (in 1837) pushing for greater political reforms as well as more autonomy for French-speakers in Quebec. The union of the two Canadas and the institution of 'responsible government' was meant to address these concerns, but discontent remained among supporters of the uprisings and Tories opposed to them. Tories burned down the Canadian Parliament building in 1849 to protest what they saw as an overly generous amnesty to former rebels. Additionally, migration from the British Isles increased rapidly in the 1830s-1840s, due to land clearances and famines in Scotland and Ireland, which quickly had a political impact. In the mid-1860s, the Province of Canada confederated with New Brunswick and Nova Scotia and greater autonomy was granted to the newly-created entity, the first Dominion of the British Empire.

This map was made by Edward Ensign with his partners Bridgman and Fanning and was printed by David McLellan in 1854. It is based on an earlier edition published in 1848 by Ensign and Thayer. An intermediate edition was published in 1853, explaining the copyright at top-left, and additional editions may have been published in the intervening years (late 1840s – early 1850s). All editions are quite rare, with the OCLC indicating six institutions holding any edition of the map. The current edition has no known history on the market.


David McLellan (September 20, 1825 - July 26, 1867) was a Scottish-American lithographer and printer active in New York City in the middle part of the 19th century. McLellan was born Pollockshaws, Renfrewshire, Scotland. He lived in Glasgow for about 20 years, where he mastered printing and lithography under his father James McLellan (1798 - 18??). In 1847, he immigrated to New York City with his brother, James McLellan. David initially printed under his own name, 'David McLellan (1851 - 1854), the with in partnership with his brother, James, as 'D and J. Mclellan' (1855 - 1860). Aging under his own name during the Civil War from 1862 -1863. Then as 'David McLeland and Brothers' (1864 - 1866). He joined the mostly Scottish 79th 'Highlander' Regiment, with whom he participated with the rank of 'Major' in the American Civil War (1862 - 1865). During his long career as a New York lithographer, McLellan worked with many prominent publishers, including J. H. Colton, Edward Valois, James Ackerman, the U.S. Coast Surrey. After his death in 1867 he was interred in Greenwood Cemetery. The McLellan printing business continued after his death under the imprint of John McLellan (1867 - 1868) and J. (John) and R. (Robert) McLellan (1869). No further McLellan work is known after 1869. Learn More...

Good. Foxing along fold lines. Some loss at fold intersections.