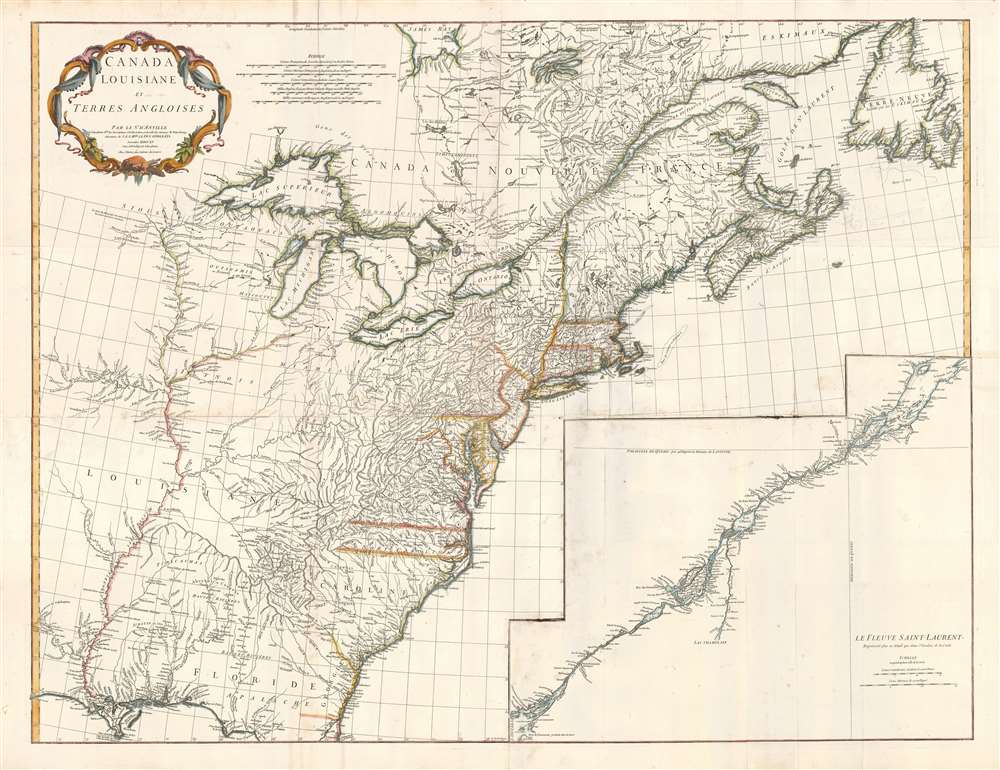 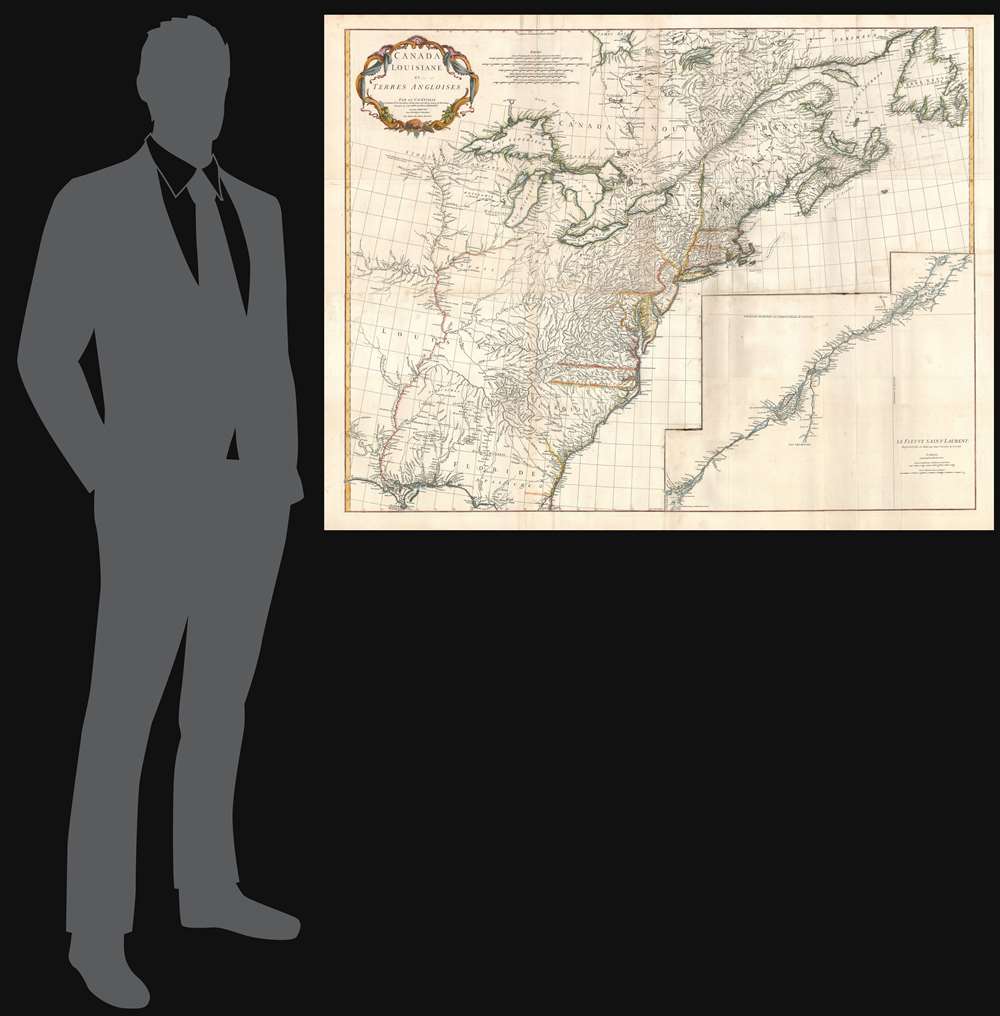 This is Jean-Baptiste Bourguignon d'Anville's 1755 map of North America from the Mississippi watershed eastwards. It spans from Newfoundland and James' Bay to St. Augustine, Florida. The map reaches westward as far as modern day Texas, and extends eastward to embrace Newfoundland. It details the English colonies along the Atlantic seaboard, as well as French claims in Louisiana (the Mississippi Valley) and modern day Canada. Elevation is rendered in profile with fortifications, towns, and American Indian villages identified. A large inset centered on Montreal details the course of the St. Lawrence River from the Isle Aux Coudres to Lake Ontario.

A Timely Response to the Mitchell Map

The map is a response to the English Mitchell map, which was published the same year, and upon which to a certain extent the D'Anville is based. This French rebuttal removes references to English factories and settlements in some contested areas; at the same time, it adds detail from French sources which would not have been available to Mitchell. This results in D'Anville's superior representation of the Great Lakes, as noted by Tooley.

D'Anville's map is significant on many levels, not the least of which is its presentation, from a French perspective, of the territorial alignments and claims of North America shortly following the outbreak of the French and Indian War (1754 - 1763). Most consider the French and Indian War to be a microcosm of the global Seven Years War. Hostilities in America, nonetheless, began prior to the broader engagement in Europe. The American theatre was distinct in being largely fought by proxy, by parties only loosely aligned with the French or English - most specifically American Indians and lawless frontiersman, who had their own political agendas.

The French and Indian War

The war began with French incursions into western Pennsylvania and other territories claimed simultaneously by French, English, and American Indian forces. Just prior to the war, the French, in the interest of broadening their hold on the lucrative fur trade, established a series of forts, all of which are here noted, along the length of the Mississippi and further east, including Fort Duquesne (here Fort de Quene, Pittsburgh), Fort de la Presquisle, and for Le Beouf (here, Fort de la Riv Jaus Beufs). D'Anville accordingly recognizes British claims only inland as far as the Appalachian Mountains, beyond which place names take on a noticeably French character. These last three forts occupied particularly contested territory under the control of the powerful British-allied Iroquois League. The most contested was Fort Duquesne, which stood at the Forks of the Ohio (modern day Pittsburgh) in direct opposition to another fort then being constructed by the Ohio Company, a trading and land speculation firm established by prominent Virginia colonials, including George Washington. The Virginia colonial governor responded to Duquesne by sending then Lieutenant George Washington and a band of Virginia militiamen to harass the French. The resulting Jumonville Affair, in which Washington oversaw an attack on a French-Canadian diplomatic force led by Joseph Coulon de Villiers de Jumonville to warn the Ohio Company fort builders away from French claimed territory. The slaying of Jumonville and several other French diplomats prompted a response from French forces at Fort Duquesne, leading to Washington's retreat and construction of Fort Necessity, really little more than a palisaded shack, marked here just south of Fort Duquesne. These events, all of which occurred in May of 1754, were said to have increased hostilities in Europe and led to the start of the Seven Year War in 1755.

The Missouri River is mapped as far as just beyond the fork of the Kansas River; the settlement of Kansez is shown at the fork. The mapping of the Missouri appears to be derived from the explorations of Étienne de Veniard, Sieur de Bourgmont. He, in 1723, established Fort Orleans, whose location is marked abandoné (it was either abandoned or massacred in 1726.)

Second Only to the Mitchell

Beyond the political agenda of this map it is significant as being one of the finest and most heavily detailed maps of North America to appear in the 1750s, second only to the 1755 Mitchell map in detail despite being, in some ways, cartographically superior. Drawing on both French and British cartographic data, Anville identifies countless American Indian tribes, many of which, like the Sioux and Missouri, the British had only vague knowledge of. Moreover, d'Anville also maps swamps, rapids, fords, abandoned villages, and even the ancient remnants of mound builder culture in the Ohio Valley. Anville notably does not include Mitchell's fictional Lake Superior islands.

This map was originally published to accompany the pamphlet entitled Memoire sur la carte intitulee: Canada, Louisiane, and Terres angloises. It was also published in four parts for Anville's Atlas General. The map is well represented in institutional collections.