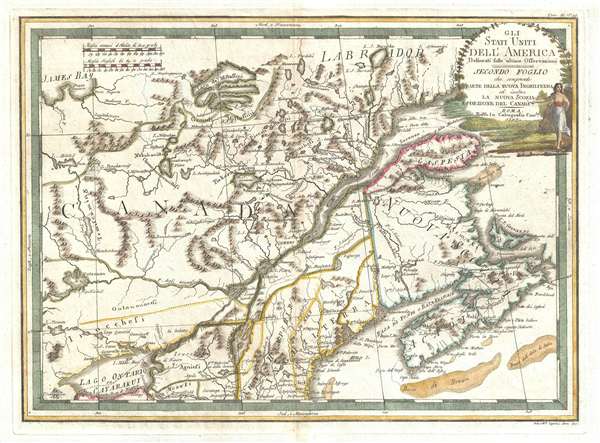 A very nice example of Cassini's stunning 1797 map of Canada and New England. Centered on the St. Lawrence River, this map covers from James Bay to Nova Scotia and from Lake Ontario to Labrador. It includes the modern day states of Maine, New Hampshire, Vermont, New York and the Canadian provinces of Quebec and Ontario. Some of the shoals off Nova Scotia are noted. The map provinces excellent information regarding American Indian tribes in Canada and New York. It also names numerous coastal Maine towns from Portsmouth, New Hampshire, to York, Penobscot, Wells, Brunswick, Kittery, and more.

Cartographically Cassini derived this map from the 1778 Zatta 12 sheet revision and expansions of the John Mitchell's seminal 1755 map of the eastern part of North America. Cassini published six maps of United States regions based upon Zatta's work, of which this is map no. 2. This work was published in Cassini's 1797 Nuovo Atlante Geografico Universale. Today all maps from this series are highly sought after for their exceptional beauty and fine engraving.